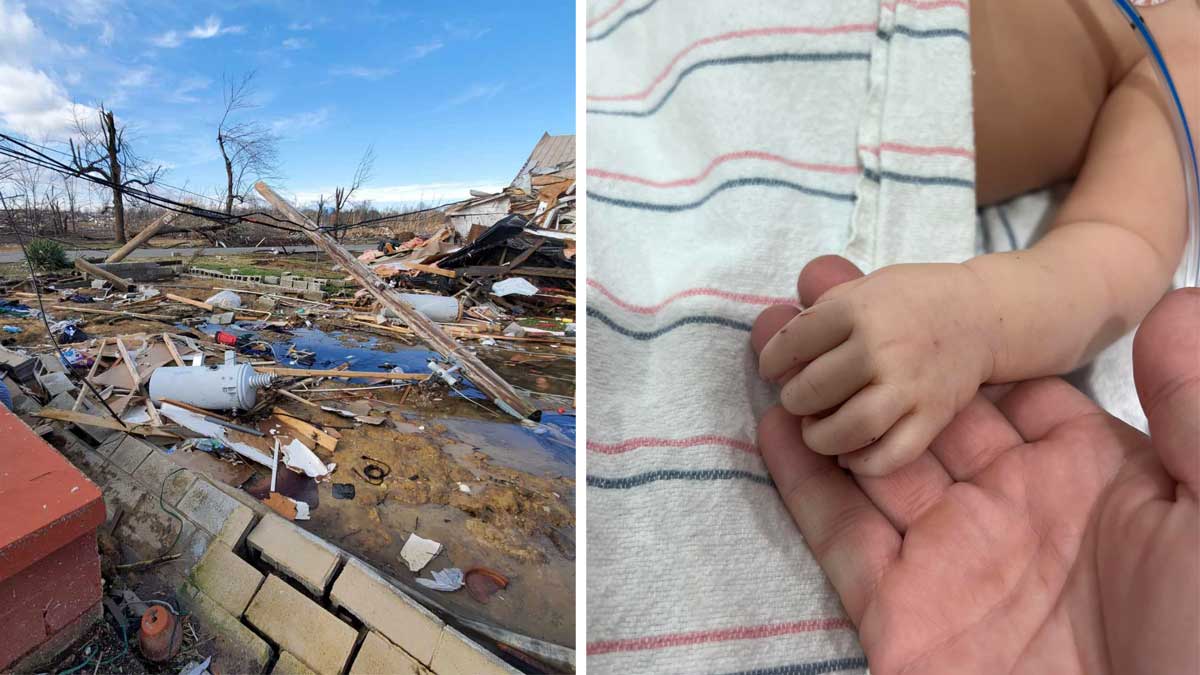 Sixty-four people have been confirmed dead, and more than 100 remain missing after numerous tornadoes swept through Kentucky over the weekend.

In a Monday morning press conference, Kentucky Gov. Andy Beshear said the death toll is expected to climb as crews continue with their search and rescue efforts.

Some images may be difficult to view.

Among the dead is a 2-month-old baby who initially survived the horrific act of mother nature, but later died due to her injuries.

As the storm approached Dawson Springs, Jackie and Doug Koon rushed over to Jackie’s mother’s home, where the couple’s oldest son was staying.

Everyone huddled together in a bathroom and took shelter as the tornado barreled its way towards them.

“We put my two boys in the bathtub with pillows on top of them,” Doug told MSNBC. “We just sat down beside the bathtub and put pillows all on top of us. We had our 2-month-old baby in the car seat. We left her in the car seat thinking that would be a little bit more protection for her.”

Then the tornado arrived.

“We all went flying and ended up way on the other end of our neighbor’s house,” Jackie said, according to Kentucky.com.

When Doug was finally able to look up, he saw his four-year-old son standing in the debris, screaming for him.

“It’s the most traumatic thing I’ve ever been through.”

Doug frantically worked to round up his injured family members, who all thankfully survived the tornado, and brought them to the hospital.

The tornado had deposited Oaklynn out into the open, but she was still in her carseat.

Unfortunately, Oaklynn’s condition began to decline. She was life-flighted to a hospital in Louisville after experiencing what first appeared to be a seizure.

She was intubated after doctors believed she suffered a stroke due to an injury to the veins in her neck, according to a post on Facebook.

As the family celebrated their son’s release from the hospital, they continued to pray for Oaklynn’s recovery. But the couple shared a heartbreaking update on Sunday.

Within hours Oaklynn died from injuries she sustained during the tornado.

The rest of the family has been able to return home, the Koon’s home was left untouched while Jackie’s mother’s home was destroyed, to finish their recovery.

“Please keep the family in your thoughts and prayers.”

My heart breaks for the Koon family and every other family who has experienced death and destruction from the tornadoes.

Please share and keep these families in your prayers.