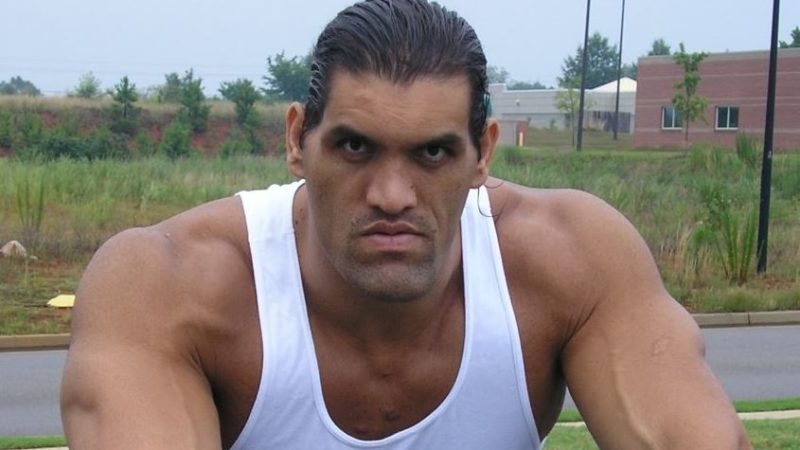 I must admit that I have never been a huge wrestling fan – but not even a novice like me could forget some of the greatest superstars in WWE history.

Hulk Hogan is, of course, one of them, but I also remember an incredibly fascinating guy called “The Great Khali.”

Khali was amazing at the beginning of his WWE career, but by the end of his time there it felt like they had made him into more of a comic relief character.

The truth is that there is a spellbinding and unique story behind the giant, muscle-bound figure, real name Dalip Singh Rana.

Upbringing and road to fame

Dalip Singh was born in 1972 in the small town of Dhiraina, northern India. He grew up alongside his six siblings in truly poor conditions.

As a young boy, Dalip had to help support his family. He had hardly any education and had to take many odd jobs to contribute. Of course, there was nothing strange about children helping out; that’s what it looked like for several of the 24 families residing in the small village of Dhiraina.

But Dalip certainly stood out in another way, one that made it impossible for those around not to notice. After birth, Dalip was diagnosed with acromegaly, a condition which causes gigantism and chin protrusion.

The big man with the big heart was a well-known figure in the area where he grew up. Before long, fate would turn him into a familiar face on a much larger stage.

After working as a roadside laborer, Dalip decided to move to Shimla. There, he was hired as a security guard and was soon discovered by Punjab’s former police chief Mahal Singh Bhullar.

”He asked me ‘Why I was working so hard even after my shift was over’. My response was that ‘unlike others, I had a bigger stomach to fill and thus needed to work harder than the rest’ and that landed me a job with the Punjab Police,” The Great Khali told Daily Pioneer in 2015.

The police chief was quite famous for coaching several employees of Punjab Police to become international sportspersons. He offered Dalip a job within the force in 1993, the first step on Dalip’s road to the wrestling scene. Dalip was initially hesitant to take the job as he didn’t want to move from his family. But when his brother was offered a position with the Punjab Police, Dalip decided to say yes.

He started training at a local gym and soon made a name for himself – a name that would reach as far as the United States.

Impact in the States

In 1999, Dalip Singh Rana immigrated to the US for better opportunities. He joined All Pro Wrestling (APW) boot camp as a trainee and the colossal wrestler, described as ”extremely religious,” soon became comfortable with the everyday life of an American.

He made his debut as a professional wrestler in 2000 for All Pro Wrestling (APW). Back then, Dalip used the ring name ”Giant Singh.”

In his first match, he teamed up with Tony Jones in a fight against ‘West Side Playaz,’ and it was evident that the audience loved the gigantic and vigorous powerhouse from India. Standing at 7 foot 1 inch and weighing 157 kilograms, he significantly impacted the wrestling scene during his early years in the business.

“For the first time in my life I could buy a TV, a decision that changed my life forever I not only got introduced to wrestling but decided to make it my passion and my profession,” he said of his early career.

In 2006, he signed a contract with the WWE, one of the major national wrestling organizations in the country. After putting pen to paper, ”The Great Khali” became the first Indian professional wrestler to sign with the organization. His debut became a memorable event when he went up against the legendary ”The Undertaker.”

One can argue that his career peaked when he won the World Heavyweight Championship in 2007. The gigantic Indian became a sensation overnight in his birth country and for all the wrestling fans in the U.S.

“You’d probably understand the kind of reaction winning a World title in WWE would generate in a wrestler. It was the proudest moment I’ve felt in 35 years. For an Indian, getting to WWE is a big deal. Winning the title was something else; my dream came true when I won the World Heavyweight title in WWE,” Dalip told Sportskeeda.

After winning the heavyweight champion title, Dalip’s career started to decline. He lost the belt to Batista in 2007, and Dalip decided to take on another persona – he was promoted as the Punjabi Playboy for a while.

At the end of his professional wrestling career, Dalip was often used as a punching bag for the new, upcoming talents in WWE. He suffered many losses and left the organization after his contract expired in 2014.

”The Great Khali” no longer filled the arenas, and he was kind of forgotten – but he still had a great love for the sport, and his commitment would soon lead to many essential steps for promoting wrestling in India. Only a year after leaving WWE, Dalip founded his own wrestling academy, based in Jalandhar, India. The whole idea of the school was to get youngsters off the street and give them better opportunities in life. At best, it would also help bring out more successful athletes from India, where wrestling is a minor sport.

“I want to get them into sports, and see that India produces more athletes like The Great Khali”, he said.

Even as a young man, family meant a lot to Dalip. Today, he’s married to Harminder Kaur, an Indian-American actress. Many people describe him as a doting husband and a loving father.

Just like her husband, Kaur traveled to the United States hoping to succeed in her profession. She came to the US to pursue a career in acting, managing to land a few roles. But it was through her marriage to ”The Great Khali” that she became well known.

The couple tied the knot in 2002 in what was an arranged marriage, according to Eleven Magazine. Twelve years after their wedding, Dalip and Kaur welcomed their daughter, Avleen. She was born on February 26, 2014, and her father often publishes cute pictures of himself and his beloved together.

It’s pretty heartwarming to see another, beautiful, side to this fearless giant – best known for breaking opponents’ bones.

In an interview with Telegraph India, Dalip revealed that the COVID-19 pandemic has seen him spend even more time with his family.

In recent years, Dalip has made some brief comebacks on the wrestling scene, and has also appeared on various movies and TV shows.

As of today, it’s his new, incredible physique that’s getting most of the attention. While other former elite athletes step down, Dalip has stepped up. After leaving WWE, he lost a lot of his muscle mass, but he promised himself that he would return to his former physique.

At the grand age of 48, Dalip is still a fitness monster. He has managed to maintain his fantastic shape thanks to a strict diet and hard training.

When Dalip wakes up in the morning, he takes a walk and enjoys several glasses of water. His breakfast includes different fruit juices, two drinks of milk, eight eggs, and some dried fruit. Usually, he also eats bread and chicken for breakfast.

”Also, I am a big chicken lover, I can eat chicken in all forms, and I love KFC,” he says.

As you can see, the 48-year-old former wrestler basically eats everything – but his enormous food intake requires a very tough training program. He has special weekdays where he exercises different muscle groups, and he also makes sure to train cardio a few times a week.

During his career, The Great Khali earned a lot of money, and he can look back on a wonderful and exciting life. Once, he struggled to put food on the table – but today he has an estimated net worth of over $6 million.

”I started by keeping small, simple and short-term achievable goals for myself. I never thought that I would become this huge global icon, The Great Khali, or do brand endorsements, work in Hollywood and Bollywood. I wasn’t aiming for this. My area of concern was as simple as any regular Indian’s is,” he says.

At the height of his wrestling career, he earned $650,000 per year and had a bonus of $300,000 for winning a match. Today, ”The Great Khali” also has other valuable assets – such as his own wrestling academy in India.

He’s seen some setbacks, of course, like when he underwent tumor-removal surgery in 2012, but overall, this legendary wrestler seems to be living a good life.

I think it’s amazing that he’s so committed and wants to give something back to other youngsters in his home country.

Do you remember this giant man from India? I must say that I sat with a smile when I saw what he looked like today.

Feel free to share your opinions in our comments field.