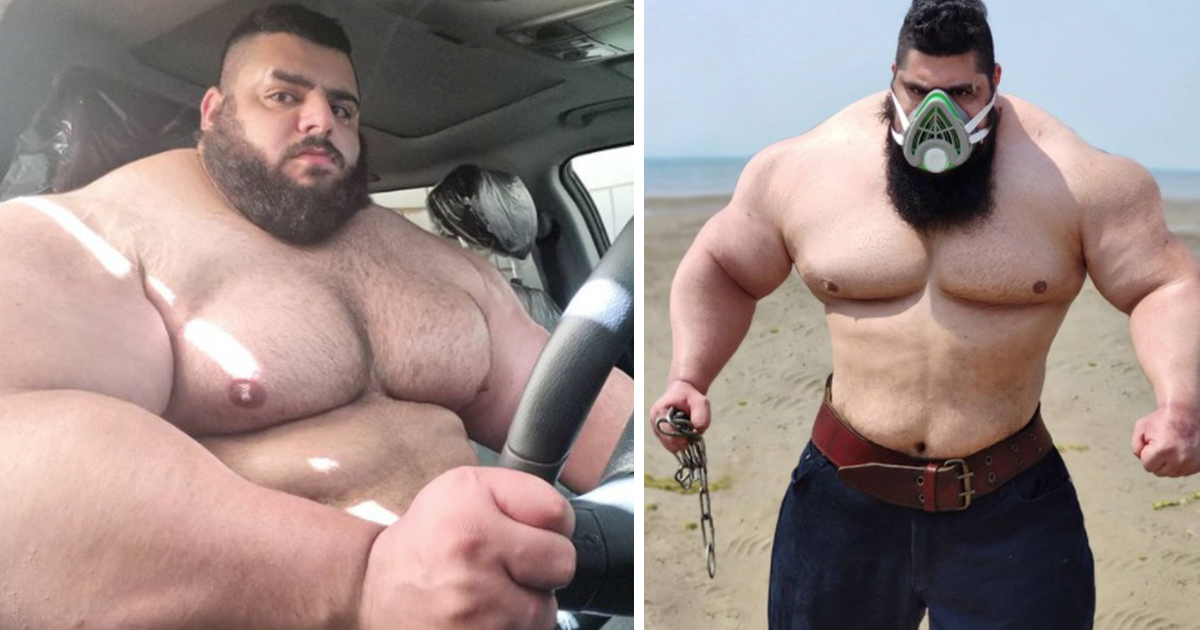 Some people become famous for changing the world, others reach stardom for their iconic movies. Some celebrities become influential for their way of connecting to ordinary people.

”The Iranian Hulk” has become an Internet phenomenon thanks to his enormous size and muscles. Just one look at his enormous physique says a lot about why people want to know more about this mystique colossus.

The truth is that there’s a spellbinding and unique story behind the giant, muscle-bound figure, real name Sajjad Gharibi.

”The Scariest Man on the Planet”, ”The Persian Hercules” and ”The Iranian Hulk” – bodybuilder Sajjad Gharibi goes by many nicknames. He’s become something of a phenomenon on social media simply because of his size.

Back in 2016, the young bodybuilder started to reach celebrity status on after posting some remarkable photos on Instagram.

Gharibi was born in the southwestern part of Iran, in a town called Ahvaz – infamous for being the world’s most air-polluted city due to its oil industry.

“I am an Iranian citizen with traditional values of Persian upbringing surrounded by a close-knit family and also great friends from all around the world who have supported me every step of the way in these difficult times,” he said in an interview.

Born on December 19, 1991, Gharibi will soon celebrate his 30th birthday. According to LadBible, he has a Bachelor of Commerce degree from Azad University in Bushehr – his current hometown.

The 29-year-old Iranian seems to have been interested in bodybuilding and powerlifting for a long time. Apparently, he’s been hired to do movies over the years – but it’s as a bodybuilder he wants to succeed.

”As a sportsman throughout my career all the cost and expenses and fees have been covered and paid from my own budget without to received any support or help from Iranian authorities or sports organizations and unfortunately there are plenty of other talented young people in Iran who suffers exactly in a similar way to my situation despite I’m trying my best to find a sponsor,” he says.

As everyone can see from the pictures he shares on his Instagram page, Gharibi is a powerful man with an exceptionally muscular frame. The stats also show that ”The Iranian Hulk” is something out of the ordinary – Gharibi stands 6 feet 2 inches tall and weighs 390 pounds.

His 600,000 followers on Instagram can follow Gharibi’s daily routines, and people are, of course, interested in how he builds muscles and what he eats to keep his physique. It’s not that easy to get information about his daily diet, but ”The Persian Hercules” has left a few hints about what he eats every day.

He usually washes down his mega breakfast with an energy drink.

On Gharibi’s Instagram page, he has often posted pictures of what he eats – so after a bit of detective work, we’ve been able to figure out what he prefers for lunch and dinner.

It turns out, there’s no extraordinary secret to his diet. The Iranian Hulk seems to like very high protein foods such as chicken, sausages, canned fish, and peas. He also appears to be a big fan of fruits – strawberries, kiwi, apples, bananas, and citrus fruits.

Many of his fans think he is just a nice dude who eats healthy, exercises very hard, and happens to be reminiscent of the Hulk. But others have been more critical, and actively question how he could have become so gigantic.

Some have speculated that the 6 feet 2 inches tall and 390 pounds heavy bodybuilder has used alternative growth methods. It has also been said that the Iranian Hulk has more fat than muscles and photoshops his photos. So far, however, no evidence has emerged to support that theory.

If we look at some of his photos on social media, a picture of a familiar and child-loving man emerges. Recently, he showed off “Baby Hulk.” According to News.com.au, Gharibi often visits children’s hospitals in Iran to give hope to sick kids.

Although Gharibi certainly enjoys the attention on social media, he has a serious goal with his training and he’s currently investing in a career in the fight business. ”The Iranian Hulk” has been challenged several times.

In 2019, UFC star Brian Ortega said he would smash “the Iranian Bulk” – despite weighing about 240 pounds less than the Iranian. There was also an agreed fight with “the Brazilian Hulk,” Romario dos Santos Alves – but it was canceled for unclear reasons and the bout never went ahead.

”Having accepted his challenge, I soon realized that this coward Brazilian Romario( Brazilian hulk) refused to fight with me in the cage.
I should have known he wouldn’t have the guts to face me,” Gharibi said.

Despite seemingly wanting to, Gharibi has never stepped into the octagon or the boxing ring to meet another fighter.

But now, that is about to change.

After several years of speculation, it’s become official. “The Iranian Hulk” will face the English bodybuilding giant Martyn Ford, in April 2022.
Dubbed as the “heaviest fight in history,” Gharibi and Ford are set to clash in the ring on April 2 in London. Ford and Gharibi have now both launched their respective PR machines to create hype around the event.

”YES THIS IS PERSONAL. Beautiful white teeth one side you with all your sponsors front of me with dear fans all around the world who support and motivate me. Different conditions it’s not important even if the worst conditions I have but Iranian hulk never stops,” Gharibi wrote in one of his Instagram posts.

Martyn Ford hit back and added that there is unlikely to be any technical battle in the ring.

“BUT I will promise you that I will bring my absolute EVERYTHING and turn this into an EVENT you will NEVER forget,” he said.