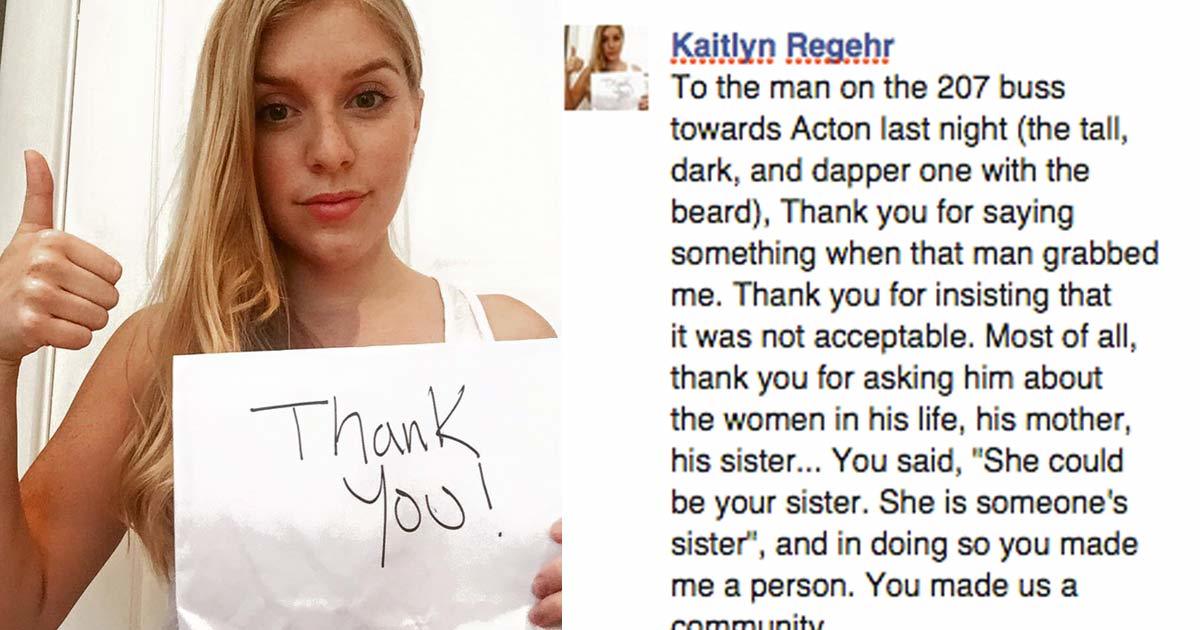 It’s a phenomenon that very sadly many women- and also men- are familiar with: sexual harassment and assault. Many admit feeling too afraid or hesitant to do anything on the spot, due to feeling momentarily shocked. But the remnants of the incident often linger beyond the moment — and can be very traumatic. But for one young woman, that kind of outcome may have been eased at least a bit. And it’s all thanks to a perfect stranger, who intervened on her behalf after a man recently grabbed her behind on a bus. This story gave me goosebumps. What a guy! I think he quickly restored her faith in humanity. I hope the stranger steps forward. At least, I hope he knows how proud of him thousands of women and men are thanks to his simple but important gesture.

“I know that sounds ridiculous, [but] I did what most women would do, just move away, and hope that he doesn’t get off the bus and follow you,” she told Buzzfeed.

“The guy intervened and it got a little bit heated, but he was clearly saying it loud enough for the bus to hear,” she adds. “He also said ‘Do you have any women in your life? Do you have a mother, a sister?’, and I was really touched by that, he kind of humanised the situation. But while I was getting off [the bus], I didn’t get to thank him properly.”

Newsner stands against all forms of sexual harassment. We couldn’t be prouder of the man stranger that stood up for Kaitlyn, and also think her gratitude toward him is a fantastic reflection of her humility. Please like and share this story if you feel the same.