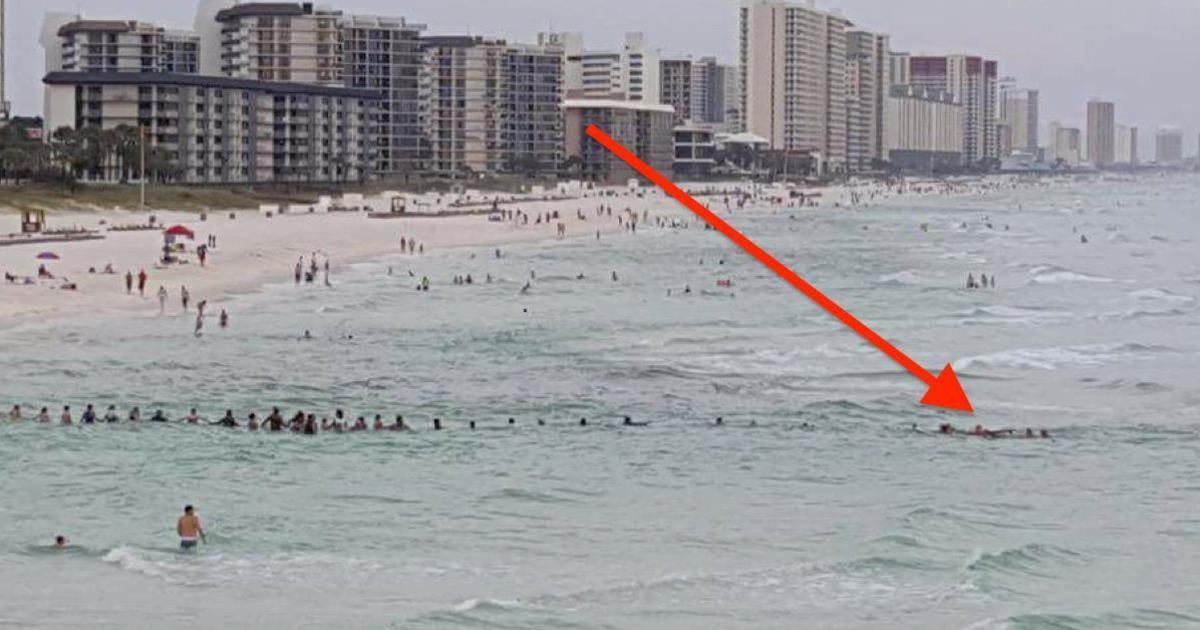 It was a sunny day at the beach like many sunny Christmas days are in Panama City, Florida.

People were bathing and enjoying the beautiful weather, some were enjoying a drink and between the noise of the waves you could hear children laughing and playing.

But suddenly, the calm was broken when two tourists suddenly turned their eyes to the horizon.

Out in the ocean something was moving that caused Jessica Simmons to freeze.

“It must be a shark,” she thought.

But when she heard the anxious crying and screaming, she began to understand what was really happening.

Fifteen minutes earlier, a woman named Roberta Ursey, her husband, her mother, her sons and brother-in-law had gone down to the water to cool down and take a swim.

Roberta Ursrey was just getting out of the beach when she turned around to look for her sons. Then she noticed that they were much further away from the beach than she had remembered.

She became worried and began to swim back into the water.

“They were screaming and crying,” she told CBS6. “They were stuck. They couldn’t go nowhere.”

Heavy sea currents and waves had pulled the kids way out into the ocean — now they were helpless.

But Roberta couldn’t just stand and watch her children drown, so she and the rest of her family tried their best to swim out to them.

However, the currents were much stronger than they expected, and soon the whole family were taken deep into the riptide.

All in all, there were now 9 people in danger, including Robert’s mother, who suffered a major heart attack during the desperate struggle to survive.

Sadly, there were no lifeguards on duty that day. The policemen who were at the beach could only watch when the bathers were fighting for their lives, The Washington Post writes.

Jessica saw everything from the beach and said to herself: “These people are not drowning today, It’s not happening. We’re going to get them out,” The Washington Post reports

Jessica, who has always been a good swimmer, couldn’t just stand to the side

She took a surfboard and headed out into the ocean.

Others on the beach saw her rushing into the water and decided to help — soon they got the great idea of forming a human chain, which would be long enough to save the endangered family.

More than 80 people got up and stood in a line in the vicious ocean. Hand in hand, they held onto each other and made sure no one was taken away by the current.

Many were standing with the water reaching their necks and eventually the end of the chain reached Roberta, her boys and the rest of her family.

But when Jessica, who was at the beginning of the chain, saw the grandmother in the family, she knew something wasn’t right.

She had swallowed a lot of water and was completely exhausted. She asked Jessica to rescue the others and leave her to die. But Jessica refused to do that — she was determined to save everyone in the water.

The old woman, who suffered  a heartattack in the stressful situation, eventually managed to get to safety and back onto the beach.

Luckily, ambulance staff had arrived at the scene already and immediately took care of her. At the hospital, the grandmother’s condition was stabilized.

When everyone in the water had been rescued, the human chain was gradually broken.

On the beach, a large crowd had gathered who applauded the people who had dared to go out into the water to save the family.

Thanks to their courage they managed to save a good amount of people from drowning. An overwhelming wave of feelings, joy and euphoria spread all over the beach.

This is humanity at its best!

Roberta Ursey and her family will forever be grateful to Jessica and all other volunteers. If no one had reacted and come to their help, the family would most likely have died that day.

Fortunately, Jessica and the others showed a solidarity which will be remembered forever.

Please share this story if it also gives you hope about humanity!