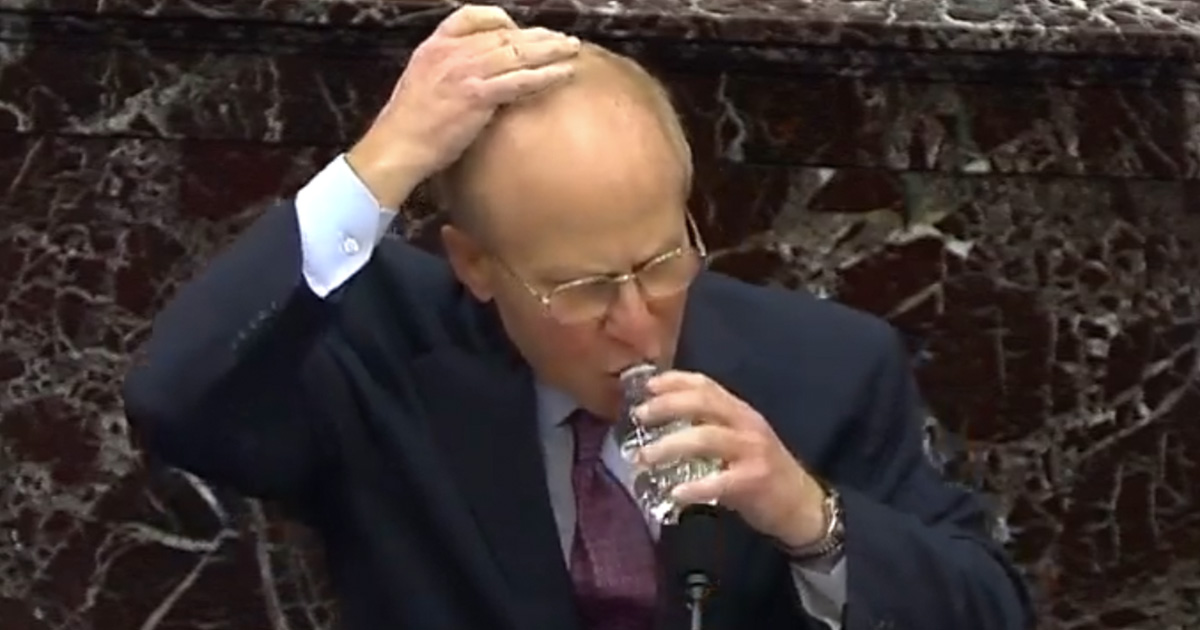 Donald Trump’s lawyer David Schoen was seen covering his head every time he took a sip of water during the first day of the impeachment trial. Was it just for fun? No, actually Schoen has a very specific reason for it.

Donald Trump’s historic second impeachment trial – with Trump being impeached over his role in inciting a violent mob that took over the U.S. Capitol on January 6 – has opened. But the first day didn’t turn out the way Trump wanted, leaving him “furious” and “beyond angry” with his defense team, according to Fox sources.

A majority of senators – 56-44 in favor – voted that it is constitutional to proceed with Donald Trump’s impeachment trial, with six Republicans joining Democrats as well as two independents on the vote.

A two-thirds vote of 67 senators is required for a conviction of Donald Trump. Bear in mind, however, that banning the former president from further office would require a second vote by the Senate.

Donald Trump’s defense team was assembled just over a week ago, with lawyer Bruce Castor alongside attorney David Schoen doing their part on the Senate floor.

During the first day of the impeachment trial Tuesday, Castor delivered a lengthy speech, stating that the reason for Trump’s impeachment trial is to prevent the former president from running for office again.

Further, he defended Trump’s remarks before the Capitol riot.

“We can’t be possibly suggesting we punish people for political speech in this country and that people go and commit lawless acts as a result of their beliefs, and they cross the line. They should be locked up,” Castor said.

Attorney David Schoen argued that the impeachment trial against the former president is unconstitutional, saying democrats are being fueled by “base hatred” of Trump.

Also, Schoen claimed that the Democrats “are seeking to eliminate Donald Trump from the American political scene.”

“This trial will tear this country apart, perhaps like we’ve only seen once before in our history,” Schoen said, as quoted to the Huffington Post, apparently referring to the Civil War. “It is wrong, as wrong can be for all of us as a nation.”

During the impeachment trial, attorney David Schoen also became quite a talked-about subject on social media. But not because of what he actually said, but instead about the way he was drinking his water.

Each time he took a sip of water while speaking at the Senate floor, Schoen rested his hand on top of his head. Several people on social media noticed the attorney’s rather unusual drinking habit, but there is actually a very simple answer to why.

Rabbi Menchem Genack, CEO of the kosher division of the Orthoox Union, told the New York Post that Schoen is an observant Jew. Therefore, he must cover his head and say a blessing whenever he drinks or eats.

“Each time we eat or drink something we say a blessing to thank God and we cover our head, typically with a yarmulke, to show respect and to acknowledge that there’s someone above us,” Genack told the New York Post.

“Since he wasn’t wearing a yarmulke he wanted to at least cover his head with his hand.”

The impeachment trial against Donald Trump is scheduled to continue on Wednesday at noon.

David Schoen is a man of strong faith, respect! Share this article if you’re going to be watching the progress of Trump’s trial with interest.