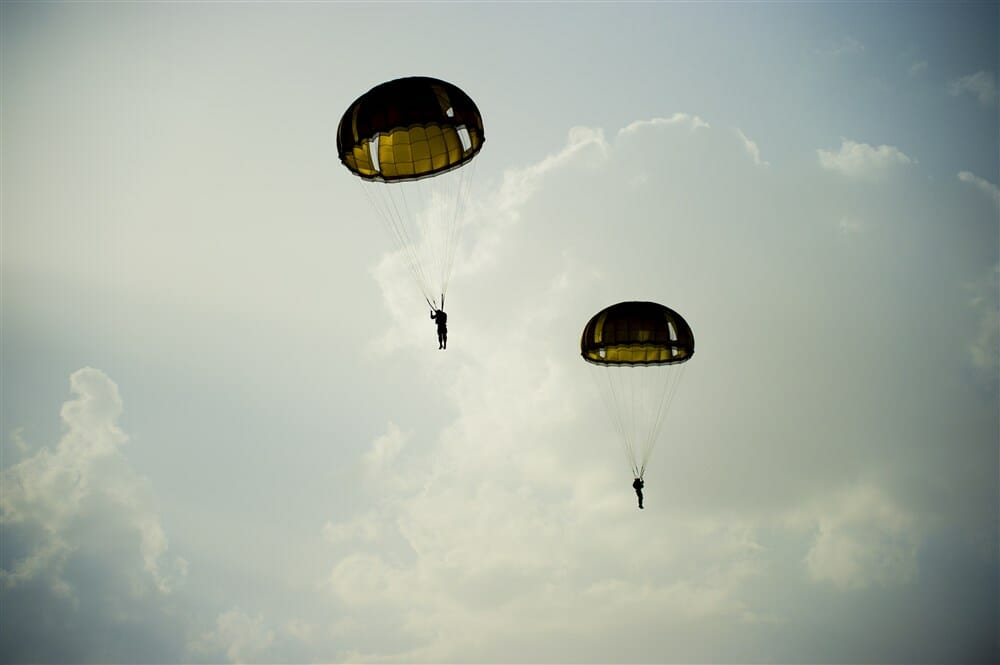 D-Day is celebrated in remembrance of all the brave soldiers who fought on the beaches of Normandy, France on June 6, 1944.

More than 150,000 soldiers – mainly Americans, British, and Canadians – participated in one of the largest military operations ever.

Today there are less than 500,000 surviving WWII veterans of the 16 million who served. One man who fought during WWII is Tom Rice.

On Wednesday, the D-Day veteran once again jumped in Normandy to pay tribute to the 75th anniversary of the invasion.

Tom Rice, who served with the US Army’s 101st Airborne Division, was one of thousands of paratroopers who landed on French soil during D-Day.

Speaking with reporters, he called the 1944 jump “the worst jump I ever had.”

“I got my left armpit caught in the lower left-hand corner of the door so I swung out, came back and hit the side of the aircraft, swung out again and came back, and I just tried to straighten my arm out and I got free,” he told The Associated Press.

He landed in the middle of the night, behind enemy lines, and it was pitch black when he looked around.

Fortunately, the conditions were much better 75 years later.

Rice jumped in tandem with another parachuter and this time the experience was much better than 75 years ago.

“It went perfect, perfect jump. I feel great. I’d go up and do it all again,” Rice told reporters after the commemorative parachute jump.

The 97-year-old war veteran, from San Diego, had been preparing for his jump the past six months, with assistance from a coach.

The parachute jump for the 75th anniversary took place in the area around Carentan, a rural French port city.

Carentan was an important strategic position and was one of the targets when US paratroopers landed in the occupied France, back in 1944.

Rice brought with him an American flag during the jump, which he held under him.

Thousands of spectators gathered along the Normandy coast to witness the spectacle in the sky, which was once again filled with a cloud of parachutes.

“Woo-hoo!” the ex-paratrooper shouted after hitting the ground.

After landing, Rice was asked how his D-Day comrades would have felt about him recreating their courageous jump.

"It went perfect, perfect jump," 97-year-old D-Day veteran Tom Rice said after his jump. "I feel great. I'd go up and do it all again." #ProudAmerican

“They would love it. Some of them couldn’t handle it. Many of them are deceased. We had 38% casualties,” Rice said.

Sadly, there are not many veterans left from his generation, so Rice says he represents them all one a day like this.

Few veterans went unharmed from the World War II, and Rice is no different. He has memories of the war that are hard to forget.

“All the GIs suffer from same blame and shame,” Rice said.

“It bothers us all the time for what we did. We did a lot of destruction, damage. And we chased the Germans out, and coming back here is a matter of closure. You can close the issue now,” he said.

And you wonder why we call them The Greatest Generation…

Thank you for your service and inspiration sir!????

That was wonderful to see the picture of your recent jump into Normandy.