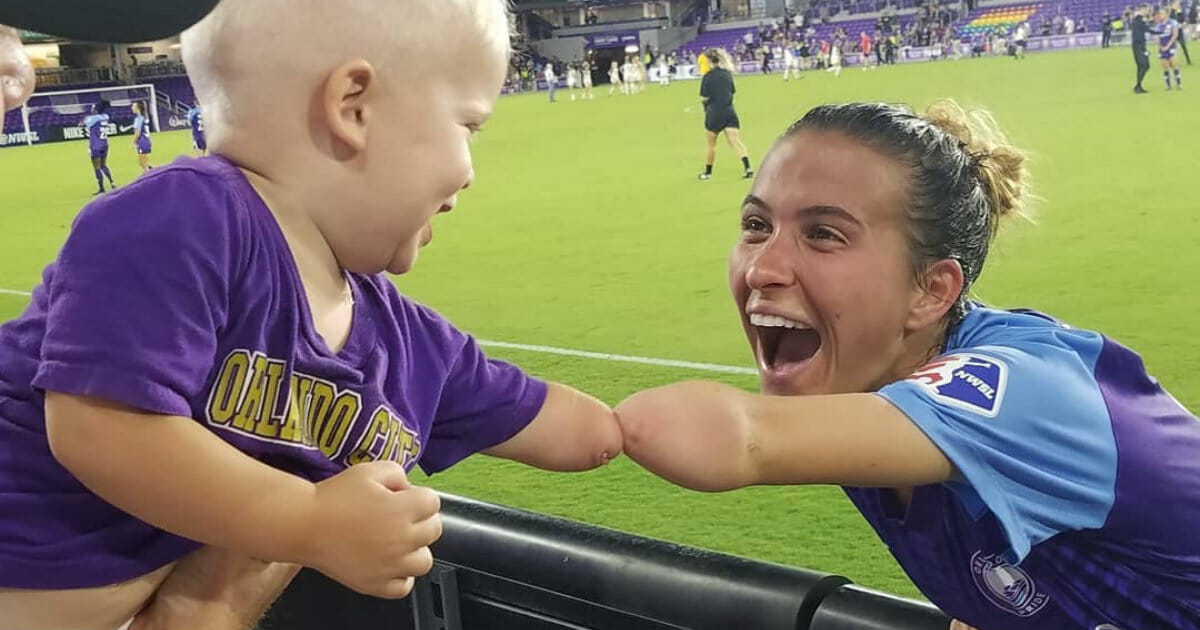 While it’s always great to celebrate the differences that make us unique and special, sometimes it’s nice to find someone just like us to know we’re not alone.

That’s the story of this inspiring viral photo that’s warming hearts all over the internet—a photo of a little boy finding a new hero in a kindred spirit.

Joseph Tidd is a 22-month-old from Florida who was born, who was born with a partially-formed left arm. His parents, Miles & Colleen Tidd, work hard to make sure their son grows up with pride and confidence in himself despite his differences.

That includes making sure he knows he’s not alone, and that there are others just like him.

In June, the family attended an Orlando Pride soccer game. They were especially excited to see one player in particular: Carson Pickett, who, like Joseph, was born without a left forearm and hand.

“Carson believes she can do anything, and that is the mindset we want Joseph to have as well,” Miles told Today.

Despite my face, I don’t mind a bit of purple ? It’s good to be back, NWSL and @orlpride

Carson watched the game dressed in his purple Orlando Pride shirt. But it was a moment after the game that really made a difference—and captured people’s hearts.

After the game, Carson Pickett came up to the family in the stands, and “fist bumped” an ecstatic Joseph:

Staying up late this weekend was worth it when you get to cheer on @carson.pickett ! ⚽️ I love fist bumping her.? If you can't tell she makes me smile, double chin and all! . . . Swipe ➡️ to see how big my smile gets after I fist bumped her. I couldn't stop giggling! ? Carson is such a great role model. . . . #orlandopride #nwsl #biggerthansoccer #filledwithpride #luckyfinfamily #luckyfinproject #limbdifferenceawareness #16 #orlando #fistbump #doublechin #giggling #smile #grateful #stayinguplate #toddler #cheerleader #tenfingersareoverrated #orlandocity #orlandocitysoccer #rolemodel #soccer #unstoppable

Colleen Tidd rushed to grab her camera to capture the precious moment.

“In those situations, I want to be in the moment,” Colleen told the Washington Post. “But then I realized, ‘Well, this is adorable.’”

Indeed, the photo has been liked nearly 7,000 times on Instagram and has been widely shared online.

“I couldn’t stop giggling!” Colleen wrote on Instagram. “Carson is such a great role model.

While that moment has them going viral, it wasn’t actually their first meeting. The Tidds were introduced to the soccer player back in April during the Pride’s home opener. Colleen and Joseph spent a half hour bonding after the game.

“It took a minute for him to realize, ‘Wow, we’ve got the same arms,’ and then he just giggled,” Colleen told the Post. “You could see it hit him, and then they were best friends after that.”

SWEETEST REACTION ???? . . I wanted to share this quick clip from our meeting with Carson the other day. For anyone who has asked “do they really know their different”, just watch this video. . . You can see the moment that Joseph pauses, the look on his face changes…he is thinking hard as he’s studying Carson’s arm. Then the joy that washes over him as he realizes “she’s just like me”. The smile and giggle followed by the unprompted desire to show his arm to Carson. . . This was the moment I love to see when those with a lucky fin connect. We have been lucky enough to see this several times at our lucky fin meet ups with other kids and adults. If you haven’t had a chance to attend a local meet up, go check out the Facebook page for your local chapter for more info. We will be at the Central Florida meet up for those in the Orlando area. . . Here are some pictures from the local news story with Carson on Tuesday. The link to the interview with Joseph and Carson is in our Bio. We even bumped into Bo Outlaw which made for an awesome picture with little Joseph. . . #luckyfinfamily #orlandopride #orlandomagic #booutlaw #tenfingersareoverrated #fox35 #fox35orlando #localnews #locals #heros #mentors #happiness #purehappiness #understand #bond #preciousmoments #heknows #coolarm #joy #giggles #newfriends #centralflorida #proud #limbdifferenceawareness #limbdifferenceawarenessmonth #biggerthansoccer #biggerthanbasketball

Joseph’s parents even became friends with Carson’s parents, bonding over their shared experiences.

“For us this is great because we get to ask those tough questions about how to deal with bullies,” Miles told Today.

And Carson loves any opportunity to be an inspiration to someone.

“I have the ability to impact a lot of people,” she told The Guardian last year. “My parents tell me all the time to use the platform God gave me. I can use my arm for something greater than myself. I’m able to impact so many kids and people who may not see a way out. It doesn’t have to impact them through soccer. To see that I am succeeding in life and happy in life can go a long way for some people.”

We were blessed to be able to spend the day watching our @orlpride. ⚽️ We finally were able to get our @carson.pickett #16 jerseys at the stadium. Have to represent our favorite team and favorite girl. . . . We were able to give players high fives coming out of the tunnel as part of the @ockingston club for the kids. Thanks to @bridget_callahan @alexmorgan13 @shelinaz for the high fives. Sorry to @alannakennedy for leaving you hanging, it's just hard to compete with our the awesome @carson.pickett Ha ha ? . . . Big sister Addison was yelling "Go Carson!!!" the whole game, and Joseph was trying his best to yell it too. If you listen carefully you can hear him yelling "Go Carson". . . . What better place to make new friends then at an @orlpride game. Joseph and this little guy became fast friends. #biggerthansoccer #orlandokids #orlandopride #kingston #orlandocity #ocsc #vamosorlando #blackswans #futureispurple #faceofloyalty #gocity #filledwithpride #bestfriends #dontleavemehanging #highfive #familytime #luckyfinfamily #supportyourgirl #saturdaynight #thingstodoorlando #girlpower #carsonpickett #sharethelove #limbdifferenceawareness #limbdifferenceawarenessmonth

While Joseph isn’t two yet, his parents believe he can follow in Carson’s example by becoming an athelete.

“Football, basketball, baseball, soccer, he does it all,” Colleen told Today. “He maneuvers his arm a little bit differently, but he makes it work.”

Not only that, the toddler already has a sense of humor about his arm.

“Joseph has been telling other kids he bit his arm off,” Colleen said. “He’s just created his own little story and he’s going with it!”

Clearly having so much encouragement from his role models is inspiring a great deal of confidence.

“It’s just showing that he might be unique, but he’s no different than anyone else,” Colleen told the Post. “He’s going to be able to accomplish it all.”