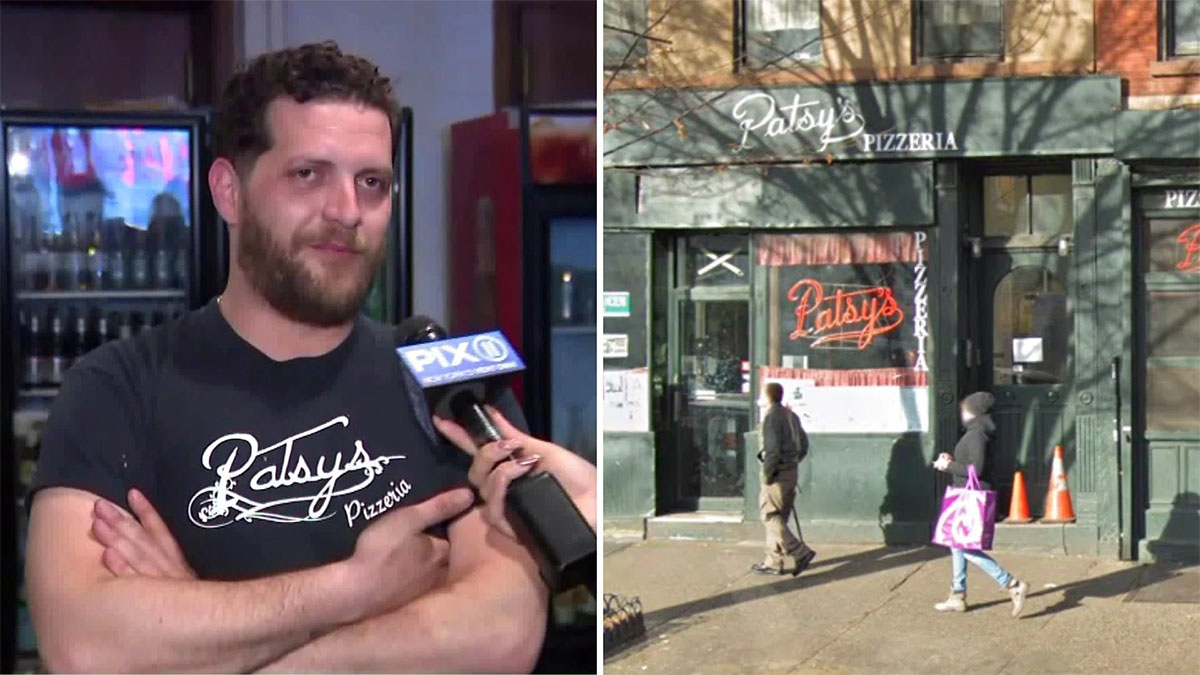 The job of a server is hard enough but when you’re working in the one of the busiest and most expensive cities in the world it can be a tough job to do with a smile on your face every day, especially when dealing with difficult customers.

Armando Markaj works as a server in the famous New York City pizzeria “Patsy’s” and relies on tips from customers to help him get by.

He’s served at the famous First Avenue restaurant for 9 years while working toward becoming a doctor.

But when Karen Vinacour came in to eat with her daughter one afternoon Markaj had no idea what he was in for.

Karen was aware that she was eating in a very special restaurant, she told ABC 7 News.

Patsy’s Pizzeria has been around for over 80 years and is thought to be the first New York eatery to sell pizza by the slice.

She was looking at the walls adorned with pictures of all the famous people who had eaten there and asked Markaj why there weren’t any women included.

“We were talking and chatting away, and then there was this little exchange with the waiter about no women on the wall,” Karen said.

Markaj didn’t know the answer so brushed it off with a light-hearted response.

He told Karen: “There’s a bunch of women, and she goes ‘not as much as there should be.’ Well, summer is coming, probably women don’t like to eat pizza as much. You know, sense of humor.”

Owner Frank Brija, who bought the restaurant in East Harlem from the original owners in 1991 and expanded to many more locations across the city, said there were plenty of pictures of women on the wall.

“We have Barbara Walters, Christine Quinn, we have the First Lady,” Frank said.

But Karen wasn’t happy with the response she was given and decided not to leave her server a tip.

Thousands of servers in New York rely on tips to get paid the minimum wage requirement.

But Karen wrote on her bill “Maybe women don’t tip either,” as per Simbaly.com.

As the 27-year-old was clearing the table she spotted an envelope with a cashier’s check inside that Karen had left behind.

Armando and Frank waited a couple of days but no one came back for the check so turned to the media to help track Karen down so the money could be returned to its rightful owner.

Thankfully the media appeal helped and Karen returned to the restaurant to collect her check.

“I’m glad we had it here for you. It would have been dramatic for a lot of people. She was in tears. She was super excited that someone had found it and kept it,” Armando adds.

Karen was so overjoyed she offered Armando money as a reward for working so hard to find her but he refused to take it.

“I’m so grateful that the insult that we gave him did not prevent him from doing the right thing,” Karen said.

Instead Karen plans to reward Armando with a gift certificate toward educational supplies.

“Small details like this define us as humans – it’s just a small gesture,” Armando added.

Karen is lucky that she was served by such an honest and hardworking person as Armando, he is a credit to the restaurant and I hope he achieves his dream of becoming a doctor one day, he deserves to.

We should all be kinder to the people who serve us every day, working so hard just to make the minimum wage. Please share if you agree.