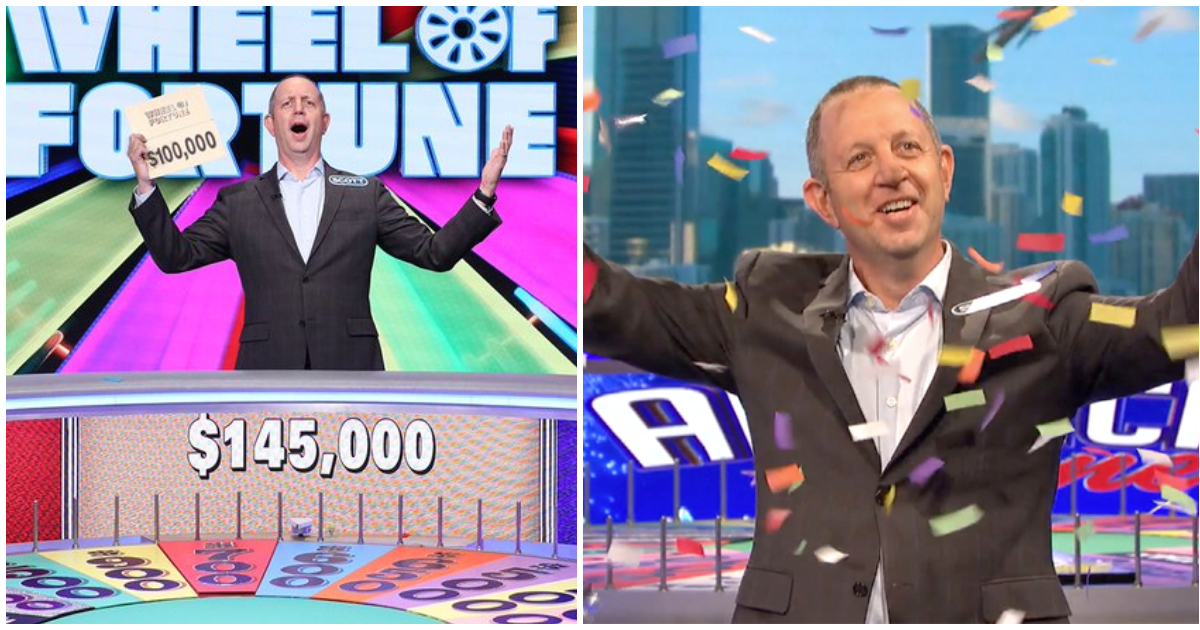 For decades Wheel of Fortune has been a game show favorite. Viewers around the world play along at home every day, dreaming of making it to the final round and winning the grand prize.

But what would you do if you won big money on Wheel of Fortune? Well, the big winner on one recent episode decided to be very generous with his prize money — giving it all to charity!

Scott Kolbrenner, from California, was a contestant on the March 18th episode. He made it to the final round, and had to guess the clue under the category “What Are You Wearing?”

With a few letters on the board, Scott didn’t hesitate to give the correct answer: “Flowing white gown.”

And then, confetti poured down as host Pat Sajak revealed that Scott had won the grand prize: $100,000!

That added to his winnings, bringing his total to $145,000, making him the fifth biggest-winning single game contestant in Wheel of Fortune history.

That’s a huge win, and would be life-changing money for most people. But Scott stunned Wheel fans by announcing he was going to give it all away.

In an incredibly generous gesture, Scott pledged to donate all of his winnings to Uplift Family Services and the Los Angeles Regional Food Bank.

For Scott, a lifelong Wheel of Fortune fan, it was a dream come true to be on the show, but he said that if he won he would use his winnings to give back, helping those less fortunate in this “dark time.”

“When I went on the show, I was doing it for the fun of it, and I said to my wife, ‘If I do OK here, anything that I get, let’s give it to charity. We’re very fortunate. Let’s see if we can support some others who aren’t as fortunate as we are,” Scott told Good Morning America.

The donation will certainly go a long way in helping people in need, especially those hit badly by the COVID-19 pandemic. The two charities issued statements thanking Scott for his generosity.

“It takes the whole community to fight food insecurity and the critical work that we do is possible with the help of people like Scott Kolbrenner,” Los Angeles Regional Food Bank wrote. “We are so grateful to be part of such a supportive community.”

“We are so honored and grateful that Scott chose to play for us while advocating for our agency’s Los Angeles-based Hollygrove programs!” Uplift Family Services wrote.

This isn’t the first time Wheel of Fortune has helped food banks during this crisis. Last summer, the show ran a promotion where viewers could win a $1,000 prize to viewers, and also win $1,000 for their local food bank.

What a generous thing to do. Congrats to Scott on an amazing win, and thank you for donating your winnings to these worthy charities!