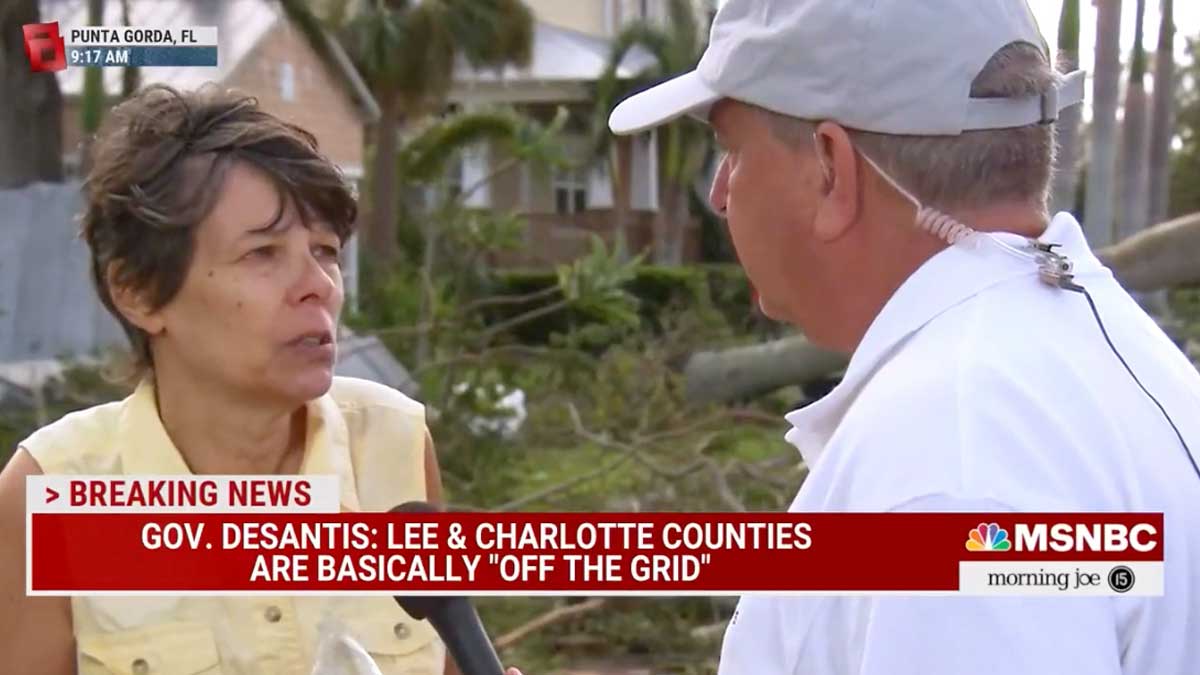 Cleanup as well as search and rescue efforts are well underway after Hurricane Ian battered the Florida peninsula Wednesday and Thursday.

During the height of the storm and in the immediate hours following it, we began to see the horrific damage it left behind. Now we are beginning to hear the stories of those who survived.

Renee Smith, who lives with her husband in Punta Gorda, Florida, explained to NBC News‘ Kerry Sanders how she ensured her paralyzed husband’s safety before taking cover.

The Florida couple, who live approximately 24 miles north of Fort Myers where most of the destruction occurred, recently returned home from the hospital.

Renee’s husband Christopher had become paralyzed from the chest down after his prostate cancer metastasized to his spine.

He was due to begin radiation on Wednesday, but his treatment was cancelled due to the impending storm.

Renee was faced with a difficult situation: how to keep both of them safe from a category 4 hurricane.

“It was terrifying,” she said.

But with a little ingenuity, Renee was able to find a way to give Christopher, who was in a hospital bed, the best chance at survival.

I took some blankets and I put some holes in them with scissors and I zip-tied them to the hospital bed and then I took a big tarpaulin that had grommets and I zip-tied that over it; and then I put pillows and plastic bags and I duct-taped them to the top of the sideboard and I put pillows between the sideboard and the window because I didn’t want him to get cut up to death if the window blew in, and then I put a life jacket on him so that if the water came in he wouldn’t drown, he would float.

Once she determined he was a safe as could be, she built herself a fort using blankets, pillows, and their kitchen table.

Renee stayed under the table throughout the duration of the storm. She didn’t dare look outside.

“You could hear the chimney getting ripped off the roof,” she said. “I was afraid it was going to come in through the roof and crush me even though I was under the table.”

Even though she lived through previous hurricanes, like Charley in 2004, Renee described Ian as “awful and long-lasting.”

There was nothing she could do but hide and wait for the storm to pass.

Thankfully, both survived Hurricane Ian. Renee escaped with a broken arm and said Christopher is “traumatized” but alive.

If there’s one thing Renee could have done differently it would have been to stay with her husband during the storm. She admitted she felt guilty and called herself a “coward” for not keeping him company during one of the strongest hurricanes to hit Florida.

Renee is an extremely strong and brave woman. I cannot even imagine going through what she experienced. I pray that she and her husband will get the physical and mental help they both need.

Please join me in saying a prayer for this couple.