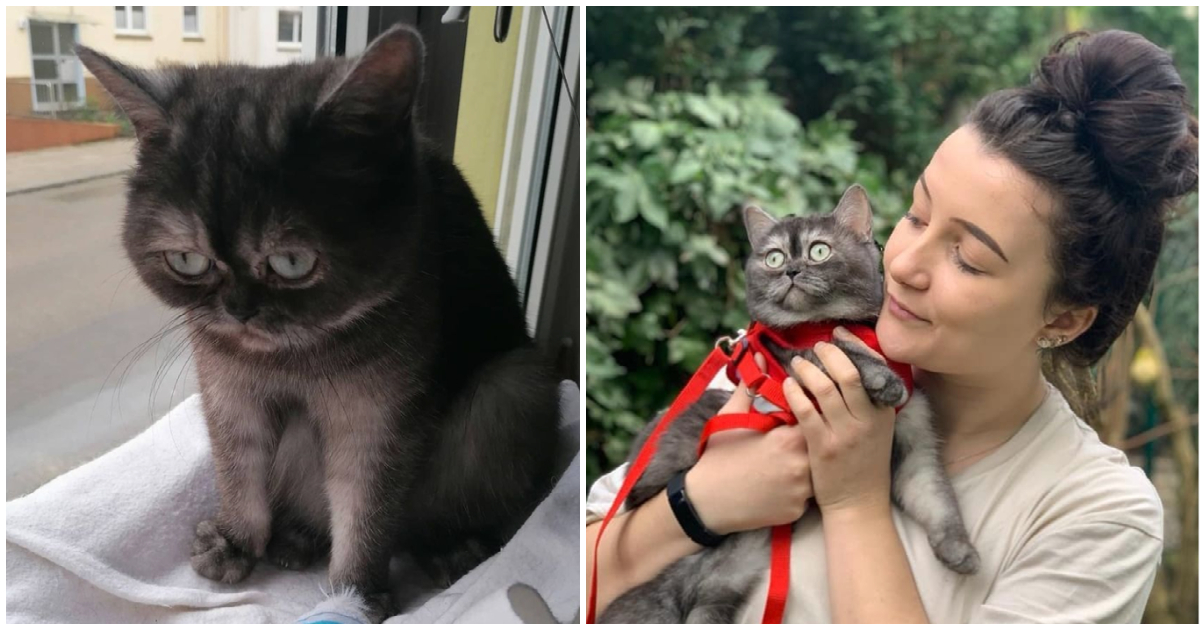 There are many cats with “grumpy” faces, and we can’t help but love them. They might not be the most conventionally cute or cuddly cats, but they do reflect the sort of can’t-deal-with this mood we all feel from time to time, and many of these cats have become internet icons (most notably the late great Grumpy Cat.)

So it’s hard to believe that one of these “grumpy” kittens would be so unloved and passed over at the shelter. That was the case for one poor kitty, until she found the perfect owner who would love her just the way she is.

Francisca Franken is a big cat lover, and was eager to adopt after moving to her own apartment:  “I moved into a bigger flat so I could have a cat again,” she told Bored Panda.

It didn’t take long for her to find a cat who quickly won her over: an exotic shorthair rescue named Bean.

Bean definitely had a distinct look, and was described as “feisty.” Francisca was immediately smitten.

“I saw her photo and fell in love the second I saw her. Well, at first I laughed because the pictures were so funny and I’d never seen a cat like this before.”

But when she contacted the shelter, she got an unexpected response: they seemed to not understand why she would want Bean.

“The lovely lady asked me if THAT really was the cat I wanted to apply for, because nobody had ever been interested in her,” she wrote on Instagram. “I teared up at the thought that no one wanted her.”

The woman was so perplexed that she actually thought Francesca pushed the wrong button. Apparently nobody had ever expressed interest in Bean, even though she had been available for a month.

Bean had been rescued from a neglectful living situation in a trailer home and had some medical issues, but it seemed she was just being written off because of the way she looks.

“A lot of people who saw her at the shelter said she was ugly,” Francesca told The Dodo. “But I think she’s the most perfect girl ever.”

More determined than ever to give Bean a good home, Francesca made an appointment with the shelter, and met the cat in person.

And while so many people ignored the cat based on her looks, she fell even more in love up-close.

“What I saw was much more beautiful than I could ever imagine,” Francesca told Bored Panda. “Bean was (and still is) so tiny and small, she has very stubby legs and a short tail. And the cutest face I had ever seen.”

“I started crying when I walked into her room because I was so overwhelmed. She was not at all what I had imagined but it was so much better than that.”

After just one meeting, she took Bean home.

Understandably given her unpleasant background, it took some time for Bean to trust her new owner and feel at home.

The cat was overly attached at first, as if fearful that she would get sent back to the shelter if she wasn’t affectionate enough.

“In the beginning, she was much more cuddly and clung to me everywhere I went,” Francesca told The Dodo.

But soon, Bean warmed up to Francesca and let her true self shine.

“I think she then noticed that she didn’t need to ‘pretend’ like that and that I would never let her go again, even if she stopped being cuddly and cute, so she started to show me her sassy side. But I loved that because she let her true colors shine through.”

Like Francesca, people are smitten with this one-of-a-kind cat. Her photos show how this goofy and sassy cat has let her personality shine in her new loving home.

One of Bean’s many quirks: a passionate love for olives.

“She loves them so much that she broke into the fridge, gobbled down two or three of them and got off at lightning speed when I tried to stop her,” Francesca wrote on Instagram.

“I was able to catch the thief and she used all her power to free herself and the last remaining olive.”

Francesca gave Bean the home she might not have ever had, and it’s a decision she’s so glad she made.

“Taking her in was the best thing to happen to me,” she told Bored Panda. “I think it was meant to be, because nobody but me was interested in this beautiful cat… I’ve had cats the majority of my life, but she’s quite special.”

“Bean is not a real emotional support animal but she’s definitely gotten me through tough times already, and I can’t put into words how much I love her,” she told The Dodo. “She means the world to me and she deserves all the love after having such a rough time before coming to me.”