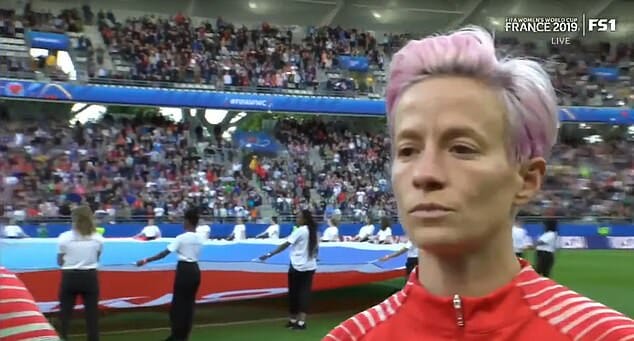 The United States women’s national soccer team has gotten off to a fantastic start in the 2019 FIFA Women’s World Cup with two straight wins.

But as the team fights to defend their World Cup title, the focus has been on one of the biggest stars on the squad.

Unlike the rest of her teammates, co-captain Megan Rapinoe is not participating in the national anthem.

Since 2016, Megan Rapinoe has not taken part in the national anthem, and this World Cup is no different.

Ahead of the opening game against Thailand last Tuesday, Rapinoe stuck to her resolve not to sing the “Star-Spangled Banner.”

While her teammates held their hands over their hearts and sang along, Rapinoe stood silent, stone-faced, and with her hands at her side.

The 33-year-old co-captain did the same thing prior to the team’s 3-0 win over Chile on Sunday.

It all started in 2016, when Rapinoe made headlines for kneeling during the national anthem prior to a game against Thailand.

She explained her decision in The Players’ Tribune.

“I haven’t experienced over-policing, racial profiling, police brutality or the sight of a family member’s body lying dead in the street,” she wrote.

“But I cannot stand idly by while there are people in this country who have had to deal with that kind of heartache.

“I have chosen to demonstrate in this way.”

“There is no perfect way to protest. I know that nothing I do will take away the pain of those families. But I feel in my heart it is right to continue to kneel during the national anthem, and I will do whatever I can to be part of the solution.”

“I can understand if you think that I’m disrespecting the flag by kneeling, but it is because of my utmost respect for the flag and the promise it represents that I have chosen to demonstrate in this way,” she wrote.

“When I take a knee, I am facing the flag with my full body, staring straight into the heart of our country’s ultimate symbol of freedom — because I believe it is my responsibility, just as it is yours, to ensure that freedom is afforded to everyone in this country.”

Before this year’s World Cup kicked off in France, Rapinoe spoke with Yahoo Sports and declared that she would probably never sing or honor the national anthem again.

She also said that this was her statement against President Trump.

“It’s kind of a good ‘F you’ to any sort of inequality or bad sentiments that the [Trump] administration might have towards people who don’t look exactly like him,'” the soccer star said in the interview.

Rapinoe explained that she’s not going to accept the customary invite to the White House from President Donald Trump if the US Women’s Soccer Team wins the World Cup.

Criticized and praised on social media

It’s no surprise that Rapinoe’s activism has been criticized on social media.

“So that Megan Rapinoe lady wants to pull a Colin Kaepernik? That’s it for Team USA in the World Cup for me. No time for that BS,” one person wrote on Twitter, according to Daily Mail.

“Megan Rapinoe is anti-American. Get out of this country you’re not wanted. You are a disgraceful, disrespectful human being,” another user wrote. 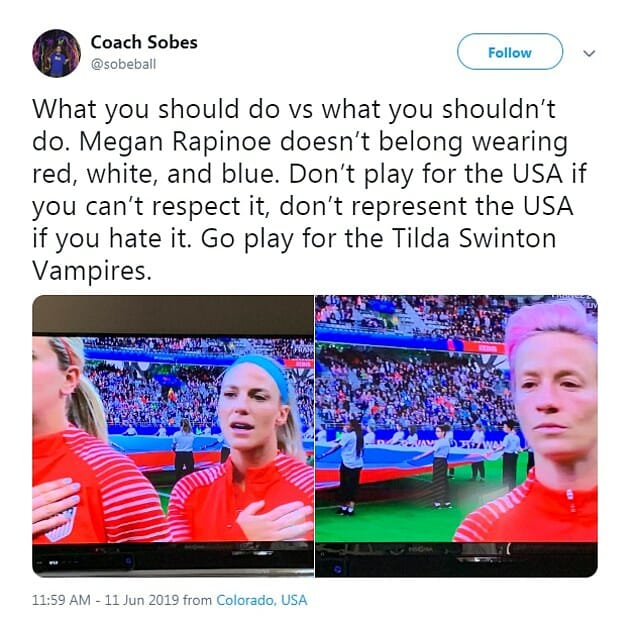 Rapione has also been praised.

“Megan Rapinoe is not singing the anthem (because she’s not allowed to kneel) and I love her so much it hurts,” one person tweeted.

”I love her reasoning. She will forever be one of my favorite athletes. The First Amendment gives her the right to peacefully protest”, another one said.

What do you think about her decision?

What do you think about Rapinoe’s decision to remain silent during the playing of the national anthem?