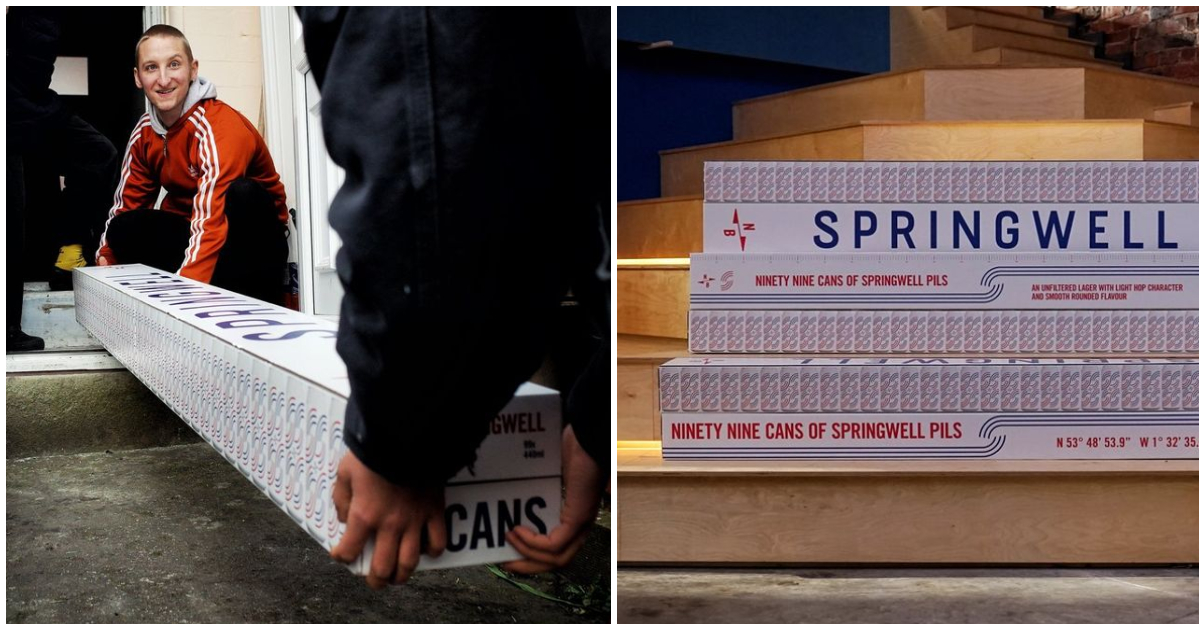 We’ve all been in this dilemma: you wanna stock up on beer for the weekend, but the store only sells it in 6- and 12-packs. That’s not nearly enough.

No, for the serious beer drinker, there’s only one product that will do the trick: a whopping 99 cans of beer, all in one pack.

North Brewing Company, in the UK, are the madlads behind this crazy-but-real pack of their Springwell Pils.

Behold its glory, and wonder how you’d fit it in your fridge:

The case is being sold in honor of the opening of the company’s new brewery in Leeds. It’s a COVID-friendly way to celebrate.

“Whenever we open a new bar or venue, we have a big party but we’ve not been able to have anyone in the venue yet and we still wanted to do something to celebrate,” said brewery manager Sarah Hardy, according to LADbible.

“It had to be something fun and playful, so we came up with the idea of the 99 can boxes to launch the new Springwell beer, named after the brewery itself.”

The brewery is aiming the product at locals, hoping the extra-large pack will tide them over for the rest of quarantine until they can reopen.

“Close your eyes and imagine for a second: you’re here with us at our new home, Springwell,” their description reads. “You’re outside with your friends, music is playing, the sun is shining, you’re drinking Springwell Pils fresh from the tank.”

“A picture soon to be a reality, but for now, we’re staying safe and drinking at home. Crisp, light and rounded. Springwell Pils is an unfiltered lager lightly hopped with Callista and MittelFruh.”

Unfortunately for the rest of us, it’s only available to locals. But if you’re in Leeds, the brewery will deliver the case right to your door for £199 (that’s about $276 USD.)

“At first, we were wondering whether we could deliver them in a Covid-secure way but the length of the box actually measures your distance which is perfect,” Sarah Hardy said.

“Luckily they just fit in the brewery’s van and they need two people to lift each box because they’re hefty things.”

The brewery says its the biggest pack of beer ever available in the UK, although across the pond Pabst beat them to it, selling an equally-massive crate of PBR.

And while there doesn’t seem to be an official world record, the biggest case we could find was this apparently-real “Freedom Pack” offered by Declaration Brewing Company which boasted a whopping 420 beers.

Which might just be enough to get us through the week.

Share this story with someone who would buy a 99 pack of beer.