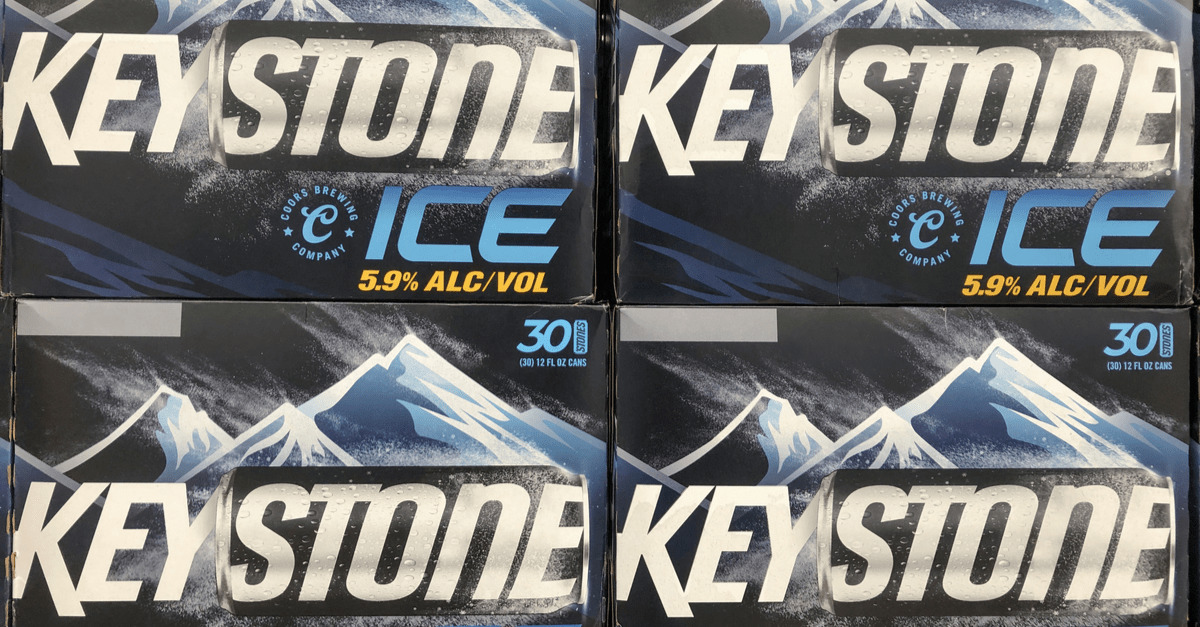 Look, we can act like beer snobs all we want, talking about the finest small-batch craft IPAs from the hip local breweries, but deep down we all know that some of our best memories in life were thanks to cheap cases of beer we picked up at the supermarket.

We’ve all gone through a phase, right around when you first turn 21, where money is tight but beer is still king, so weekend plans mostly involve chugging cans of the cheap stuff from a 30-pack.

For many a once-broke college student, that beer was Keystone Ice.

Was Keystone Ice a good beer? That largely depends on your personal taste, but it does have a score of 45 on Beer Advocate, aka “Awful.”

But that’s not the point. As an ice beer, Keystone Ice offered solid alcohol content (5.9% ABV) for a low price, meaning you could get your whole frat party drunk for cheap.

Sadly, those days are no more. In what truly marks the end of an era, Molson Coors announced Wednesday that they would be discontinuing 11 of its “economy brands,” including Keystone Ice.

While some of these have a following of their own (although we have no idea what Hamm’s Special Light is). But it’s clear none made the impact on people’s lives like Keystone.

On Twitter, many Keystone Ice drinkers are reacting to the news, reckoning with the loss of a beer associated both with fun college nights and with hangovers and blackouts.

According to on Tap Sports Net, Molson Coors has axed the economy beers in favor of prioritizing other brands.

And maybe there just isn’t a world for Keystone Ice anymore. Go to today’s fraternity and sorority houses and you’ll find partiers sipping White Claws, while those who once played Beer Pong with a Keystone in hand have (hopefully) moved on to better things.

As such the response to the beer’s discontinuation has been less outrage and more quiet acceptance tinged with nostalgia.

“While I doubt there are many people out there who are truly devastated by any of these losses, coming across this news is sort of like hearing about the passing of an old high school friend you lost contact with after graduating,” writes BroBible in their eulogy to Keystone Ice. “It’s hard not to mourn them and regret not having one final chance to catch up for old times’ sake.”

“Losing Keystone Ice is like losing a family member who you love dearly but also who has tried to stab you on multiple occasions,” writes Kyle Bandujo.

But those who truly miss Keystone Ice will have to settle for that other old staple of college dorm parties: Natty Ice, still going strong.

Rest in peace, Keystone Ice. We’ll be pouring one out for you.

Share this story with your favorite (or least favorite) memories of Keystone Ice or any of the rest of these fallen cheap beers.