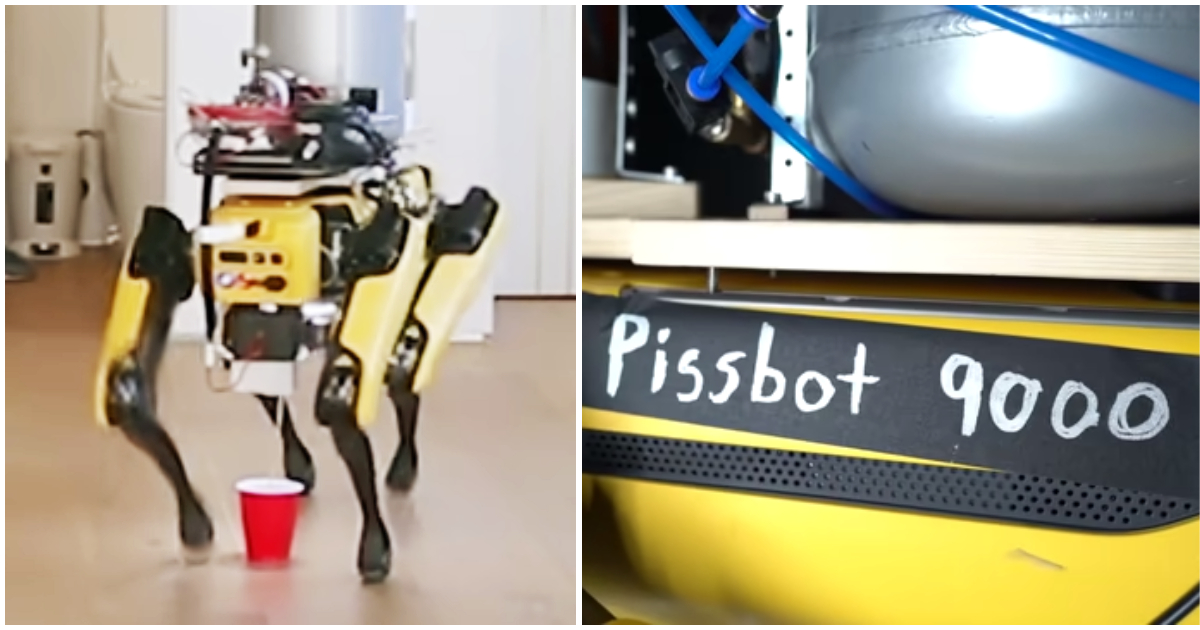 Modern times have seen no shortage of life-changing technological breakthroughs: the Internet, cell phones, etc. But all of that pales in comparison to the breakthrough in artificial intelligence that one YouTuber has brought into existence.

For decades, beer lovers have had scarce options for how their beer is served: either in bottle, can, or on tap.

But now, at last, you can have a beer pissed from a robot:

That’s right: the Pissbot 9000 is a highly advanced robot whose sole purpose, thanks to some clever programming, is to seek out red Solo cups and “pee” fresh cold beer into them.

“Pissbot” is actually a robot named Spot, a creation of Boston Dynamics. Spot is an agile, flexibly mobile robot that walks around on four legs. It can carry up to 14kg of equipment, is fully programmable and can sense objects, designed for automated industrial inspection.

(Beer lovers who follow our site might recognize Spot as the robot dog who was trained to serve beer at bars in Spain.)

YouTuber Michael Reeves was fascinated by the Spot and finally was able to get his hands on one (Spot is available for sale for just $75,000), and after playing around with its cool features, decided to do the dumbest thing possible with the tech: make it piss beer.

Partly to get revenge at Boston Dynamics for denying him access to a Spot but mostly because it’s a funny idea, Reeves got to work.

Across a 16-minute video, Reeves explains his programming process that I’m too dumb to fully follow, but essentially he builds a rig for the robot (the “penis,” as he eloquently puts it) attached to pressurized beer, and then programs Spot’s sensors to be able to identify the sight of red Solo cups.

After detecting one, Pissbot will walk over, position its robotic penis above the cup, and emit beer.

And amazingly, it works! Sort of!

In one scene, Pissbot fulfills his directive perfectly, heading over to a Solo cup and filling it with beer. However, it then starts to walk around, getting beer on the floor.

“Pissbot is working flawlessly. 35 percent of the time,” Reeves says.

Still, technology takes time to perfect, and this is one impressive first attempt. We’re sure with more research and development Pissbots will be the new iPhones, everyone will have them.

In a final act of petty revenge, Reeves ends the video by taking Pissbot to Boston Dynamics headquarters and having it pee beer in front of the building.

Is programming a robot to get revenge on its original creators something that will eventually trigger an apocalyptic robot uprising? Time will tell.

Either way, Pissbot is a hit. The video has gone viral with 7.3 million views on YouTube in just a few days.

We are truly in the future. Share this story with someone who would want a beer-pissing robot.