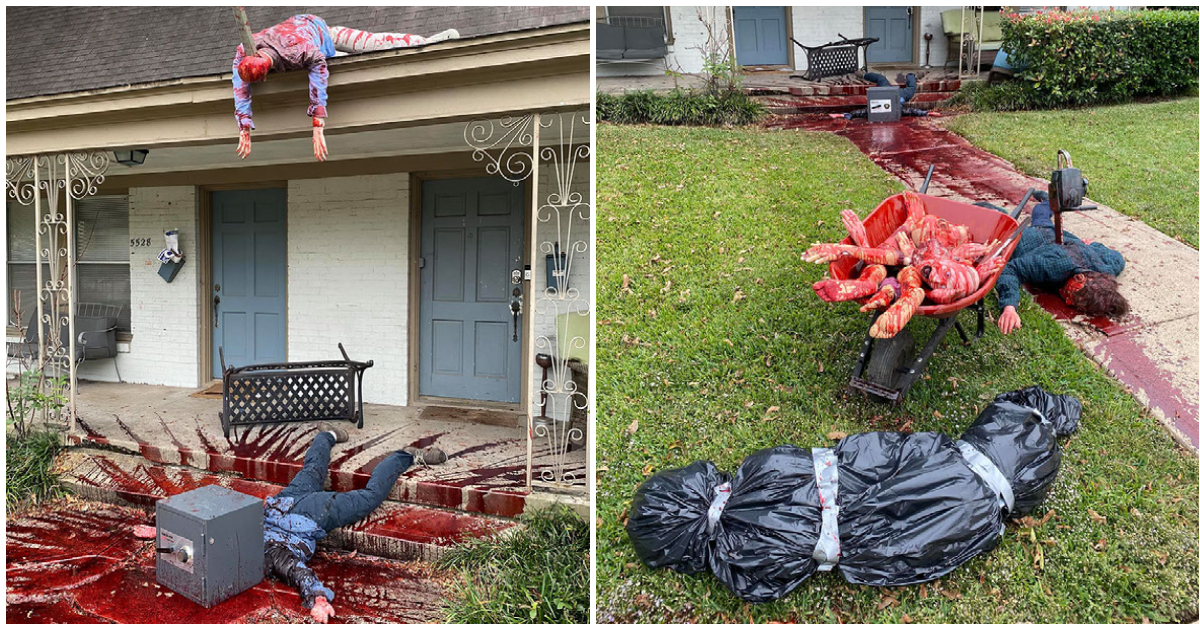 Halloween is this weekend, and people everywhere have been decorating their homes to stir up some spooky frights for trick-or-treaters.

But while most people go with more harmless scares like ghosts and skeletons, one man decided to take Halloween horror to the extreme—prompting some visits from the police, and a question of how far is too far when it comes to scaring the neighbors.

Steven Novak is an artist from East Dallas, Texas. He takes a lot of pride in his artistic creativity, so when October came around he knew he had challenge himself with his Halloween display.

“I’ve always been up to hijinks like flying ghosts or 7-foot tall snow sculptures of myself, so if I was gonna do Halloween, it was obvious that it should be hyperreal,” he told the Dallas Observer. “Something that would really freak people out walking by in the dark.”

“So I whipped up some dummies and slung 20 gallons of blood all over.”

(Caution: while the photos are fake Halloween displays, they depict realistically violent scenes that might upset some viewers)

Now, Novak’s lawn is a distinctly R-rated horror show, with gallons of fake blood pouring out of his dummy victims.

There’s an undeniable creativity to the whole project: the special effects are impressive, as are the methods of execution, so to speak.

One dummy has been crushed to death by a safe, others have been chopped up, their body parts carted away in a wheelbarrow, an idea that Novak is quite proud of.

“A kid walked by and asked me what happened to them; I said they ate too many Skittles,” Novak said.

And there’s also a very impressive window display, showing zombies attempting to break through the glass:

It’s all like something out of a gleefully deranged horror movie, though it’s safe to say it’s not everyone’s taste.

But all things considered, Novak’s neighbors seem to be down with the project, cheering him on as he reapplied blood to the display.

“It was raining a lot and washing the blood away so I indefatigably ‘watered’ the bodies every morning for a while to the dismay of early dog walkers and joggers saying as they passed ‘Watering the bodies!’” Novak told the Dallas Observer.

But that hasn’t stopped Novak from getting a few visits from the police.

Novak seems to have recognized this as inevitable. Posting the photos on his Facebook page, he joked it was “How to Summon the Police.”

“When police intervene, you might be doing it right,” he wrote.

Police did indeed make a few visits, responding to calls from locals. It isn’t clear whether they really thought Novak crushed a real human skull with a falling safe, or if they just found it in bad taste.

Either way, the cops weren’t on their side: “They told me they thought it was cool and they were only there because they were required to reply to complaints from the sergeant,” Novak told the Observer.

“They were in formation at the door and when I opened it they asked me if it was all mine. I asked, ‘You mean the blood and the bodies? Yeah, that’s me.”

And he has no plans on slowing down: “Honestly, though, I think I could’ve used more [My plans] were way worse on paper. Next year though!”

We can’t imagine what his Christmas decorations are like!

What do you think of this display? All in good fun or going too far? Share this story with your thoughts!