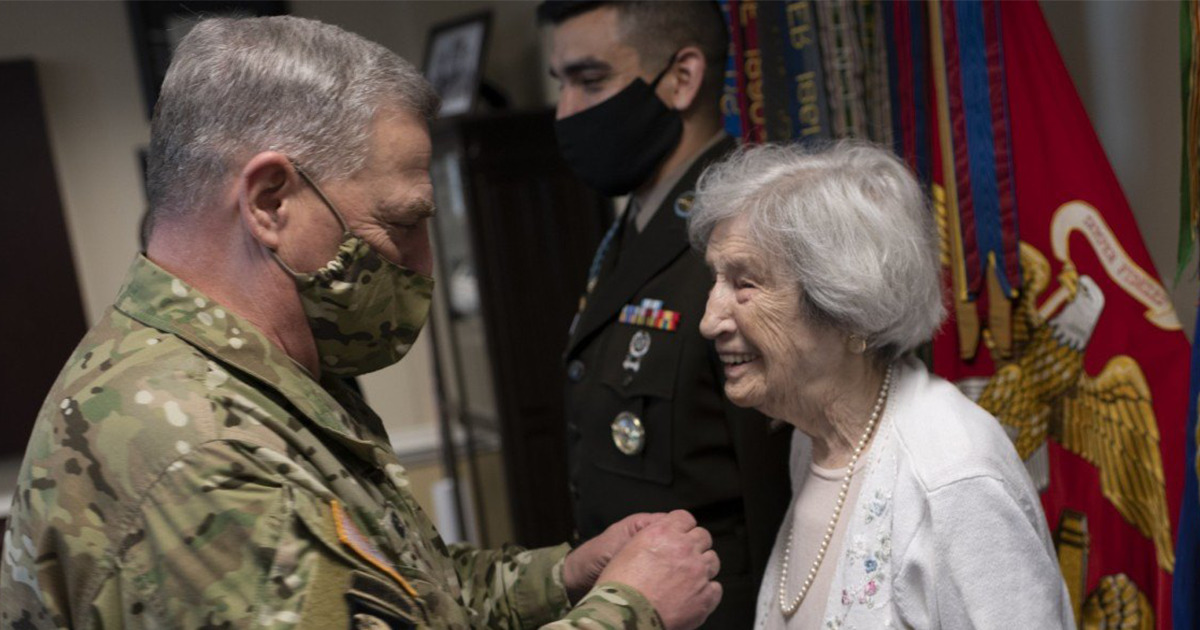 Veteran Army Nurse Regina Benson has proven to be a different kettle of fish to most people. This strong, inspiring woman, who helped to saves lives during World War II, turned 100 years old this year.

For the special occasion, Regina visited the Pentagon recently and talked about her service in the Army Nurse Corps in Japan.

Regina might be celebrating her 100th birthday in the middle of a pandemic, but she is not the kind of person to let that bring her down. On the contrary, she knows what tough times are and how to deal with them.

Right after her graduation, the 24-year-old nurse joined the Army Corps to serve her country, as per The Epoch Times.

It was 1944 and Regina Benson saw her four brothers leave to serve in the Armed Forces to fight in World War II. She felt she had to help too.

Regina, together with three of her nursing school classmates, was assigned overseas. The four nurses, who would go on to become lifelong friends, served in Hawaii and Okinawa, Japan, from September 1944 until April 1946, as per the U.S. ARMY.

Even before arriving at their destiny, things started to get difficult: “We were on a ship going across the Pacific, and we hit a bad storm,” Regina said in her interview in U.S. ARMY.

“So, the captain decided we would go down with the ship and, of course, everybody got on their knees and prayed and promised God many things. Then all of a sudden, the ship calmed down, and we went through the eye of the storm and everybody went back to what they were doing.”

Once in Japan, Regina Benson worked nonstop, 12-hour shifts in Army hospitals on wards and in operating rooms. This brave nurse says the most important thing she did during the war was “to give comfort to those troops who were dying.”

The most rewarding part of her Army nursing career was to be able to tell the mother of a young service member that their son did not die alone, because she was there with them.

But even the hardest times come to an end, and Regina remembers how happy she was the day the Japanese surrendered. She told how she jumped for joy when the war was over: it was time to return home.

“She was kind of fearless”

But not everything was bad at that time. While in Japan, Regina met her future husband, the supply officer and company commander Army 1st Lt. William Benson.

Once they were back in the U.S., the couple got married and started a family, and their children know the kind of wonderful mother they have.

“She was kind of fearless”, her daughter, Phyllis Benson, said.

In 1946, Regina left the Army and became a civilian surgical nurse, so she could continue saving lives.

On turning 100, she has a message for younger generations: “The United States is the greatest country in the world because of its freedoms and because people can carry out their dreams”.

She also told the youth of today to “to love their country, and remember the price [service members] paid for your freedom. Remain true to your country. We can pursue our dreams and hopes.”