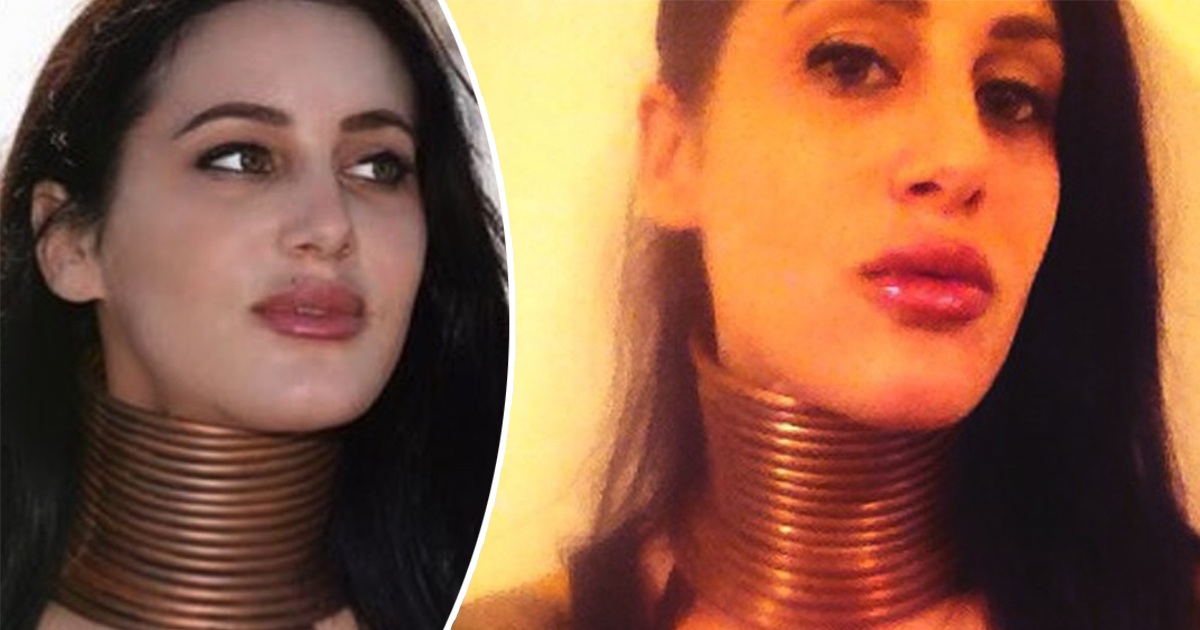 Over the years, we at Newsner have written about any number of colorful personalities and people with somewhat odd interests.

But a young woman who uses metal rings to make her neck longer because she wants to look like a giraffe?

Well, I can say I’ve never heard of that – until now.

Los Angeles native Sydney Smith, 35, spent over five years trying to lengthen her neck. Once she took off the rings, people were shocked, to say the least…

I have always found giraffes to be magnificent animals. They’re just so tall, so cool, and their pattern is truly eye-catching!

But I think it’s safe to say that Sydney Smith took her passion for giraffes to a whole new level. In 2011, Sydney began experimenting with metal rings with the aim of lengthening her neck. She used 11 copper rings at first – but would go on to add more later.

Her fascination for her own body goes back a long way.

Back in 1998, when Sydney went to middle school, she stuck out for a rather unusual reason.

“I’ve always had a long neck,” Sydney told The Huffington Post in 2014.

“In middle school, they called me ‘giraffe girl.'”

But Sydney didn’t consider her classmates’ comments as particularly hurtful – instead, she embraced her long neck, and became obsessed with extending it further.

In middle school, she used to wrap cut-up coat hangers around her neck as she went to sleep. According to Sydney, her parents just shook their heads and thought their daughter was “ridiculous,” but her stubbornness eventually paid off.

She said that her neck grew a few inches longer, thanks to her nightly stretching routines.

”After a few years it became obvious that my neck was longer than the other girls, but not freakishly,” Sydney explained.

”So I stopped for a while to consider if being a long-necked woman was what I really wanted.”

At this time, Sydney also found inspiration from the Kayan people, who live in Southeast Asia. It was especially one part of the group, the women of the tribe Kayan Lahwi, that Sydney found interesting. In their culture, it is very common to wear neck rings, brass coils that are placed around the neck.

Now, the neck itself does not become longer, but it gives off that impression. In the Kayan Lahwi culture, girls start wearing these rings at the age of five. As they grow older, more rings are added. The “necklace” is almost never removed – it is a far too complicated procedure.

There are various theories as to why these rings have become so popular among Kayan Lahwi’s women, but today most people wear the rings because they think they’re beautiful, and a symbol of their cultural identity.

If you look at the rings that Sydney Smith started using, they are very reminiscent of those worn by the women in the Kayan Lawi tribe.

She started designing her own copper rings, and put on more as time passed. What happens physically is that the weight of the brass presses down on the collar bone and compresses the rib cage.

“I was the first western woman (that I know of) attempting to elongate my neck,” Sydney wrote on social media.

Sydney claimed in 2014 that her rings stretched her neck to 10 to 11 inches long. However, she also had other reasons for wearing the metal rings.

“I had missed the comfort from the pressure on the top of my neck and shoulders and had been thinking about doing it again for a while,” she said.

“The comfort and exhilaration of this process was really all I was after.”

During this time, Sydney was making conscious choices, and she understood that her somewhat odd interest might attract attention.

While she worked, she used to wear a turtle neck so that the rings were not visible, and when Sydney had a job at a restaurant, she tried to stay in the background and not have much contact with the guests.

One day in 2011, however, she had had enough, and decided to remove the rings. Wearing them had made her neck muscles wither; they were barely strong enough to support her head. It was then that Sydney understood that she had to act.

She considered taking away the rings, but changed her mind after seeing Lady Gaga in concert. She was so inspired by the artist’s “freak empowerment message” that she regretted her decision. So instead of removing the rings, she had a friend redo them a bit.

Ultimately, though, the rings had a lifespan, and it came to an end. In an interview with the Daily Mail in 2017, she said she felt trapped and limited by her rings.

“I could not function as a long-necked woman with fifteen rings in the US. You could only do it if you were willing to isolate yourself completely and you never have to leave home. I spent five years of my life with rings around my neck and I became very introverted and isolated.

Sydney decided to remove the 15 rings and start a ”new” life.

Today, she has no problem calling herself “Giraffe Woman,” and if you browse Sydney’s Instagram, where she has 150,000 followers, she looks back on her time with the rings with a smile.

“My philosophy in life is, if you’re going to be weird, be confident about it !” she writes.

But her life as “giraffe woman” had physical consequences. When she removed the rings, she had bruises on her neck, and her muscles were fragile. According to Sydney, they were like some “kind of like arms on a toothpick” according to Sydney.

Fortunately, her recovery went faster than doctors had thought, and her body returned to normal before too long. Many people were excited to see what Sydney would look like after removing her 15 rings – but her appearance was perhaps not as spectacular as some might have expected.

“People have this misconception that they think your neck is going to look super long when you remove the rings,” she told the Daily Mail.

Today, many people miss seeing Sydney with the rings – others think she made the right decision to take them away.

“Some of you are disappointed to see me without the rings nowadays, but I feel myself evolving past them. Accept me now or don’t. I’ve never fully been accepted by the world with or without my rings. Either way, it’s the same. Self love is what matters most,” she wrote on her Instagram.

In recent years, Sydney’s story has started to circulate again, and many are curious about what happened to her. In a recent post on social media, Sydney commented on the newly-discovered interest, and gave a little more insight into her decision to cut off the rings.

“It’s been a few years since I removed my neck rings and the stories keep circulating. It’s been hard finding something equally as exciting since I took my rings off. In the end, I felt trapped and defined by my neck rings, as people expected me to continue as Giraffe Woman. In western society, it is very difficult to maintain that sort of lifestyle. Unlike the small villages in Cambodia where the longneck women live a more simple lifestyle that is conducive to their rings. With that being said, there was no way I could continue with the rings in Western society, with all of its demands,” Sydney declared in December 2021.

Today, the “Giraffe Woman” lives in Houston, Texas. She has created her own webshop and describes herself as a light worker and twin flame specialist.

She got the idea during the COVID-19 pandemic. It was then “Sydney found her true calling as a lightworker in the midst of her own suffering and spiritual awakening.”

It will be exciting to see what Sydney comes up with next, but I feel that we will hear about her again – in one way or another.

So what do you think of her rings? Were they beautiful, or did Sydney do the right thing by taking them off?

Feel free to share your thoughts in our comments section, and do not forget to share this article on Facebook if you thought her story was fascinating!