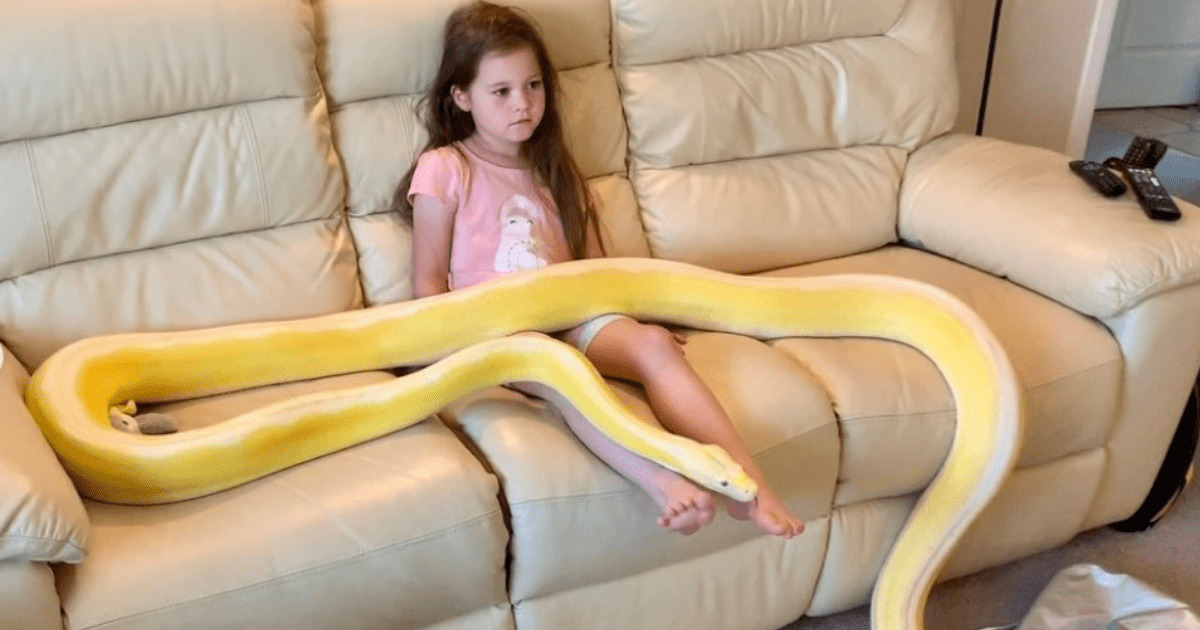 For most of us who aren’t familiar with snakes the sight of 7-year-old Emi having tea parties with a 16-foot-long python could be quite shocking.

But Emi, from Surrey, England, has been playing alongside her pet snake Cher since she was two years old.

At the time her Lavender Motley Sunfire Tiger reticulated python was tiny and Emi could carry her around her neck.

Now Cher is so big Emi can’t even lift her.

Reticulated pythons are the world’s longest snake with the longest ever recorded at 28ft long. It’s native to Asia and they’re excellent swimmers. Attacks on humans are not common but they are one of the few species that prey on humans.

Her dad Ed Taoka said a lot of time has been spent getting the two used to each other and more importantly teaching Emi to respect Cher and not to do anything that could stress her giant pet out.

“As a parent, I had to make sure that Cher was tame and sociable to be held,” he said.

Now the two spend a lot of time together and Emi clearly loves her pet python Cher.

Ed said he’s not worried about Cher with his daughter.

“She’s never left unsupervised with her and is not allowed to feed her until she’s 16,” he told The Dodo.

He said his daughter was lucky to get to experience these amazing creatures.

“No one gets to see the true nature of these animals and what they’re really like when they’re not being stressed out.

“As soon as a large constrictor is shown with anything, it’s always a bad negative perception.

‘The most gentle snake’

“Snakes haven’t bitten us the cats have bitten us and scratched us.

“Cher is probably the most gentle snake I’ve ever owned and Emi is very lucky.”

What do you think about Emi and her huge pet python? Feel free to leave your comments on our Facebook page and don’t forget to share.