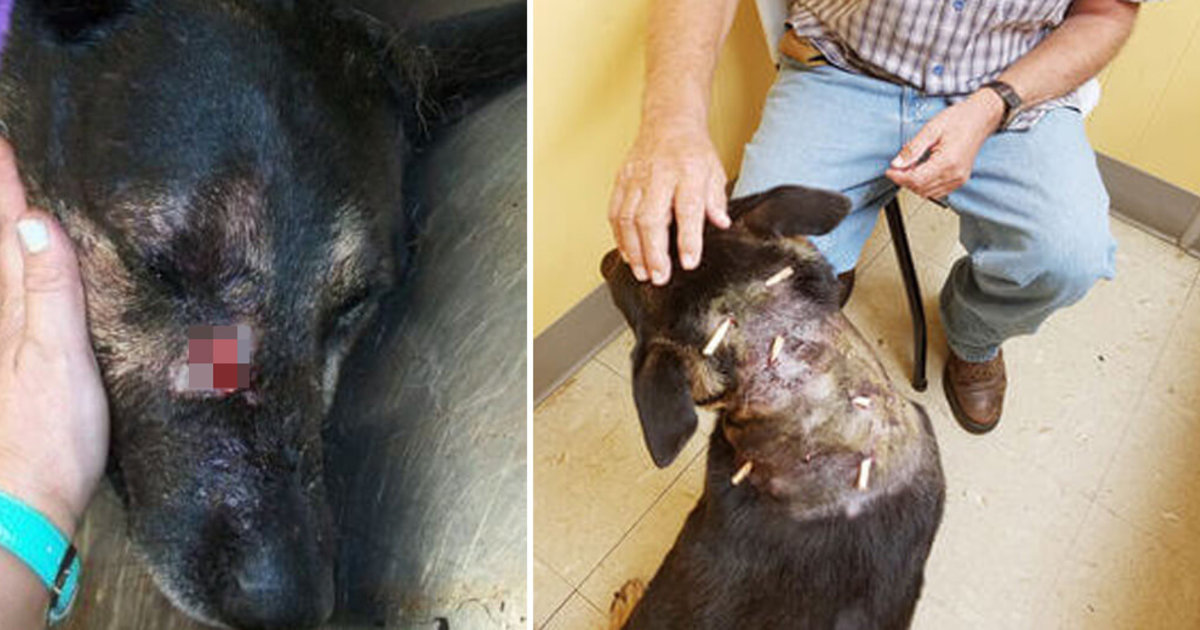 This story was just too unthinkable for me to wrap my head around at first.

Imagine your dog jumping the fence after he panics during a thunderstorm. When you go looking for him, can’t find him anywhere, so naturally, you start to worry. But you would never expect your beloved dog to go through anything even remotely close to what Elaine Darnell’s dog, Smokey, went through.

The unimaginable suffering that the 7-year-old German shepherd had to endure just broke my heart. But what I really don’t understand is how three men could’ve been so cruel and how they can live with themselves after what they’ve done.

Luckily, Smokey is on the mend—but I hope those guys stay locked away for a very long time.

Read the story below, but be warned—the pictures of Smokey are graphic.

Seven-year-old Smokey ran away from his Greene County, Tennessee home when he became frightened during a recent storm.

“He’s afraid of storms and a storm came up unexpectedly,” the German shepherd’s owner, Elaine Darnell, told the Greenville Sun.

The panicked dog ran about a quarter mile and had the terrible misfortune of running into three men who should never be allowed near animals.

Hector Mendoza, 25, Luis Mendoza, 26, and Francisco Flores, 32, were all later charged with felony counts of aggravated cruelty to animals for what they did to Smokey. They allegedly chained the dog and took turns beating him. And Smokey probably would have died if a neighbor hadn’t heard some noise and called the police.

When the sheriff’s deputies entered the mens’ apartment to investigate a drunk and disorderly call, they arrived just in time to save Smokey’s life.

According to the police report, when the officers opened a bedroom door, the three men turned around and a “medium-size dog came running from the bathtub.”

The dog, Smokey, “had several cuts and punctures about its body. One of the males was holding a bloody knife and the other was holding a long wooden stick, both being stained with blood,” the report continues.

When deputies entered the bathroom, they saw blood all over the floor. Shocked, they notified the Greeneville-Greene County Humane Society, and Smokey was taken to a veterinarian’s office for emergency medical care.

Amy Bowman, the Humane Society’s shelter manager, brought Smokey from the scene of the crime to the Greene County Veterinary Medical Center.

“He’s very friendly. He looked well fed and well taken care of. He looked like someone’s pet,” she said. “He just had the misfortune to show up at these guys’ house.”

Smokey had a collar but no identification, so the Greene County Sheriff’s Department posted a photograph of him on their Facebook page. And luckily, one of Elaine Darnell’s relatives saw it and contacted her.

Darnell went straight to the vet’s office to see her beloved dog. Smokey was still sedated, but she said, “You could tell he was glad to see us.”

Darnell continued, “It could happen to anybody, but I couldn’t imagine how anyone could do that to a poor animal. He had several stab wounds and he was beaten. Apparently they had the dog chained up and they had him in the bathtub. It’s horrifying.”

Smokey’s attackers are currently being held at the Greene County Detention Center awaiting their court date at the end of the month.

As for Smokey, he’s recovering from his wounds at home with his family.

I hope Smokey recovers fully and is able live his live without fear. What happened to him should never have happened and I hope that his attackers pay for what they did. Share if you agree!