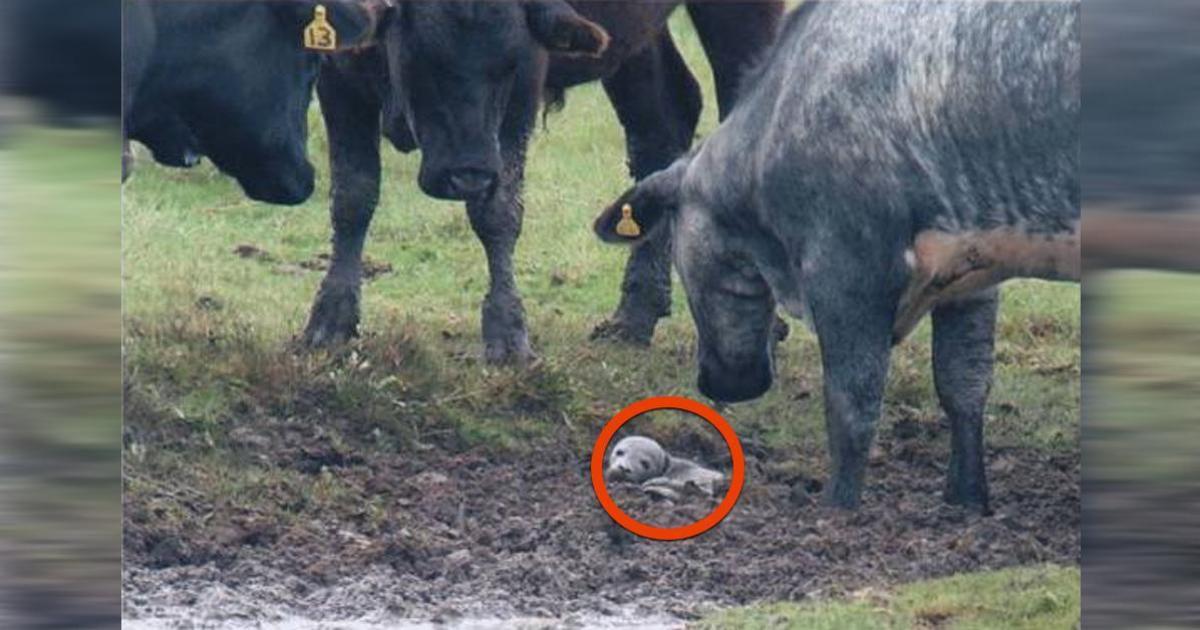 We have all heard about the food chain, and many of us have the perception of animals as always instinctively hunting other animals that are smaller or weaker than them.

But in reality, cases of animals that actually rescue or protect smaller and more vulnerable animals are seen all the time.

Just take a look at this story from 2015, but so worth sharing once again.

67-year-old bird watcher Ian Ellis was out on an excursion in Lincolnshire, England one morning. He was on the lookout for birds, when something completely different caught his eye.

He noticed a group of cows strangely gathered a short distance away. There appeared to be about 30 of them standing in a circle, looking down at something suspicious in the middle. Ian pulled out his binoculars and looked out to find out what the commotion was all about.

That’s when he saw what it was that the cows were surrounding.

Right there in the middle of all of them was a baby seal.

The seal was only a few days old and had been separated from its mother. It appeared to have been swept onto shore and gotten stuck in a mud puddle.

If it weren’t for the group of curious cows, Ian would have never found the little seal, and the poor creature would probably not have survived much longer.

Ian quickly pushed himself through the crowd of cows before any of them accidentally stamped on or crush the little thing. He carefully picked the seal up and placed it inside of his coat, and carried her away from the scene.

He then contacted the Natureland Seal Sanctuary for help, an organization “dedicated to treating and returning seals to their natural habitat.”

At first it was unclear whether the seal would even survive. She was very malnourished and dehydrated. At the sanctuary, they named her Celebration and she was given appropriate food and beverages. The idea was to make her strong enough to release her back into the sea.

The plan worked. Celebration grew strong enough and was released back into the ocean to live freely.

Thank goodness those cows spotted her that day and that Ian was around — talk about heroes.

Please consider sharing this great rescue story to honor all wildlife and animals who help other animals!