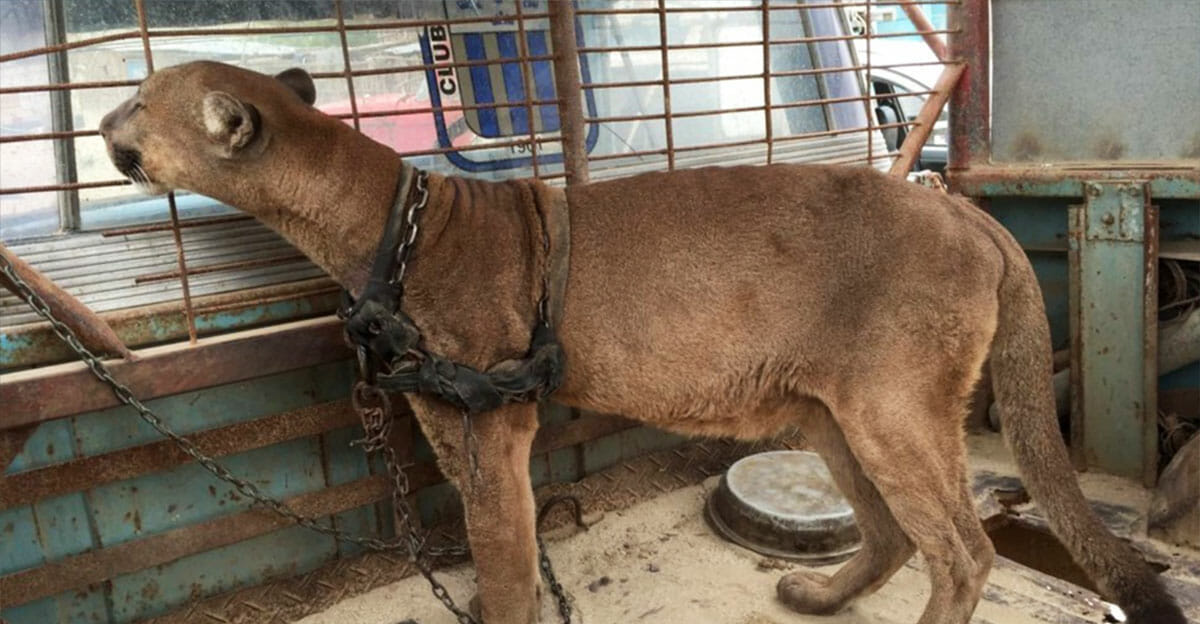 The cargo bed of an old rusty pickup is no place for animals to live. Especially not a grown-up wild cat.

Unfortunately, it was exactly where puma Mufasa was forced to live for 20 years of his life, as part of the main attraction for a travelling circus in Peru.

Of course, simply because an animal is considered “exotic” or “cool” doesn’t mean they should be forced to live their lives entertaining people.

Sadly, though, there are still many living creatures used in the entertainment industry, and in circuses and zoos all around the world.

Many of these animals are forced to live in small cages and abhorrent conditions; some of them never get the chance to experience life in their natural environments.

The puma Mufasa was one such animal, kept in chains for the entertainment of people. Pumas were known as mountain lions by new settlers in North and South America, for they believed the pumas they encountered were actually lionesses.

Since then, this magnificent feline has garnered something of a mythical status, and now many people have the desire to see pumas in real life. Thus there unfortunately exists a market for travelling circuses to exploit.

Take Mufasa, for example. When he wasn’t performing for the masses, he was kept in the cargo bed of an old pickup. He spent 20 years as a performer, forced to live a life he never wanted.

After many years of terror, Mufasa won free of his captors and their chains in 2015, when the group Animal Defenders International rescued him. It took months and months of hard work, but eventually the old puma was set free.

The organization had been keeping tabs on him as they battled to close the Peruvian circus where he had been performing for years. Mufasa was the last wild animal rescued from the circus, according to the group. Finally Mufasa was no longer facing a life of insecurity and terror. Gone were the people who only wanted to use him to make money.

Instead he was handed the chance to spent his last years in freedom. Mufasa couldn’t be released into the wild after the life he had endured, of course, and therefore a sanctuary was built for him, one that mimicked the natural environment of the Peruvian forest.

This was where he was meant to be; where he could thrive and enjoy the life he was supposed to have.

Just watch the video below. The moment he gets the know the feeling of grass under his feet is truly amazing!

Unfortunately, Mufasa passed away in December 2015, just a few months after being given his freedom. His life in the circus, trapped in the cargo bed of a truck, had taken its toll. He suffered from kidney failure and other age-related problems.

We’re sad that he couldn’t have more time to enjoy himself in the forest, but the real tragedy would have been if he’d never been able to experience life outside the circus at all.

Mufasa’s story is a major reminder for us all as to why we should never allow animals to live their lives in chains, displayed purely for human enjoyment. Let animals be animals, I say!

Please SHARE this moving video of Mufasa if you agree!