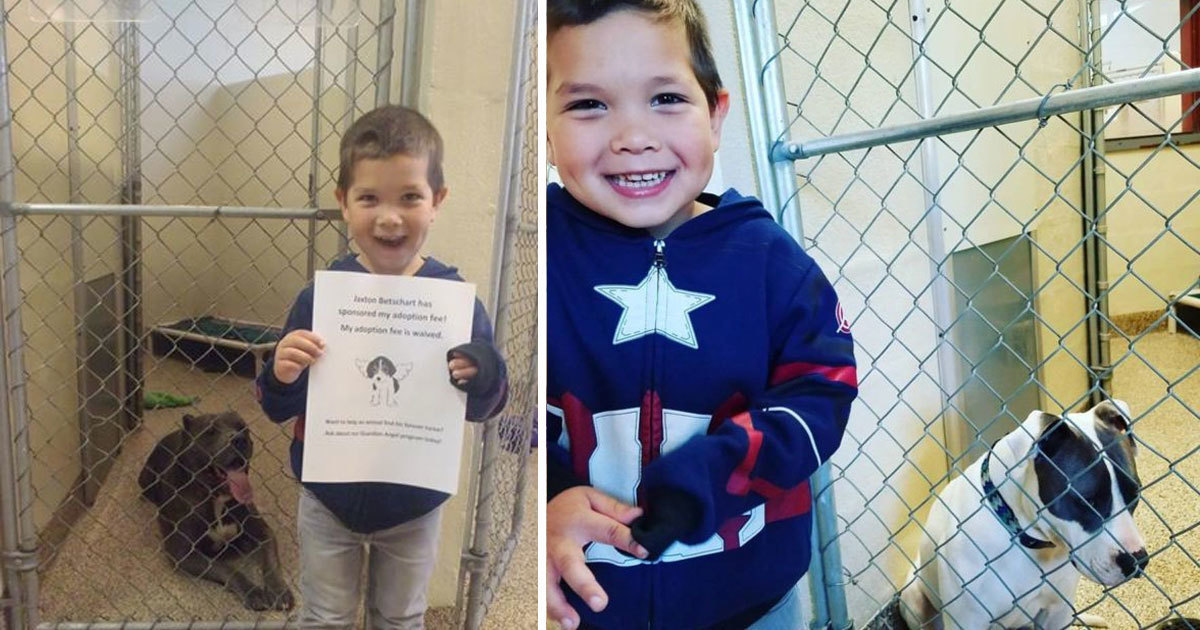 A four-year-old boy in the United States has done something very special.

And he did it using his allowance.

When he went to an animal center, he immediately bonded with several four-legged friends.

Which is why Elyse Betschart was both surprised and pleased when her son Jaxton decided to do something a bit more humanitarian with his piggy bank.

Jaxton’s mom brought him to the Charleston Animal Society in South Caroline, so they could sponsor a pit bull named Penelope. But when Jaxton got there, he decided to sponsor an additional pitbull, and help give them a new, loving homes. So he paid their adoption fees with money from his own pocket.

One of the dogs is called Tank. When the little boy saw him, he instantly fell in love. He ran into Tank’s cage and, according to IHeartDogs, said, “Mommy! He’s big and chunky just like me!”

Jaxton asked if he could adopt Tank, so that they could play Incredible Hulk together, but unfortunately, his mom had to say no.

Jaxton’s family is a military family and pit bulls are banned in military housing. But the family dreams that sometime in the future they can open their own animal center.

Jaxton’s mom explain him that they couldn’t adopt the two dogs. But instead, he could help them find other homes. So he chose to sponsor both pit bulls with his allowance—becoming Tank and Penelope’s guardian angel.

“A lot of people don’t realize that sponsorship is an option, that you can actually tie that money to a face,” Jaxton’s mother told IHeartDogs.

Sponsoring a dog at an animal shelter helps the animal get the necessary vaccines, spay/neuter surgery, microchip, and other things that it might need.

The staff at the Charleston Animal Society were obviously touched that the little boy was so committed to the two dogs and wanted to help. They even wrote about his visit on Facebook. Lots of people commented and paid tribute to the Jaxton’s kind gesture.

Most people didn’t know that they could sponsor dogs in this way, which means that Jaxton helped spread the knowledge. Many commentators asked what they could do to to help the animals find new homes like Jaxton did.

And thanks to Jaxton’s efforts, both Tank and Penelope were adopted in no time.

After Jaxton’s story spread online, the animal center has signed up lots of sponsor for its animals.

I don’t know if you can do something like this in your area, but animal shelters certainly accept all the voluntary help they can get! Consult your local animal center to see how you can help make life a bit better for homeless animals!

If you also think that all animals deserve a loving home, please share Jaxton’s story!