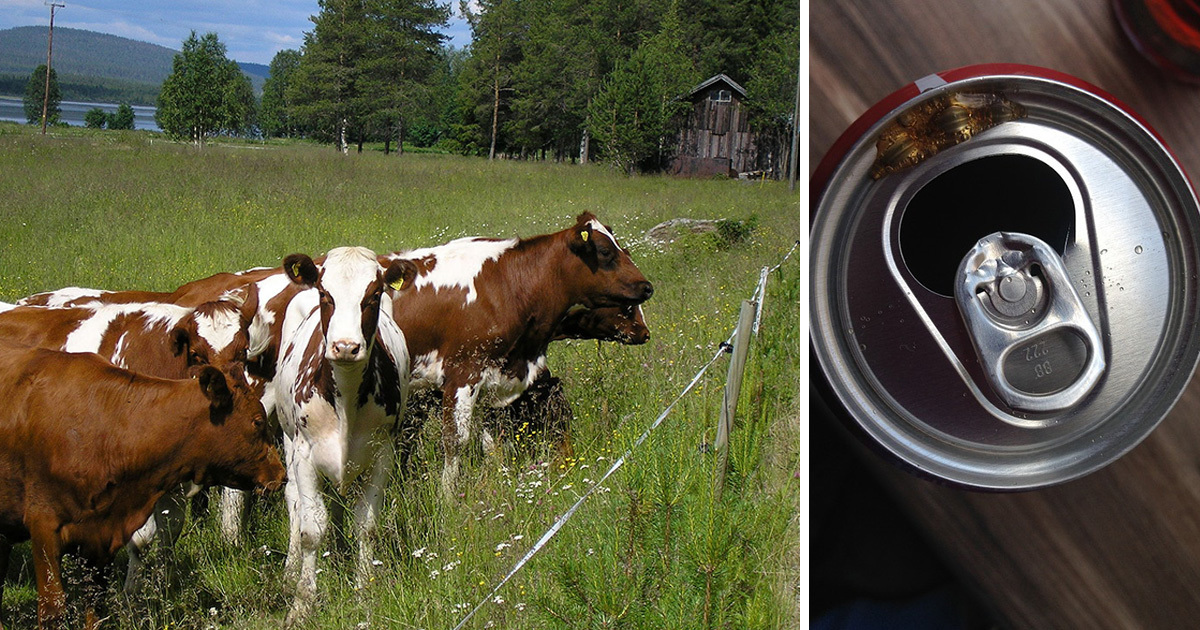 You’ve probably seen aluminum cans on the side of the road so often that you don’t even notice them anymore. But besides being ugly, metal cans also pose a direct threat to animals.

Every day, soda and beer cans end up in cows’ stomachs. Their sharp metal edges rip the lining of cows’ stomachs apart from the inside, killing about 5,200 cows per year in Sweden alone, according to the Swedish newspaper Land.

Now, farmers there are raising awareness about this deadly nusiance which affects cows in countries all over the world.

When people throw cans out of their car windows in rural areas, they probably don’t have any idea of the damage they’re doing. If the can happens to land in a farmer’s field, it will eventually be cut to pieces by a mower. And from there, the aluminum shards will end up in bales of hay and fed to cows.

Then when cows eat the metal shards, their stomachs will be cut up from within.

Now, farmers in that country want to raise awareness about what happens when people throw aluminum cans onto fields.

“The shards go straight into their stomachs and then they chew them over several times. It cuts the animals up from within. Unfortunately, there’s nothing we can do and it’s not possible to send such a cow to slaughter, either,” Lotta Zetterlund told Sweden’s national radio station.

Josefine Söderqvist is 23 years old and works on a farm with her father. Her family have lost four cows in recent years after aluminum cans have been found in the lining of their stomachs.

“The pieces are sharp and cut cows’ stomachs from the inside. We pick out everything we can see, but we can’t see everything,” Josefine told Swedish newspaper Metro. “It’s terrible that people just casually throw stuff out the window.”

Sweden’s Food and Agriculture Organization is currently running a campaign to raise funds for the effort. It aims to inform the public about the effects of littering on out environment.

Share if you also think that throwing cans out of car windows is wrong! Together we can help everyone understand that littering is unacceptable.