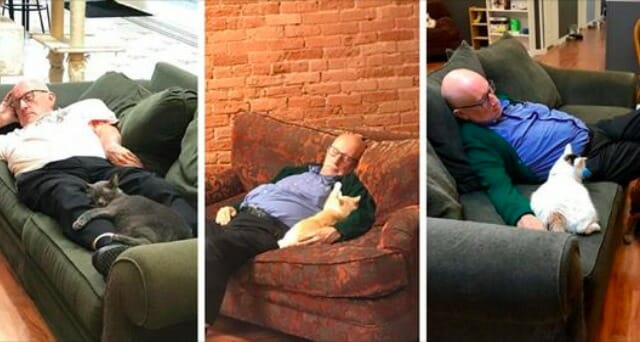 There are plenty of ways to help vulnerable animals in need. And thankfully there are wonderful animal friends everywhere doing just that.

Whether they’re feeding them, treating them when they’re sick or helping find them a loving forever home, these animal heroes deserve our full admiration and appreciation.

Here’s one volunteer who has found the sweetest way to do his part.

75-year-old Terry Lauerman has been visiting a shelter near his home, the Safe Haven Pet Sanctuary, in Green Bay, Wisconsin for months.

… And he’s been doing so every single day.

The cage-free sanctuary rescues disabled cats that risk being euthanized.

Initially, Terry visited the shelter with a single, rather unconventional request. He walked in one day, cat brush in hand, and simply asked if he could help out by regularly brushing the furry felines.

The shelter soon had Terry fill a volunteer form and voila! He became a regular patron at the shelter, visiting every day and remaining about three hours.

But his fame grew when the shelter staff began noting another sweet way Terry seemed to be helping the cats. After brushing the happy cats, the senior frequently dozed off. The cats then curl up next to him and together, Terry and the cats simply enjoy one another’s company.

“[He sleeps for] about an hour, then he’ll wake up and switch cats,” said Elizabeth.

The shelter staff couldn’t be more pleased with Terry’s wonderful presence and beautiful spirit at their sanctuary — and, obviously, neither can the cats.

“We are so lucky to have a human like Terry,” the shelter wrote on Facebook. “Terry just came along one day and introduced himself. He said he’d like to brush cats. Eventually, it became everyday. He brushes all of the cats, and can tell you about all of their likes and dislikes. He also accidentally falls asleep most days. We don’t mind – cats need this! Terry is a wonderful volunteer.”

To all the attention, Terry says simply that he hopes he can  compel more to help out in any way they can to support animals in need.

We are so lucky to have a human like Terry. Terry just came along one day and introduced himself. He said he'd like to…

How sweet is this? These cats are clearly in great hands with a beautiful soul like Terry by their side. Share to thank Terry for his wonderful deeds with these cats!