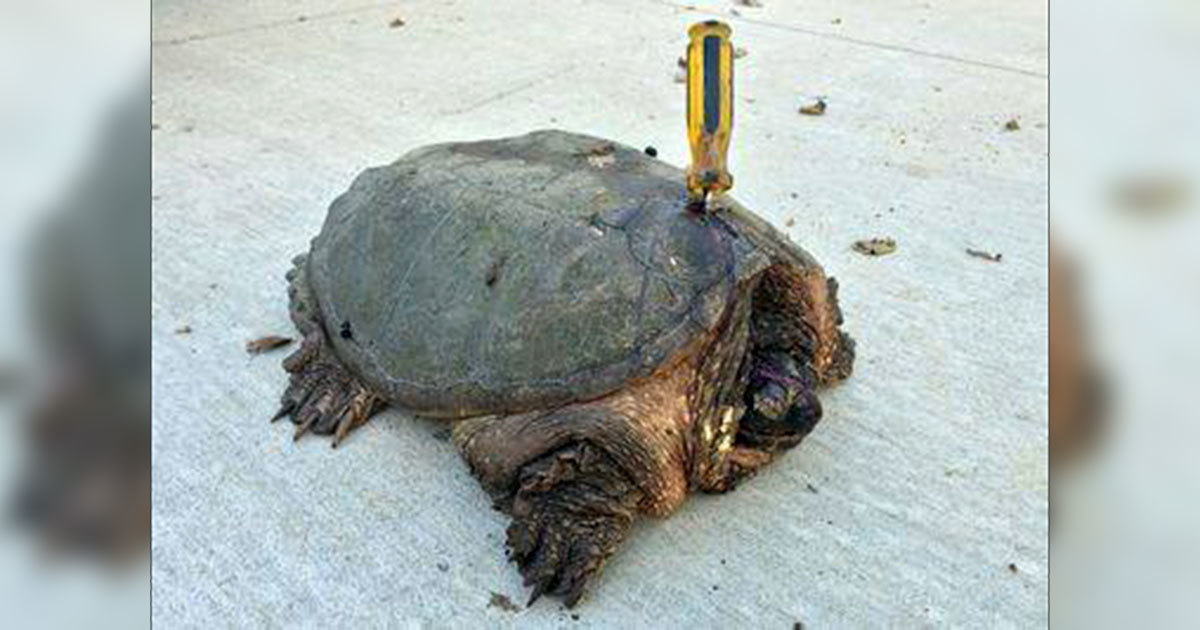 Turtles are amazing animals. They are beautiful, never hurt anyone, and can live incredibly long lives.

Tuttle has lived for about 70 years and never hurt a soul. Despite this, someone cruelly thought it would be entertaining to abuse her in a most horrendous way.

Fortunately, however, the story ends well!

Tuttle was discovered outside a house in Illinois, USA. The residents of the house, Paul and Diane Tuttle, immediately saw that she needed help. Someone had stabbed her with a screwdriver, which remained lodged in her shell. Upon closer inspection, they could also see that she had injuries on her head.

Despite her serious injuries, Tuttle refused to give up. She stepped courageously into the family’s yard, as if knowing that she would received their help.

And indeed, she did.

The Tuttles rushed Tuttle to the All Pets Vet Clinic in Peoria for medical treatment. There, it was revealed that Tuttle was blind in one eye, had a fractured skull, and internal injuries from the screwdriver.

It would therefore be a long road to recovery for Tuttle. But she proved capable of making it all the way.

After receiving treatment, the Tuttles contacted zookeeper Douglas Holmes from the Peoria Zoo for help. He agreed to take her in and keep an eye on her until she was ready to be released back into the wild.

Tuttle was named after the family who discovered her and saved her life. It was now up to Douglas to make sure she made it all the way.

Tuttle remained with Douglas for nine long months – then finally came the day when she was healthy enough to be released back into the wild.

“Animals deserve every chance. It always feels good when you release an animal back into the wild,” said Douglas.

Unfortunately, it was never discovered who inititally put the turtle through that terrible ordeal. But I hope he never does anything like that again. Animals should be treated with respect!

What amazing rescue efforts! THANK YOU to the heroes who helped Tuttle get his life back. Please share this article on Facebook if you agree they deserve all the thumbs up in the world.