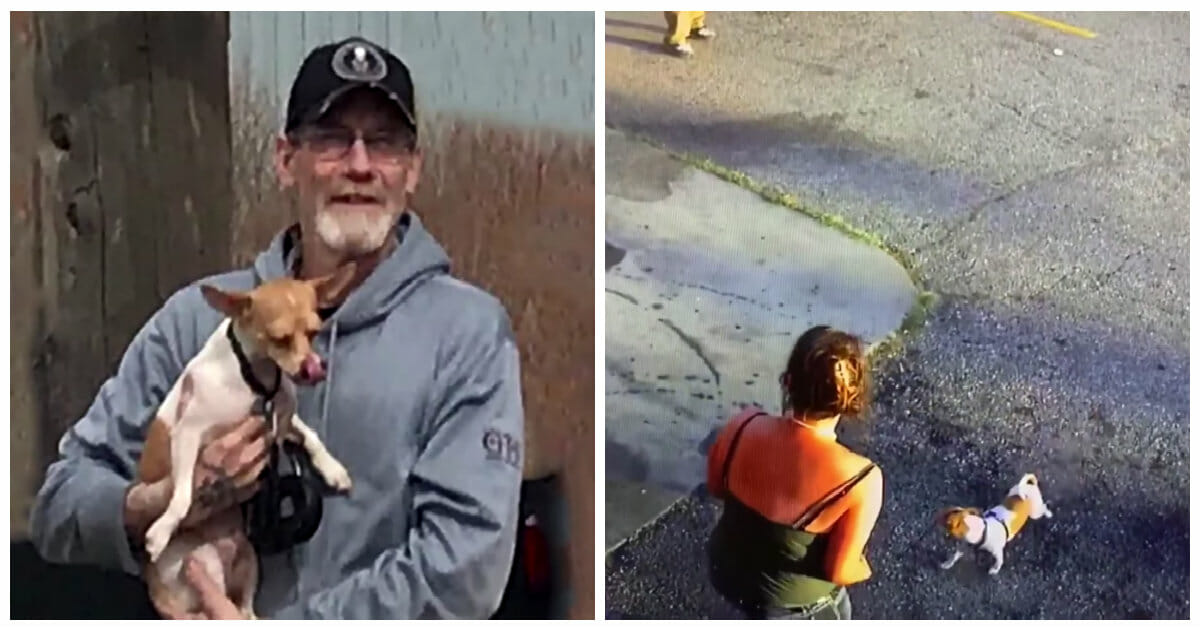 A tragic incident was made all the more painful by an unbelievable act: as a man lay dying, a woman snatched his beloved dog, leaving his mourning family trying to track him down.

On July 30, Robert Corbey, a 59-year-old from Longmont, Colorado, had not been feeling well all day, but decided to walk his pet chihuahua Sampson to the nearby 7-Eleven.

According to CBS Denver, Corbey had suffered from mental issues and depression, and Sampson was his registered therapy dog.

At the convenience store, Corbey suffered a seizure and collapsed. Onlookers rushed to help, and emergency workers arrived to rush the man to the hospital.

But as all this was happening, another bystander did something heinous: she stole Sampson.

The suspect was caught on surveillance cameras. In the footage, you can see the dog being led away from the scene as he looks back at his owner. It was, sadly, the last time he would see him: Corbey died at the hospital.

The shocking turn of events left the man’s family devastated, both mourning Corbey and losing his beloved pet all at once.

“He was his light,” Corbey’s niece Kelly Pleffner told CBS of Sampson.

The family did not recognize the woman in the footage. The Longmont Police Department issued a statement, asking for information about the woman and making a plea on behalf of the family.

“Public Safety staff does not know what the purpose was in removing this dog, but we ask that you please return their dog to the Longmont Police Department,” the department wrote on Facebook. “They not only lost a treasured family member, but are also missing his companion.”

Luckily, the dog was not missing for long. The following afternoon, Longmont Deputy Police Chief Jeff Satur got a tip that the Sampson had been spotted near a motel in Longmont.

“I said, ‘Well, I’ll run up there,’” Satur told the Longmont Times-Call. “As I passed Sixth and Main I saw him, and recognized him immediately.”

Satur found two people walking Sampson, neither of whom was the woman in the footage, but they said she had given them the dog.

While the culprit was still at large, the dog was brought back to the mourning family in what was described as an “emotional reunion.”

“He was thrilled to see them,” the police wrote.

“We were just so worried,” Pleffner told CBS. “We are so grateful to have him back… It feels like we have a piece of my uncle having Sampson back.”

And then, the next day, an incredible coincidence brought the dognapper to justice.

On August 1, Longmont Police officers investigated a vehicle theft in the area. They apprehended the suspect, 30-year-old Melody Mellon.

They then discovered that she was also the woman who took Sampson… along with a long list of other offenses.

“As a result of their investigation, Ms. Mellon was arrested on several outstanding warrants, assaulting a police officer, resisting arrest and the auto theft,” the Longmont Police Department wrote. Mellon was brought to Boulder County Jail.

Those few days were undoubtedly an ordeal for everyone involved, between the untimely death and the missing dog. But luckily, things worked out, justice was served and the family can now have some peace.