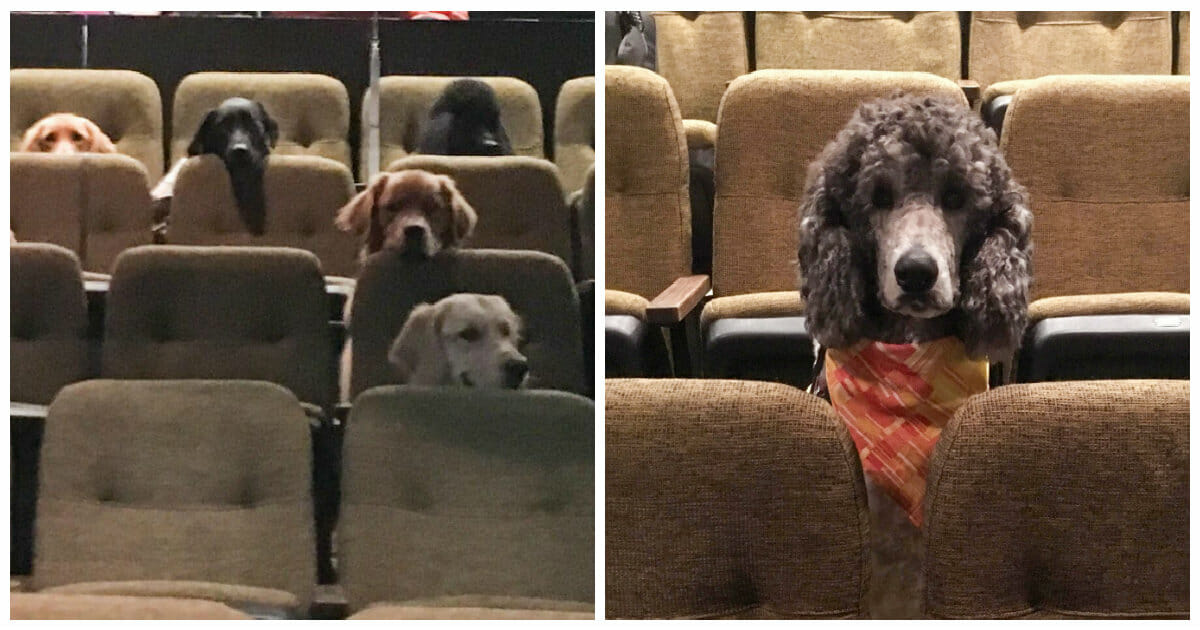 A performance of a musical had a very special audience recently, playing to a crowd filled with the most unexpected theatergoers… a group of dogs! (Luckily, they weren’t there to see Cats.)

Photos of the dogs attentively watching the stage performance went viral this week, and while it’s nice to think that our pets have developed a taste for showtunes, the story behind the photos is fascinating.

The photos were taken at the Stratford Festival, an ongoing theater festival in Ontario, Canada. The dogs attended a performance of the musical Billy Elliot.

The reason: these guys are service dogs, and a night at the theater prepares them for attending future events like this with their future owners. The evening was part of a two-year training program with K-9 Country Inn Working Service Dogs.

“It’s important to prepare the dogs for any activity the handler may like to attend,” Laura Mackenzie, K-9 owner and head trainer, told CBC. “The theatre gives us the opportunity to expose the dogs to different stimuli such as lights, loud noises and movement of varying degrees. The dogs must remain relaxed in tight quarters for an extended period of time.”

According to CNN, the dogs have also attended events like zoos, subways and fairs, getting prepared to stay calm in any situation.

The dogs attended a special performance designated by the festival as a “Relaxed Performance,” which “specifically designed to welcome patrons who will benefit from a less restricted audience environment.”

“Patrons of all abilities are welcome, including but not limited to those with intellectual or learning disabilities, sensory processing conditions or autism,” the festival’s site reads.

So how did the dogs do? Apparently, they were on their best behavior… and even enjoyed the show!

“All of the dogs were fantastic and remained relaxed throughout the performance. Some even watched through the cracks of the seats,” Mackenzie told CBC. “The dogs loved the show almost as much as their handlers.”

“Everybody was so thrilled to see all these dogs at one time in the audience,” said festival spokesperson Ann Swerdfager. “It’s really exciting. And it’s thrilling to be part of something that is going to serve theatregoers of the future.”

The photos went viral online, getting picked up by popular dog Twitter accounts and even celebrities like Mark Hamill.

“The positive reaction to our outing is both shocking and amazing,” MacKenzie told the Huffington Post. “We are hoping that our adorable photo will be a good opportunity to educate the public about service dogs and accommodating people with disabilities.”

It’s inspiring to see these dogs behave so well at the theater, and are getting training that ensures they can accompany their future masters wherever they want to go.

And honestly, there are plenty of humans who could use some training on how to behave in the theater. Put your phones away, people! The overture’s starting!

ICYMI: We had some pawsitivly adorable audience members from K-9 Country Inn Service Dogs during last weeks Relaxed Performance of #sfBillyElliot. Our Next Relaxed Performance is #sfNeverending on October 2nd. https://t.co/xaBwx65W8J pic.twitter.com/otyNjm5pUS