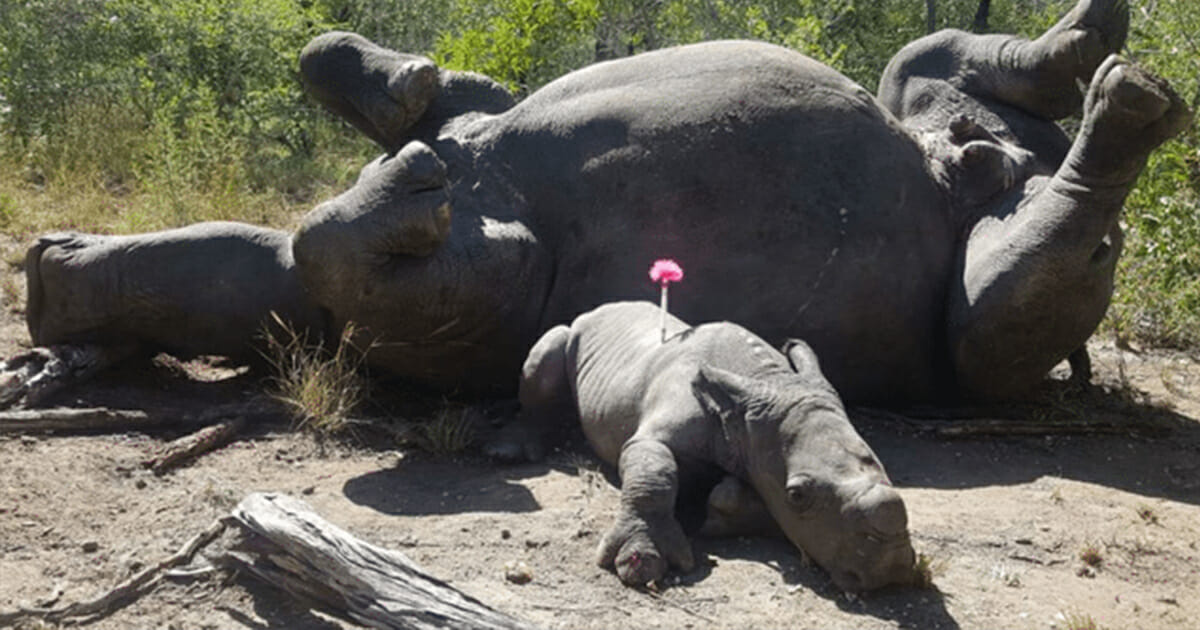 Year after year, outrage after outrage; it seems there will never be an end to poaching.

There’s a bitter and sad truth to the fact that some species are being pushed to the very edge of extinction by trophy hunting. Take African rhinos for example, often killed for their horns and the money they can make on the black market.

In one particularly tragic recent case, rescuers came across a mother rhino who had been killed by poachers. Her baby had been set upon as well, though had stayed with his deceased mom, unsure of what to do alone …

When rescuers came across the horrifying scene, they realized the baby was still alive. Whilst it was too late to try and save the mother, they took the baby with them in the hope that he could be saved.

As per Petronel Niewouldt of the Care for Wild Team: “It was instinctive for him to try and stay close to his mother to protect her, and the poachers with no sympathy or hesitation whatsoever lashed out at him so that they could finish their heinous crime of taking his mother’s horn as quickly as possible.”

The team transported the baby to Care for Wild Rhino Sanctuary, the world’s largest rhino sanctuary and orphanage. He had a machete wound on his back, one of his toenails had been cut to the nailbed, and he was terrified.

After sedating the caldf, a plastic surgeon was called in to stitch up the woods, with an emphasis placed on leaving as little scarring as possible.

The rescuers say that the baby, whom they named Arthur, is now doing well in recovery. However, he still pines for his mother, not understanding that she can never return. For the team, it’s a particularly heartbreaking sound.

“He still calls for his mother, it is a heart-wrenching sound and one that he should never have to make. Her death will affect him emotionally long after his physical wounds have healed.”

In the wild, a rhino calf stays with his/her mother for up to three and a half years, during which time she’ll teach her baby everything they need to know. Even if Arthur had survived the ordeal naturally, the team know he would have died through being unable to fend for himself.

They explain: “A rhino calf stays with his mother for up to three years and in that time, she teaches him everything he needs to know, from what to eat and how to keep himself safe. She will teach him how to behave when in the company of other rhino and he will learn everything necessary from her so that he has a good chance of growing into a strong adult. Who is going to teach him now?”

Poaching needs to be stopped and stopped now. Regulations and rules are getting ever tighter, but until a definitive solution is found, surely we can’t hope to prevent innocent animals like Arthur and his mother falling victim to those without a heart.