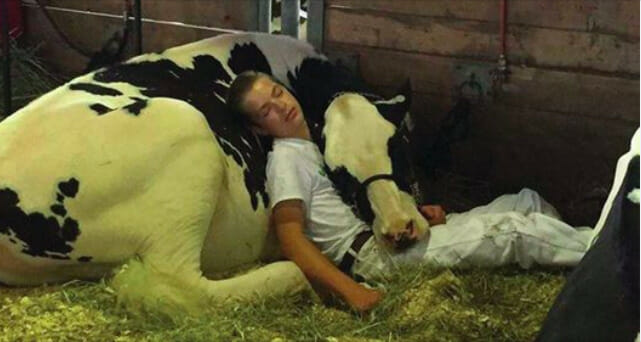 A picture is worth a thousand words, it is said, and I am fully prepared to agree. Quite often, no words can quite capture a special moment as a camera can. A photo taken at the perfect time can reveal love between two individuals — or as in this case, between a boy and his cow.

After a photo of the two was posted on Facebook, it was shared by thousands — and I totally understand why: It is absolutely heartwarming.

15-year-old Mitchell Miner grew up a farm in Iowa. It’s on this farm that Mitchell has his own beloved heifer, Audri.

Mitchell and Audri returned home after attending the the Iowa State Fair, where they competed in the youth dairy cattle show. They’d fought valiantly and came in fifth out of a total of seven entries.

Needless to say, when the competition was over, they were both completely exhausted. So they decided to rest.

After some time, Mitchell’s father went looking for his son — and what he found in the barn melted his heart.

15-year-old Mitchell Miner and his heifer have spent nearly every day together for the last two months. https://usat.ly/2w73rxg (Photo: Jeremy Miner)

Mitchell and Audri had both fallen asleep right by each other. Mitchell rested his head on Audri’s belly, and the cow had put her head on Mitchell’s knee. It was all just very cozy.

“When you spend that much time with them, they get really comfortable with you,” Mitchell’s mother, Laura Miner, told Des Moines Register.

The very special bond between Mitchell and Audri just melted my heart. I’m always impressed when I see people — and youth in particular — give animals the love they deserve. Share if you agree.