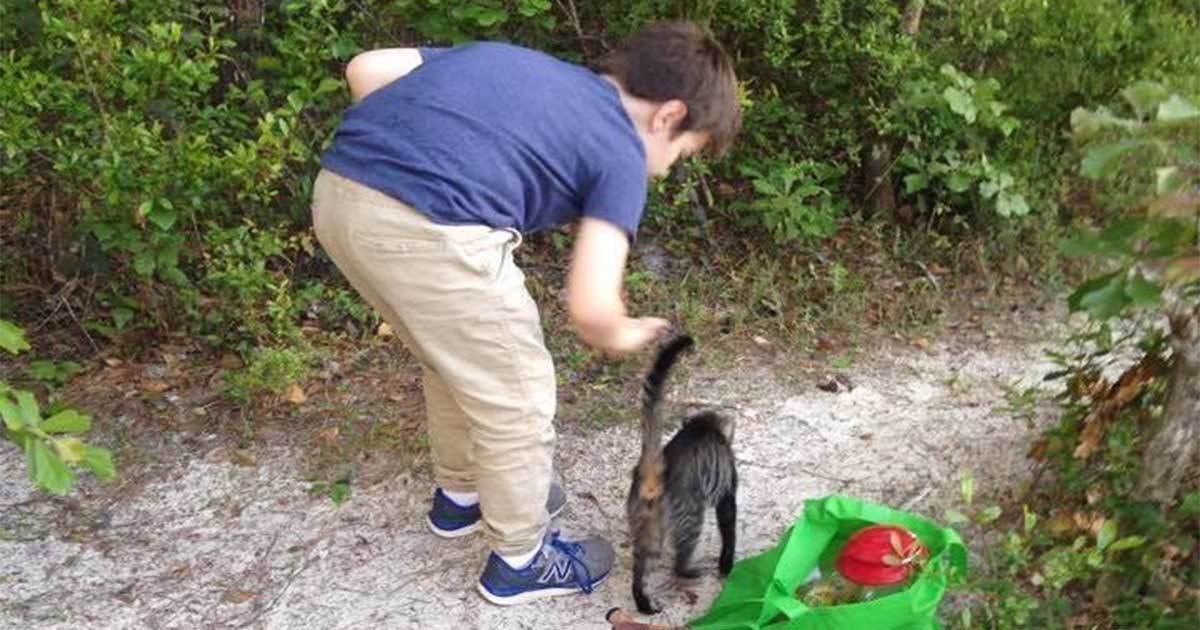 Spotting animals in nature is always fascinating. So you can imagine how this dad and his little boy felt when a stray cat approached them and begged for food during a recent camping trip.

After they gave the cat got some food, she left and they thought that she was gone forever.

So they were both surprised the next morning when they heard some unusual meowing outside their tent.

Michael and his son enjoy camping together. They go often and even have a secret spot.

But one recent weekend, they found a new place to pitch their tent, and soon met an unexpected stranger.

Shortly after arriving at a small forest pond, a cat appeared.

They thought the cat would spend the weekend with them—but later that evening, she was gone without a trace.

Then early the next morning, they heard meowing outside their tent. But they quickly noticed something special about the meowing. It was coming from more than one cat.

When he opened the tent flap, eight eyes were staring back at them. The thin cat had three kittens and brought them to Michael and his son so the kind humans could not only take care of her but also her kids.

Michael realized that he couldn’t just leave the poor kittens and her heroic mom out in the woods. He decided to bring them back home.

“The next morning we caught over 13 blue gill and a couple catfish. Let’s just say by the end of the day the momma cat was stuffed. There is no way this cat was not domesticated the way she craves human attention,” Michael wrote on Imgur.

The mom and her kittens are now safe in the comfort of a loving home. They’ve been to the vet and have received vaccinations and a clean bill of health.

“It’s been a week now and they love it here. My family has decided we are keeping all of them,” writes Michael.

This lovely story really makes me happy, partly because the mother cat just wanted the best for her kittens, but also because Michael and his son acted so wonderfully giving them a loving home where they’ll never have to go hungry again.

Don’t forget to share this story with your friends so they can also read about this lovely mama cat!