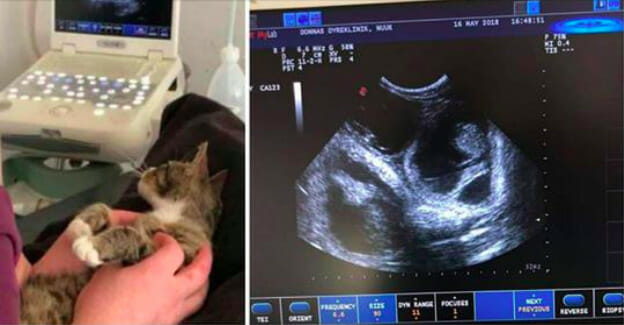 Discovering that one is pregnant has to be one of the most momentous and significant events in one’s life. The feelings that overcome you when you look at your tiny baby for the very first time on an ultrasound screen are especially moving.

Most parents remember this moment forever. That first look, the sound of their baby’s heartbeat — both create a powerful rush of emotions.

But who said such reactions were restricted to humans?

1-year-old Ulla was a stray before she was rescued off the streets of Nuuk, Greenland.

The adorable tabby was taken to a shelter, but about a month after her arrival, it became apparent that, well, she wasn’t quite ‘alone.’

After noting her ‘healthy’ eating habits and bulging middle section, Tone Frank, one of the shelter’s board members, began suspecting that Ulla was pregnant.

Tone promptly set up a meeting with the vet to help put his suspicions to rest. Ulla was, needless to say, rather unexcited about having to lay still while the vet scanned her belly in search of little kitties.

Tone’s suspicions were spot on. Ulla was indeed very pregnant.

“It was pretty amazing. I’ve never seen a cat get an ultrasound. We saw little kittens in her tummy,” Tone said.

But Tone and the vet were apparently not the only ones to spot the little kittens in Ulla’s belly. Ulla did too… and her reaction was just priceless:

While we can’t be entirely sure what Ulla is thinking or feeling here, she sure is hilarious!

The vet concluded that Ulla was carrying 4 or 5 kittens, but the news just gets better. Sweet Ulla was soon adopted into a loving forever home, where her new owners have already agreed to foster the kittens until they could also be adopted.

I’m so happy for Ulla! What a hilarious reaction. Share with your family and friends if this brought a smile to your face, too!