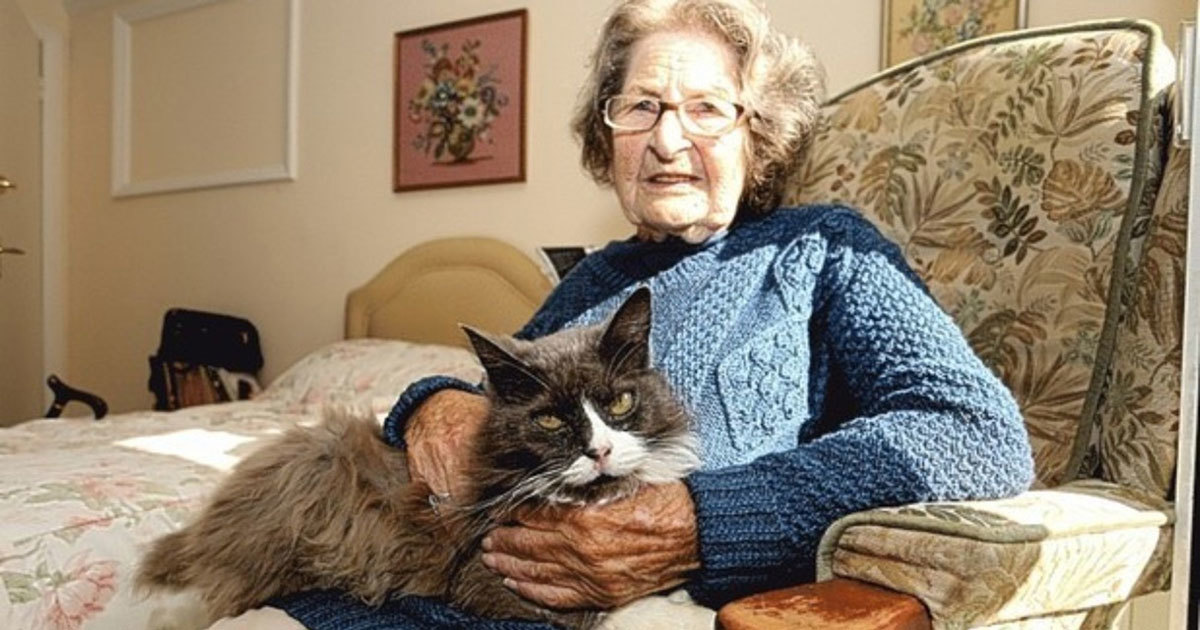 The bond between pets and their owners isn’t easily broken. And this story of loyalty between a cat named Cleo and her mom, Nancy, is a testament to how strong that love can be. A few months ago, Nancy Cowen was placed in a nursing home in Wescott, England. And unfortunately, she had to say goodbye to her fluffy, gray and white Cleo. But the cat didn’t seem content to stay with the neighbors…

According to staff at Bramley House, Nancy Cowen’s arrival to the nursing facility was followed shortly by another arrival of sorts.

Bramley House employee Laura Costello told the Dorking Advertiser, “About two weeks after Nancy moved in, this cat just started turning up and sleeping on the benches outside the home. It was very strange.”

The staff took a liking to the cat and made sure she was properly cared for.

“She’d been sort of hanging around, and the care staff started feeding her, obviously, because she’s so cute,” caregiver Leslie Thomas told The Dodo.

Then one day, Nancy saw the cat in the garden and mentioned to a staff member that it looked strikingly similar to the cat she had to leave behind.

Costello said, “One of the other carers picked her up one day and Nancy said, “That cat looks like my cat.”

Nancy can’t see well, but she said that her cat, Cleo, was in a car accident a few years ago and lost part of her tail.

The next time one of Nancy’s nurses saw the cat, she picked it up and took a look at her tail. And sure enough, her tail was missing a chunk.

“That’s when we realized that it was Cleo,” said Thomas.

How Cleo arrived at the nursing facility remains a mystery.

“I think it is just amazing that Cleo found Nancy. Obviously, Cleo knew Nancy was here, but nobody knew that it was her cat. Very strange. I don’t know how Cleo found her. It still baffles me. It’s really, really weird,” said Costello.

Now that the pair has been reunited, there are no plans to separate them again. And it just goes to show you that the bond between pets and their owners is truly unbreakable.

Isn’t it wonderful to hear stories like this in an otherwise tough, cold world? Share please this story with your friends so they can also enjoy this fantastic story!