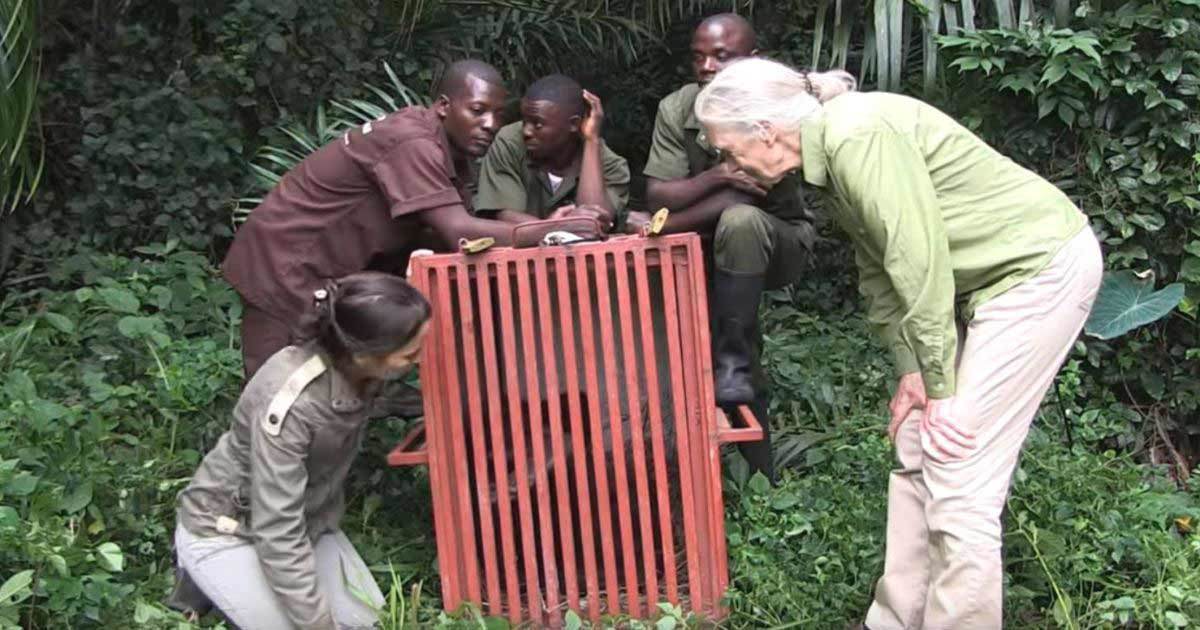 She had been abducted by poachers, was seriously ill and had lost a lot of weight.

Her name, which means “near death,” simply summarized her situation at the time.

But one day, a new group of people entered Wounda’s life… and after that, everything changed.

Animal lover Jane Goodall and her team work to save and care for chimpanzees in Congo so they can have a second chance in life in their natural habitat out in the wilderness.

One day, they crossed paths with Wounda, a chimpanzee who had been living in captivity ever since thieves had ripped her out of her mother’s arms.

The poor chimpanzee was in a very bad state and she probably would not have lived for much longer if Jane and her friends had not come to her rescue.

Although Wounda seemed to be scarred for life and generally afraid of the world, Jane and her team did their best to heal her. One woman in particular, Rebecca, refused to give up and built a strong connection with the chimp.

Day in and day out, they gave Wounda extraordinary care with lots of love and affection — until the chimpanzee was finally strong enough to be released out into the open.

They decided to transport Wounda to the “paradise island” and sanctuary Tchindzoulou Island in Congo, where she would have the opportunity to live exactly the way she deserved to live.

“This is a really exciting moment for me,” Jane says. “Here’s Wounda, and she nearly died but thanks to Rebecca she came back from the dead almost.”

And it seemed that Wounda is forever grateful to her rescuers.

Just before she was released, the chimpanzee said goodbye — with a gesture that will make tears run down your face.

The pictures speak for themselves.

After stepping out of the cage and having had a quick look around, Wounda turned rapidly toward Jane… and gave her a warm and long hug.

It’s pretty clear that Wounda knew exactly who and what she had to thank for everything.

Then off she went and disappeared into the jungle, maybe for good.

Thanks to Jane and her team, the chimpanzee had escaped a life of captivity — and now she was ready to turn a new page and start fresh — in the wilderness.

“Now she has a will to live and here she is about to come out into this paradise,” Jane says. “She is the 15th chimpanzee to get her freedom here and we hope ultimately to have about 60 on the island.”

Don’t miss the beautiful moment when Wounda is finally relseased shown in the clip below.

This was the most moving thing I’ve seen in a very long time! Luckily, there are wonderful people out there are who do everything in their power to help our beloved animals.