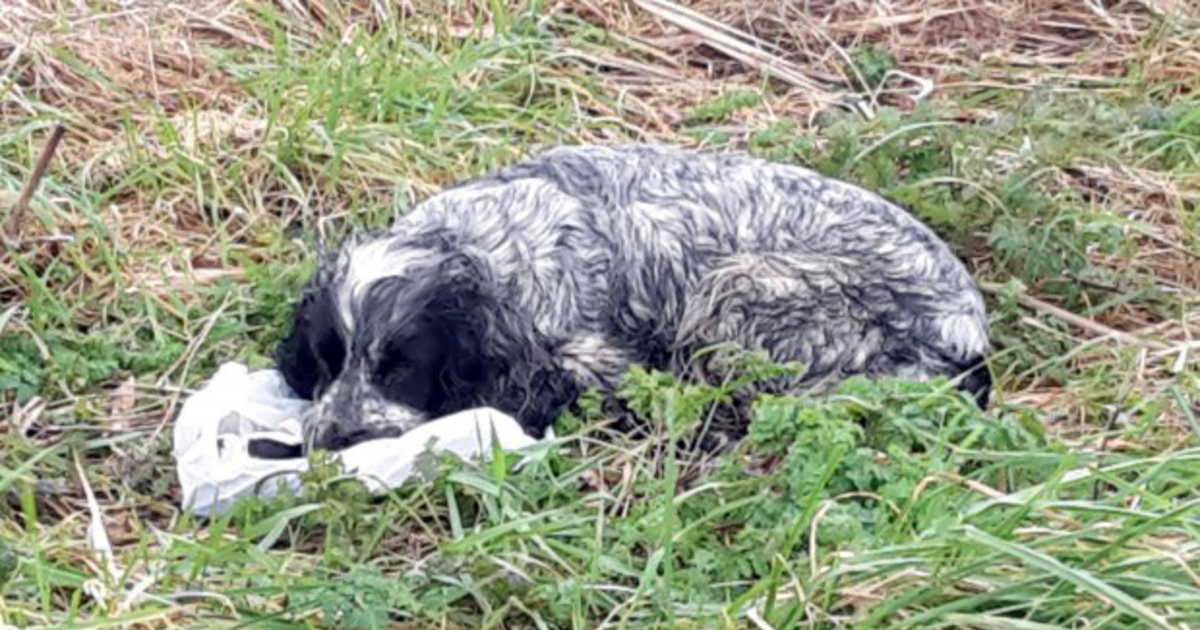 When 58-year-old Paul Skinner was cycling with a friend, he saw something from the corner of his eyes that had him immediately slam on his breaks.

Something was moving in a ditch.

As he approached, he discovered a tired and almost lifeless cocker spaniel that had clearly been abandoned.

The dog also had a plastic bag in his mouth — and when Paul realized what was inside, the hair on his spine began to rise.

“I was out cycling with my friend at the time. We spotted on the verge something that looked like a dead bird, but as we passed it it moved,” Paul told British paper Metro.

The dog, obviously deserted, was discovered in Lincolnshire, England.

“The dog was on its own, sitting licking the contents of a fish and chips carrier bag,” Paul adds.

Paul jumped off his bike and approached the dog. He could see no owners nearby.

That’s when he discovered the bag she held in her mouth.

Paul bent over the bag to see what was inside.

“The bag contained four dead pups. It was heartbreaking. She had tears in her eyes. I could not believe anybody could be so devoid of humanity to do something like this,” he says.

Paul immediately contacted an animal rescue group and and a local animal shelter.

Volunteers from the animal shelter soon arrived and tried to rescue the puppies — but it was too late.

One veterinarian examined the puppies and assessed that they’d probably been born that same day.

It appeared they may have been alive when they were placed in the bag and were dumped in the ditch together with their mother.

“We don’t know whether the puppies were stillborn or whether they died because of the cold,” the police said. “We would like to thank the cyclist who found the dog and raised the alarm and to Fen Bank Greyhound Sanctuary who got her to the vets.”

A microchip was found on the mamma dog but could only be traced back to the original breeder.

The momma dog was taken care of by the dog shelter and named Carly. Fortunately, she will never be treated badly again — and serve as an example of why we should never stop standing up against people who treat animals badly.

Carly clearly has 100 times more heart than her irresponsible owner. She refused to abandon her kids, even when they were no longer alive.

Her strong reaction and maternal instinct really shows that animals have the ability to feel just as much as we humans do.

I hope Carly has a long and happy life moving forward, and perhaps new puppies in the future! Like if you agree!