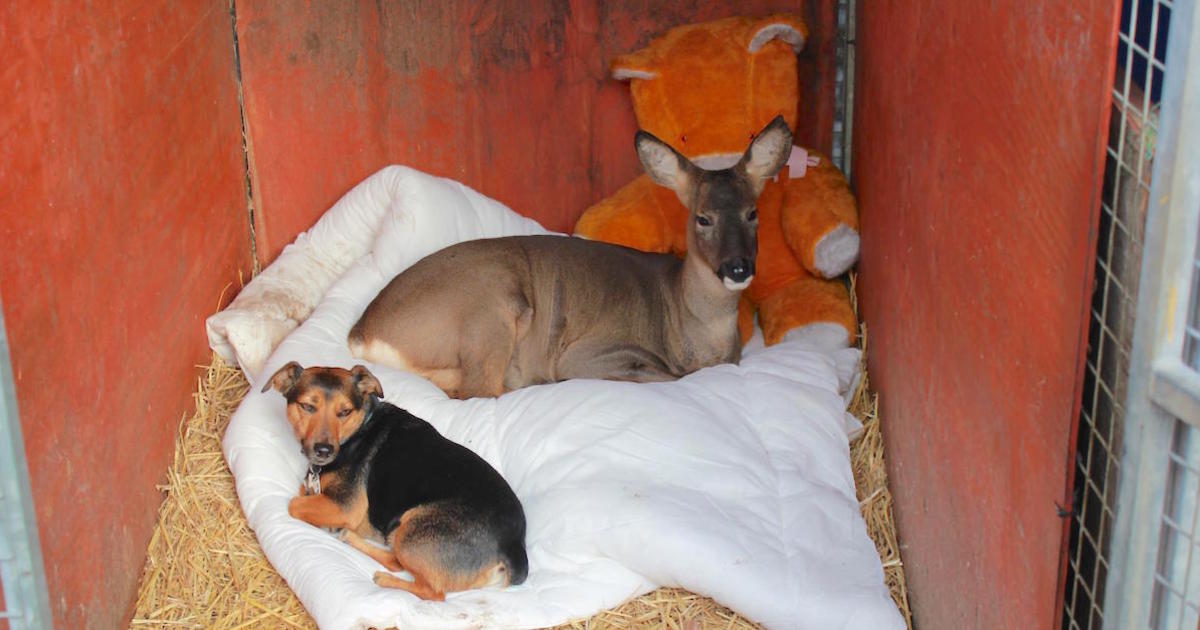 When Bramble was found, the roe deer was only a few weeks old. He was unconscious and brought to Nuneaton & Warwickshire Wildlife Sanctuary in England.

The sanctuary weren’t able to figure out why Bramble was in a coma, but they stayed by his side until he came out of it. After that, Geoff Grewcock, the head of the sanctuary, bottle-fed little Bramble around the clock until he got a little bigger. And now Geoff has welcomed Bramble into his home, where’s he’s become a beloved member of the family.

As with any wild animal he takes in, Geoff aimed to return Bramble to the wild. But Bramble proved to be a special case. He was too young when he was abandoned or lost contact with his mother, so he was never able to develop the natural instincts he’d need in the wild to fend for himself.

Instead, Geoff and his wife decided to raise Bramble at their home with their four dogs.

Bramble quickly made friends with the dogs, and all of their time together seems to have rubbed of on Bramble, who now seems to think he’s a dog, too.

And just like the rest of the four-legged members of the family, Bramble enjoys the domestic life.

He greet friends and neighbors at the door, and likes to relax on the couch.

Geoff has tried to release Bramble back into the wild a couple times, but Bramble seems more interested in foraging for food in the kitchen.

And Geoff has another reason why he’s happy to have Bramble stay with him and his family. Since deer are overpoulated in the U.K., there’s a yearly cull, which means that if Bramble was returned into the wild, he could be killed.

As Geoff put it to Caters News, “I wasn’t going to hand-rear him and then let him be culled in a deer park when he’s three. He’s one of the family.”

Share if you’re also happy to see Bramble enjoying his life as a dog!