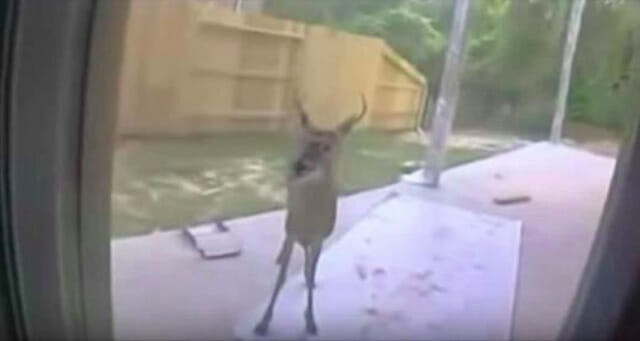 From time to time, rescue services such as the police or firefighters are called in to rescue a cat that climbed a little too high up of a tree — and won’t come down.

But when police officer Kevin Zieschang from the small town of Fulshear, Texas got a call, it was about something a bit more unusual.

The officer’s reaction is now being celebrated by animal lovers everywhere.

A group of construction workers were renovating a house when they received an unusual visit — a deer had suddenly sneaked into the home’s backyard. It appeared to have something stuck in its antlers, but they couldn’t quite make out what it was.

As the police arrived, the construction workers were already trying to free the deer using scissors.

Together, their efforts were successful and the deer was now liberated. The group of men then tried to spook the deer back out into the woods where it belonged.

But this deer was quite the character, and refused to leave — choosing instead to remain by its liberators’ sides.

The deer eventually left — but two days later, it was back at the house, reports news agency AP. As a local news crew was on site covering the story, the deer suddenly appeared out back!

It would appear that it missed its new friends and wanted to show its gratitude again. Aren’t animals simply remarkable?

See the video below.

The deer has since been moved to an animal sanctuary where it is doing well. Please share if this story warmed your heart, too!