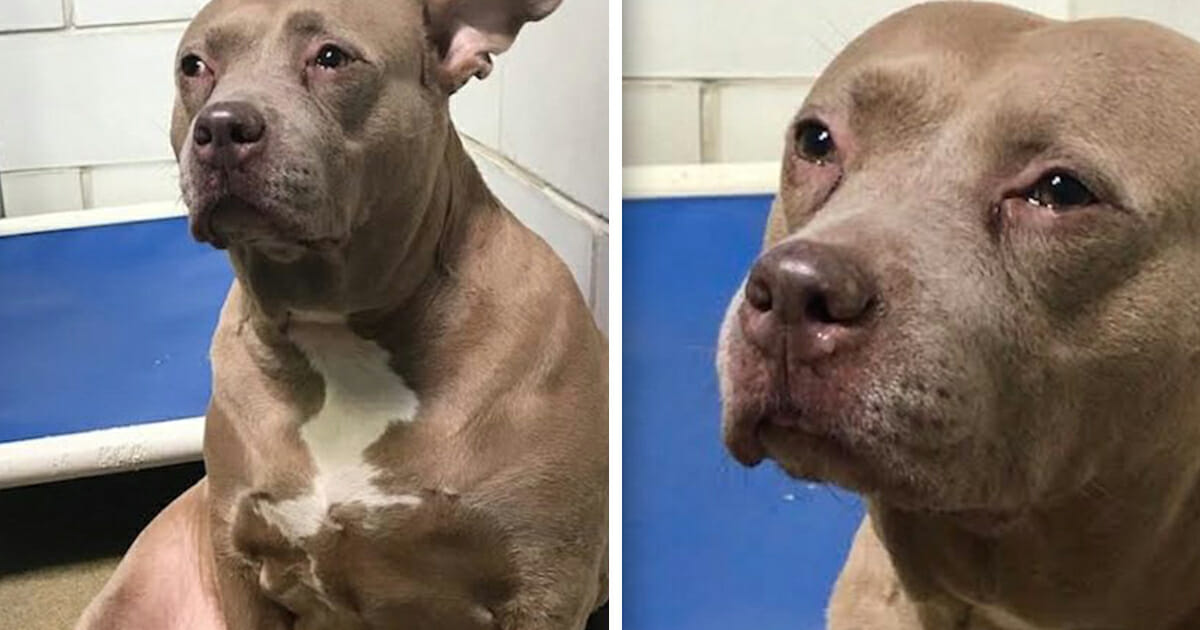 Watching an animal that’s been betrayed and hurt by those it trusts most in the world is a truly horrible thing.

Sadly, animal neglect and cruelty takes place all around the world every day, and thousands are dumped at shelters waiting for someone to give them the second chance they deserve in life.

The Charlotte Mecklenburg Animal Care & Control (CMACC) in North Carolina is one such shelter, and it’s one that Sarah Sleime visits often as a volunteer. As a result, she’s used to seeing despondent, broken animals waiting for their forever home.

Even she, however, was rocked to her very core when she met Cinnamon, a Pit Bull who looked to have tears in her eyes whenever Sarah walked past.

What she would come to learn about Cinnamon’s past, though, would push her over the edge …

It transpired that Cinnamon was 7-years-old, and it seemed as though she’d been used by her former owners as a breeding dog.

In a post on Facebook, Sarah wrote: “Someone dumped this poor mama at the shelter, minus her babies. Every time I stopped to talk to her and say I was sorry her eyes would fill with tears (check out reaction at -:13). Heartbreaking!!”

Sarah soon determined that she had to do something, so she uploaded a video on Cinnamon in the hope of raising awareness of her plight.

Shortly after her video was uploaded it became a viral sensation. Numerous people wanted to adopt Cinnamon, and there was no end to the people wishing her well.

Sarah was especially happy when a friend of hers revealed that she wanted to give the dog her forever home.

Megan Shelton told The Dodo: “I have a special place in my heart for pit bulls. I think they’re a very misunderstood dog and a misunderstood breed.

“And when I saw her in that video, literally crying in a cage, I cried. My kids cried. I showed my husband, and he said we could go look at her tomorrow.”

Cinnamon took no time at all in making friends with Megan. In fact, her tail wouldn’t stop wagging when they met.

Dogs are sympathetic creatures who share our joys and sorrows but emotional crying is usually an action associated with humans.

Sarah caught the encounter on camera and uploaded that, too, to her Facebook.

Gone were Cinnamon’s tears, replaced by an excitement that couldn’t be contained.

The Shelton family already had a three-year-old Pit Bull named Blu, and so the only hurdle left was seeing if the two dogs would be able to accept one another and co-exist.

To tie a pretty bow on the whole thing, Blu and Cinnamon – who the Sheltons would later name Rosie – got on like a house on fire. Rosie got a loving family, and the Sheltons were gifted a special dog indeed.

What a fantastic story. We’re so happy Cinnamon/Rosie was given the second chance she was so desperate for!

Sleieme and everyone touched by Cinnamon couldn’t be happier it all turned out well!

All dogs can be loving companions if given the right environment to grow. It’s our opinion that no dog should ever be discarded simply because they’re not convenient anymore.

Share this article on Facebook with all your friends and family if you also want to show your support for the rights of our four-legged friends!