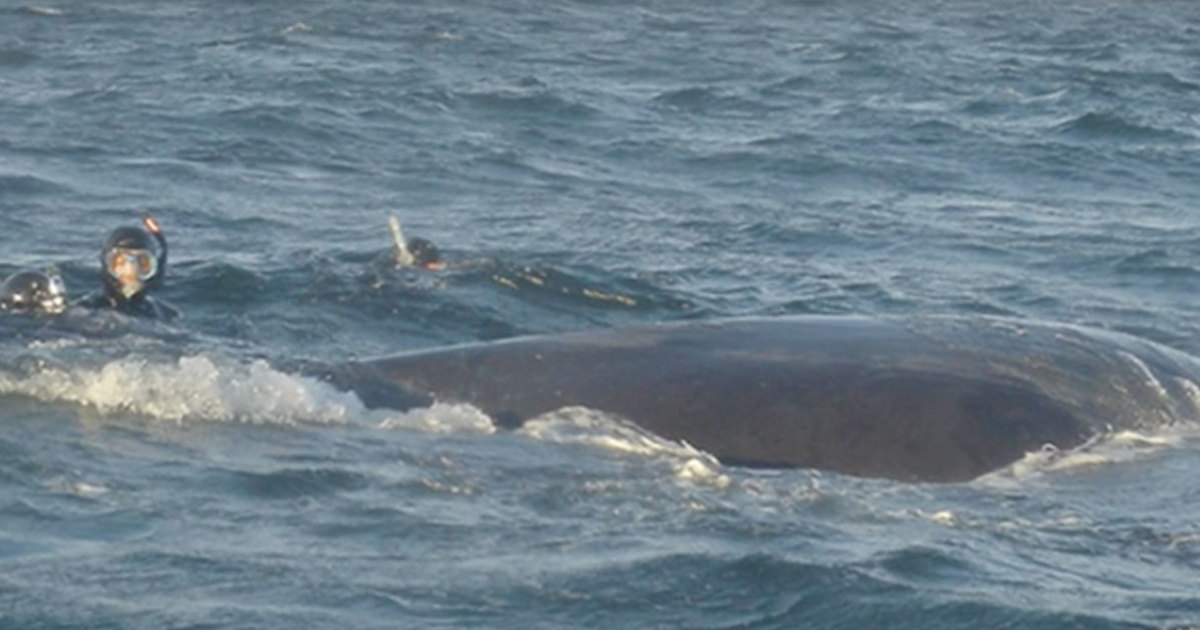 Professional diver James Moskito was working with a team of volunteers by the Farallon Islands off the coast of San Francisco.

He spotted a humpback whale acting strangely at the surface of the water.

The more James watched the whale, the clearer it became that something was wrong. Usually, whales only come up for a few seconds to get some air.

“The whale came up on a breath, came up, put its eye above the surface… looked at me. I could tell it was looking at me and it just stayed there,” James said.

James decided to swim out to the whale.

He put his hand on the creature’s eye and calmly told it, “I’m here to help you. I’m not going to hurt you.”

James then swam around to the other side of the whale and was shocked by what he found.

There was a 3,000-pound anchor stuck to the whale’s tail.

James and the other brave divers worked tirelessly for hours to free the beautiful animal from the mile-long chain that was wrapped around it and dragging it down.

Finally, after much hard work, the team succeeded.

The whale started circling James, swimming figure eights around him.

Then it rubbed itself against him, as if to say thank you.

Watch the video to see what happened next:

According to Animal Planet, whales likely shut off half their brain at a time while they sleep so they’re still aware enough to breathe.

Isn’t it amazing to see the determination and hard work that these guys put into to saving this beautiful animal?

Some people might think it’s strange that James spoke with the whale. But whales have feelings and probably understand more than we know.

Researchers at the Mount Sinai School of Medicine in New York found that whales have the same specialized brain cells that are involved in processing emotions that are also found in humans and primates.

So we’re 100 percent sure that this humpback whale was very grateful for all the help it received. Please share this wonderful animal rescue if you agree!