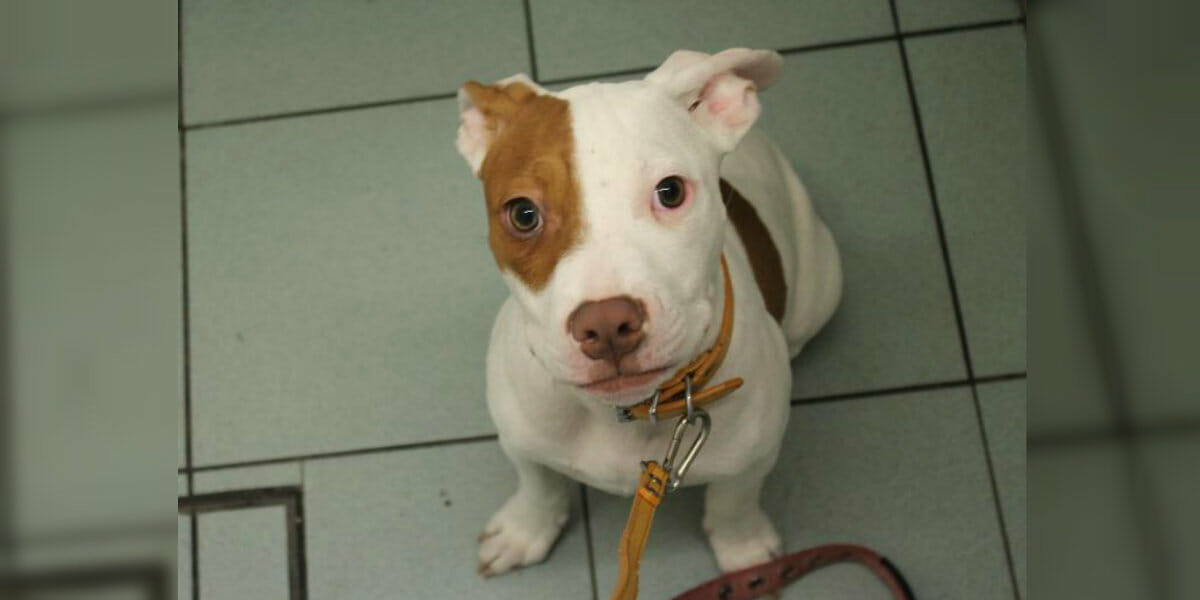 The first seven months of little Ivor’s life were full of confusion.

The poor puppy was shipped around a number of dog shelters and had five different owners in just one year.

Every time he began to settle in somewhere, he would be cast out. There was no family that wanted the dog. “There’s something wrong with him!”, “He can’t hear!” people claimed.

By the end of 2017, Ivor had once again entered the RSPCA’s system for sheltering animals; for the fifth time he had lost his family.

Everyone who had owned Ivor said that he was a loud dog who wouldn’t stop barking.

Soon the shelter decided to investigate more directly why nobody wanted Ivor… the reason is truly heartbreaking!

Several families had decided to pass on Ivor, meaning the dog spent much of his early months in and out of the dog shelter.

After the fifth time of being returned – again, by a family who couldn’t understand why the dog behaved so strangely – staff at the RSPCA began to grow suspicious.

It’s often not easy for a breeder with several puppies to notice if any one of them is deaf.

But when volunteers at Ivor’s dog shelter tested his hearing, they realised straight away why he was having problems fitting in a normal home – Ivor couldn’t hear anything.

None of the previous owners had known Ivor was deaf, but fortunately the animal lovers at the shelter immediately began to learn sign language to communicate with the pup.

The volunteers first taught him to come close by making him touch the palm of their outstretched hand. They then introduced him to other basic commands.

Shortly afterwards, Ivor was once again put up for adoption. There he met a girl who would eventually become his loving owner: Ellie Bromilow.

There was an instant connection forged between the two, and it didn’t take long for Ellie to convince her family to adopt Ivor into their home.

The RSPCA had already taught Ivor many commands, but Ellie was keen to push his education further. She wanted to help Ivor discover everything he had missed out on at other homes.

“He’d already learned the sign command for “sit” and “come” from the staff at the RSPCA centre, but now he knows lots more like “lie down”, “stay”, “all gone” and he’s learning “roll over”,” Ellie said, as per British newspaper Metro.

It turns out Ivor is a very smart dog – he just needed to learn about the world in his own unique way.

Because of his disability, Ivor’s sense of smell, sight and touch are greatly enhanced.

Ivor especially likes to use his sharp nose to chase things that his owner has hidden around the house.

“While other dogs may miss things, my eyes are trained to observe everything. Even when I sleep, I see all, I feel the vibration of doors and footsteps and can sniff a piece of ham from a mile away,” it says on Ivor’s Facebook page.

And another thing Ivor excels in? Sleeping.

Apparently, he just loves to creep into bed and relax after a long day’s adventures.

Yes, we agree, he seems to be a wonderful dog.

When not sleeping or enjoying walks with Ellie, Ivor simply loves communicating with her – something he never had the chance to do at the other homes.

He watches everything and knows when people are trying to speak with him.

“Having a deaf dog is just like having a hearing dog. We still speak to him as we sign and I chat to him a lot – even though he can’t hear a word,” Ellie explains.

Living with a deaf dog can pose problems you wouldn’t normally have with a dog. Fortunately, Ellie seems to have all the tools necessary to take care of Ivor.

We wish this duo all the best of luck in the future and thank all involved that Ivor was able to finally find his way to a good home.