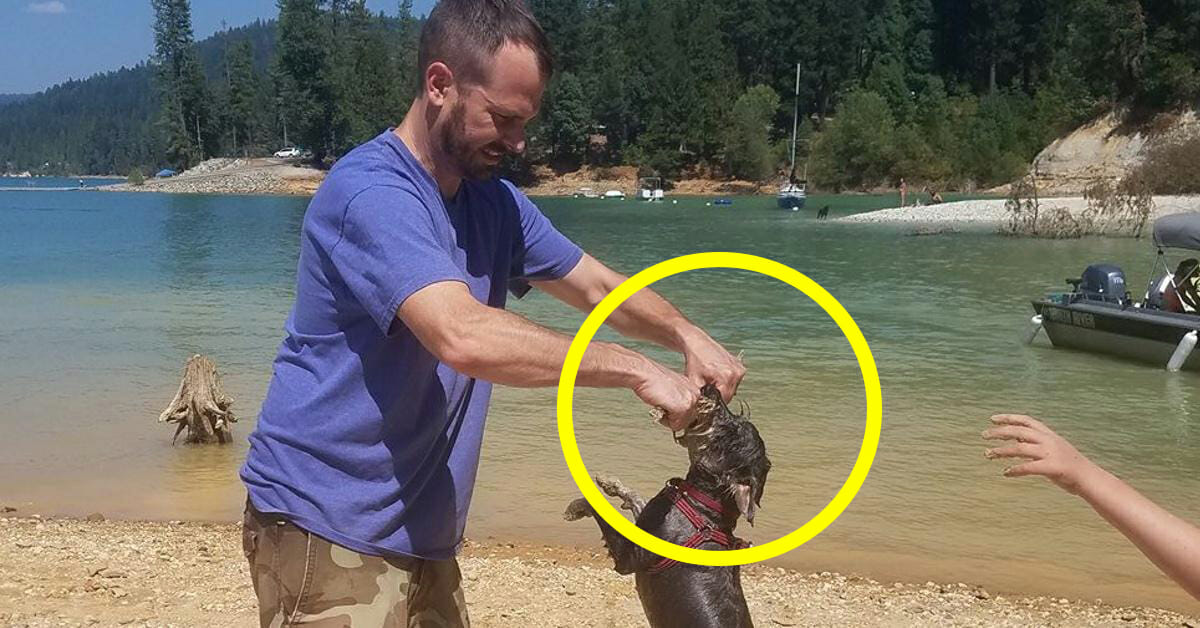 In 2017, Jen Walsh spent a summer day at the lake with her family.

As always, her two-year-old Schnauzer, Hanz, went along with them. And, as always, the family and the dog played together happily.

Jen would throw a stick or ball into the water, while Hanz would rush out, retrieve it and then bring it back.

They repeated this over and over. Each time, Hanz came back ready for more; a bundle of energy and joy.

After around an hour and a half, Hanz had been in and out of the lake more than twenty times to collect balls and sticks. He seemed content, but no one could have known the danger he was in.

Just a short while later, Jen realised something was wrong with her dog. The last time he returned from the lake, he didn’t shake off the water as he usually did.

Shortly afterwards, he slumped to the ground, looking “worn out”.

With the dog’s condition deteriorating quickly, the family decided to rush him to the vet. On the journey he worsened further, and Jen knew they had to do something if they were to keep him alive.

When Jennifer finally arrived at the vets, the dog was immediately hurried into care. Sadly, it was without success. The little Schnauzer had died.

Only after he had passed, did Jen learn what had happened to her best friend: He had suffered from water intoxication, also known as hyponatraemia.

Tragically, this kills thousands of dogs every year. It might not be very common, but it’s good to know what can happen and in what situations the risk is most extreme.

The condition is brought on by excessive fluid intake, which causes the body to lose sodium.

As a result, the body’s cells begin to fill with water and swell. If the cells in the brain swell, it can affect the central nervous system, which can be fatal.

It’s important to remember that dogs can’t always determine when they need to stop drinking. This can occur when they’re playing in the ocean, a pool or drinking from a water hose.

The first symptoms of water intoxication can be weakness, dizziness, loss of appetite or nausea and vomiting.

Symptoms of water intoxication can include:

Smaller dogs that are high energy and love to play in the water are at higher risk, because they can absorb a lot of fluid in relation to their body size.

What to do if it occurs

It’s always important as an owner to keep an eye on your dog if they love playing in the water. Some dogs love to throw themselves into waves or completely submerge themselves, which puts them at added risk of taking in too much water.

If you suspect your dog may be suffering from water intoxication, you should always contact a veterinarian directly.

The Walsh family didn’t know that Hanz was in danger, and will certainly regret what happened forevermore.

“This will never happen to us again, but I wish we had been warned of the possibility. It would have saved Hanz’ life. He was the best dog EVER,” Jen wrote on her Facebook page.

Sadly, dogs across the nation continues to die from toxic algae exposure after swimming in lakes.

Just a few weeks ago there was new reports of dogs that died after bathing in lakes with toxic algae.

Two dog owners in North Carolina were left devastated after their three dogs died within hours of exposure to a toxin from a blue-green algae bloom in a local pond.

Melissa Martin and Denise Mintz took their dogs to a pond in Wilmington, North Carolina, to play and swim Thursday night, August 8.

But when day came home, one of the pups started acting strangely – so they took her to the animal hospital.

Tragically, the other dogs soon started seizing and showing signs of liver failure.

Melissa Martin and Denise Mintz also want to warn other pet owners about the dangers of toxins from algal blooms.

“People need to know about this,” Martin told WECT.

“Like I said, if we had any clue this was ever a thing they would have never come. I had no idea. And once we got to the emergency vet last night, they also weren’t sure.”

The Walsh family are aiming to save more dogs and their owners from this terrible fate. They want to do this by spreading the story of Hanz.

Help us to spread the message further by SHARING this post!