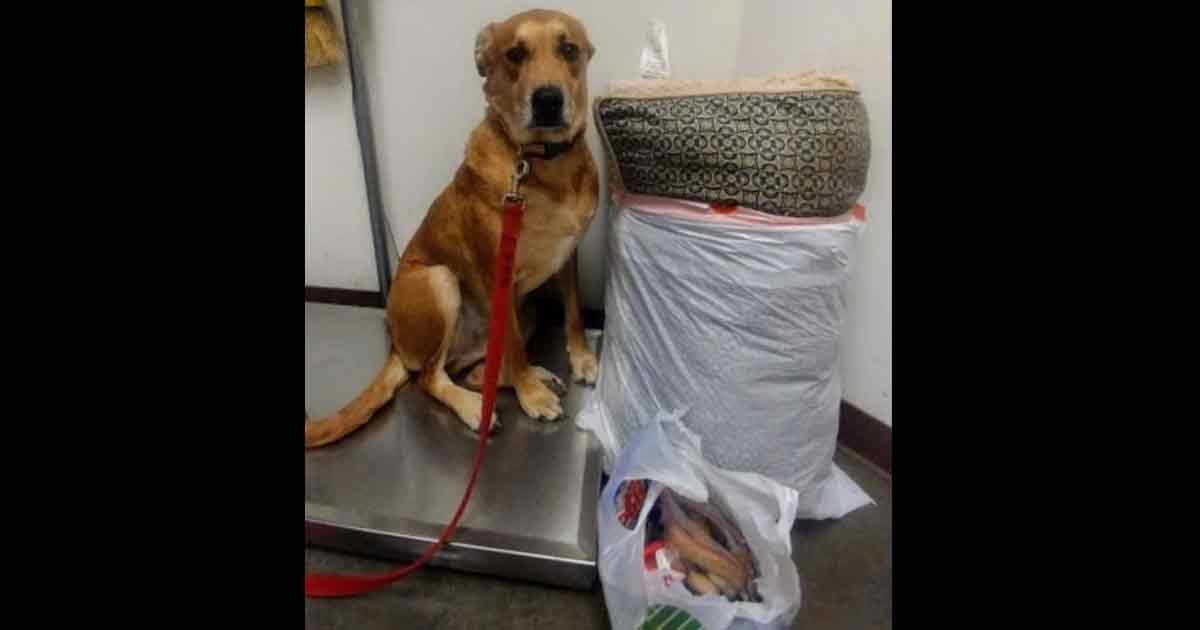 There are plenty of people the world over who dream of getting a dog.

Of course, it’s not difficult to see why. Dogs have earned their moniker as man’s best friend, and can be truly amazing companions if given a good home to thrive in.

Sadly, there’s one thing some people simply fail to grasp: Dogs are family members, and must not be discarded simply because of a change of circumstance in the home.

One dog, named Wall-E, knows all about how painful that can be …

Wall-E was adopted from the Maricopa County Animal Care and Control shelter in 2015. He was moved to a new home, one where he was overwhelmed with love and care. In short, he was given the life all dogs deserve.

Unfortunately, the dream would soon end. One day in October last year, Wall-E watched as all of his toys and bedding were packed into two plastic bags.

The only thing Wall-E knew for sure was that he was alone. He became frightened and destitute.

Wall-E’s family could no longer take care of him as they once had, so gave him up to the shelter.

“He was surrendered by his family because they did not have enough time for him,” Jordan Bader, who runs a Facebook page for the adoptable dogs of MCACC, said to The Dodo.

“He was very scared. In his kennel, he would bark and bark.”

The shelter where Wall-E had ended up was cold and strange to him. He also went without his toys, for there was no room for them.

Wall-E didn’t know why his family had abandoned him. Confused and lonely, he quickly fell into depression.

The dog sat alone in his cage, and refused to respond to people who tried to cheer him up. When people came looking to adopt, they passed Wall-E by, not giving him so much as a cursory glance.

The poor pup went two months without getting a new family. Worse, the shelter he was at had no choice but to euthanize dogs when they ran out of space, because they have to legally take every dog that comes in.

Staff at the shelter knew Wall-E for what he really was, however, and so were keen to see him passed to a loving, caring family.

One day, they hatched an idea. When Wall-E had first been left at the shelter, with all his toys and belongings, they had taken a picture of him. They knew the image was enough to turn heads, and so decided to try and use it to tell his story on Facebook.

Here is Wall-E when he was getting surrendered by his owner ? They brought all his stuff.. like it was gonna be there…

The results were more than they could have hoped for.

“We knew this picture would be heartbreaking and would get a lot of attention, but we had no idea it would blow up like it did. We had so many people interested in him,” Jordan Bader told The Dodo.

One of the people who saw the photo and knew she couldn’t ignore it was Lynn Lee. She went directly to the animal shelter to meet Wall-E, and the two got on like a house on fire.

At last, Wall-E was given a forever home that he can grow old in.

As you can see, he seems to like it!

We think it’s so wonderful that Wall-E was given a second chance in life. We hope he has the peace of mind that all dogs deserve.

Just look how happy he is!

Animals simply can’t be treated like material objects, ones that you can throw away when you’re bored of them. Dogs are family members, and should be afforded the respect that comes with it.

Please share this article to remind people of the salient facts when it comes to owning a pet. No matter how many times we say it, some people continue to ignore!