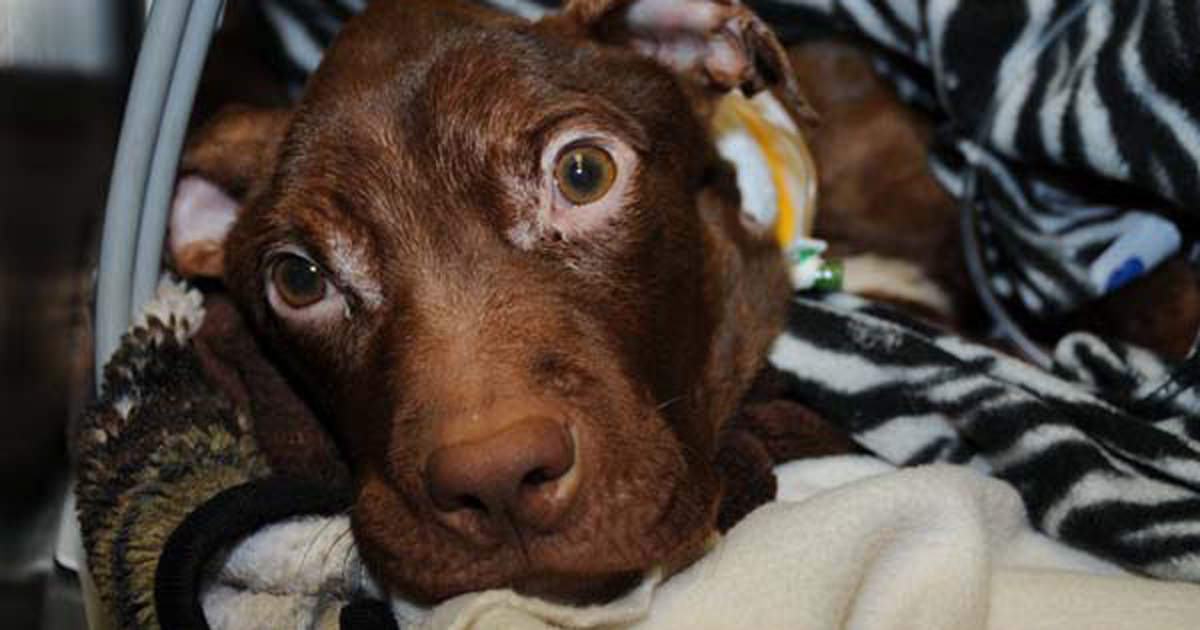 Sometimes, I don’t understand people. Why would anyone want to hurt an innocent animal?

When a dog named Patrick was found, he was barely alive and had almost given up on life. Not only had his owner abused and neglected Patrick, he was also thrown down the garbage chute of the building in Newark, New Jersey where he lived.

Luckily, someone found Patrick before it was too late—and now he’s like a whole a new dog!

Scroll down to read Patrick’s story of recovery and transformation.

Patrick’s owner tied him up in a plastic bag and threw him down a garbage chute as if he were trash.

Patrick was so skinny that it’s hard to believe that he was alive. He didn’t have long to live, either—because trash doesn’t stay at the bottom of the shoot very long before it’s compacted and taken away.

But luckily, a member of the building’s maintenance team found Patrick before it was too late.

The caretaker got a shock when he saw a dog lying in the garbage pile. It was a miracle that the dog even survived the fall from the chute, considering the shape he was in.

There was no time to lose. The caretaker gently lifted Patrick and brought him to a nearby animal hospital.

At first, it was unclear whether Patrick would survive the night. He weighed only about 17 pounds (8kg) and could barely stand. But as if by magic, he survived.

Maybe Patrick realized he was finally in safe hands and gained the courage to fight on.

Day by day, Patrick grew stronger. Every day he lived was a win, and the staff at the animal hospital cheered him on.

Soon, Patrick’s life wasn’t danger anymore, and the vets could breathe a sigh of relief.

Patrick started gaining weight. He loved the warmth and attention of the people at the animal hospital. He probably didn’t get much love from his former owners.

Patrick’s life started looking the way a dog’s life should look—and he began to look like a real dog.

One day, Patrick began playing again. He could finally relax and start his new life for real.

Now, it was time for Patrick to move into a new home

An administrator at the animal hospital named Patricia Smillie-Scavelli fell in love with Patrick. She decided to adopt him, and Patrick also thought it was a fantastic idea.

It took a year for Patrick to completely recover from all of the terrible things that his previous owner had exposed him to. But now, he’s feeling good and loves his new owner.

I really don’t understand how anyone could have treated an animal so badly. But I’m so happy to see Patrick get the life he deserves!

Were you also happy to see how well Patrick is doing now? Please share his story with your friends!