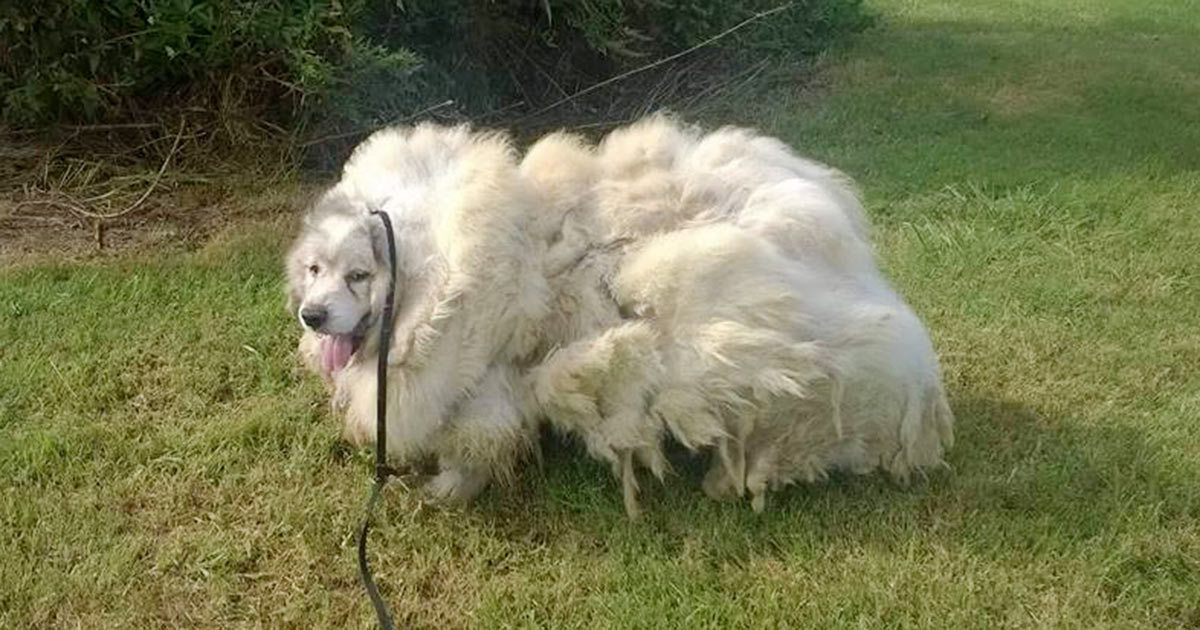 Dog Lazarus had lived in a barn in his life. For six years he sat trapped, with no opportunity to even exercise. He lived as if he were cattle, and had to live around his own feces. His fur was extremely unkempt and had never been trimmed – he did not even look like a dog anymore.

But under all that fur was actually a wonderful little doggy, who just needed a little help to arrive. And at long last, it came.

It was a neighbor who eventually blew the whistle about Lazarus, whose owner had kept him in his barn for years. The owner was terminally ill and Lazarus needed a new home with a suitable owner.

Lazarus was picked up by Jessica Kincheloe, a dog groomer, and she immediately took care of his thick coat of fur.

It was no easy task. Lazarus’ fur weighed 35 lbs.

When Jessica first approached him with her trimmer, Lazarus was quite skeptical and afraid – but as soon as he felt that first coat of thick hair come off from around his neck, he felt much better.

“He calmed down and seemed to realize it was making him feel better,” Jessica told The Dodo.

When the fur was finally gone, a whole new world opened up for Lazarus.

He could walk and even run. This had been impossible previously with his heavy coat of fur.

He was also introduced to another wonderful and favorite dog wish – human closeness.

“He was OK with the human touch but didn’t seem familiar to it. He warmed up to us really quick. Especially after offering treats,” says Jessica.

Lazarus was cared for by organization Big Fluffy Dog Rescue, which is now seeking a forever home for him.

Meanwhile, Lazarus is living in a foster home in Virginia, where he is slowly but surely learning what a normal dog’s life is like. And enjoying every moment.

It will surely take some time before Lazarus learns everything, but in just a week, he has already made great progress. For example, he learned what a really good piece of meat tastes like, how to walk without 35 lbs of fur on his body, and how exciting rides in cars are.

He still needs to work on goign to the bathroom outdoors – difficult as he’d spent so many years simply going in the barn where he lived. But we have full faith in Lazarus!

Good luck in the future dear Lazarus. I hope you find a wonderful forever-home soon!