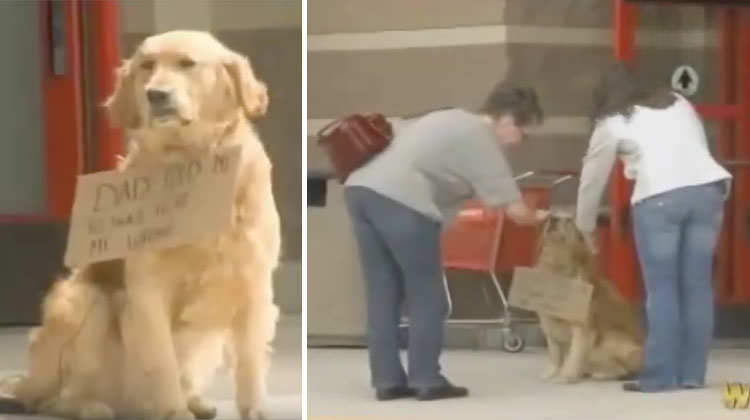 From time to time you read about irresponsible animal owners who treat their pets terribly. I have never seen it with my own eyes, but have read too many stories about dogs that have been dumped by owners who just left a note with the poor pup.
I just don’t understand what goes through these peoples’ heads when they do this.

That was exactly what I thought this story was about – but it turned out I was wrong! This cute golden retriever also had a note – but it didn’t mean he needed a new owner…
Share
Tweet

In the clip below we see people going in and out of a store in South-West Pennsylvania. It seems some people thought this little fella was just another deserted dog sitting at the roadside with a note around its neck. But as it turns out, they thought wrong.

When they look closer, everything becomes clear: this is a beloved and very well looked after little four-legged tyke.

“Dad told me to wait here. Me waiting” reads the note.

Until dad returns, the pup sits obediently outside the store and waits while people pet him.

“Everybody wants to take him home. I just find that amazing, because four weeks ago nobody wanted him,” owner Steve says in a news report..

Watch below to see Steve and Jackson show how patiently Jackson waits outside the store:

Make sure you share this story if you believe that dogs of any age can learn new tricks!