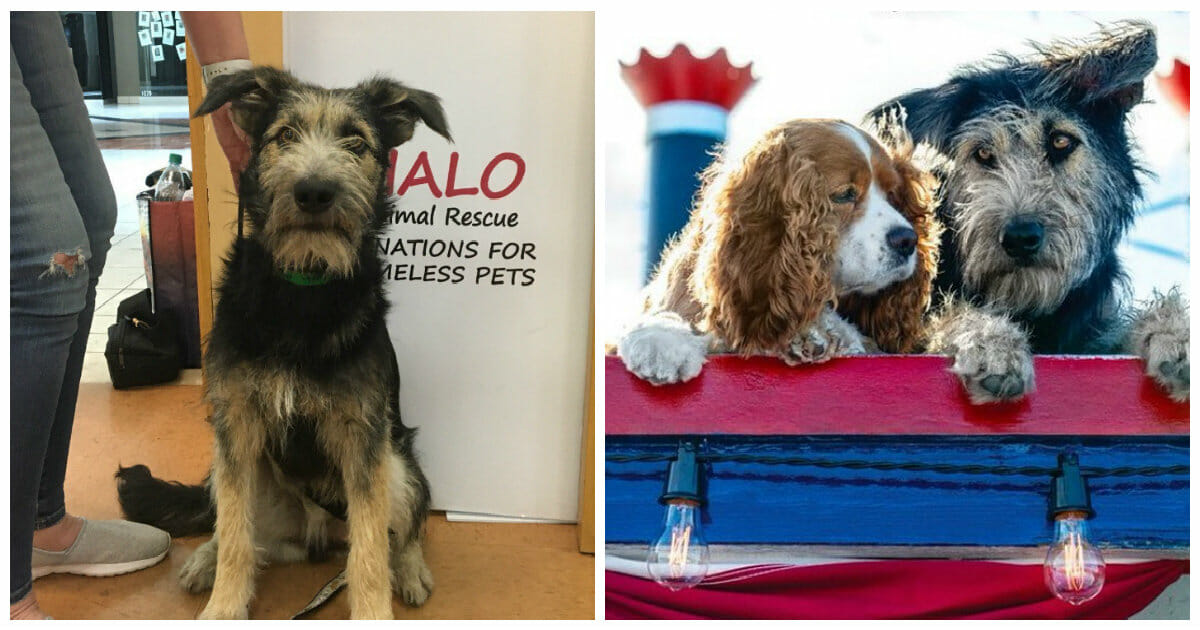 Fans are excited for Disney’s next reimagining of one of their classic films: a remake of Lady and the Tramp. In the same vein of recent hits like Aladdin and The Lion King, the company is revisiting the story as a live-action film instead of animated.

But unlike The Lion King, where the animals are CGI, the characters in Lady and the Tramp will be played by real dogs.

Even better, one of the leads was rescued from an animal shelter. It’s a classic Hollywood rags-to-riches story.

Ever since Disney announced the film—now streaming on the newly-launched Disney+ streaming service—fans have been wondering who will be cast as the iconic duo.

In 2018, it was revealed that the canines would be voiced by stars like Justin Theroux and Tessa Thompson, who are playing the respective title roles, along with Sam Elliot as Trusty.

But fans were even more excited when they revealed the dogs themselves.

People unveiled the dog actors in August, and they are impressively faithful to the look of the animated characters of the 1955 original. Lady is played by a Cocker Spaniel named Rose.

But most notable is the casting for Tramp. The male lead is portrayed by a rescue dog named Monte, a two-year-old terrier mix who was saved from a kill-shelter in New Mexico last April by HALO Animal Rescue.

Shelter dog Monte really looks like Tramp from Disney's Classic "Lady and the Tramp"-Rescued by @HALORSQ Monty was adopted by a family in California and now he's starring in the remake live-action film. Movie opens this November #LadyandtheTramp #HaloAnimalRescue @FOX10Phoenix pic.twitter.com/tdYTAZo5Wm

While Monte was part of a group of about 50 rescues, he was still a standout. “His notes said he was super friendly, greets people right away, gives kisses, loves attention, he knows how to sit, and walks well on a leash,” HALO president and CEO Heather Allen told Las Cruces Sun News.

In other words, he was born to be a star, and his chance came when animal trainers came scouting for talent: “We knew that they were potentially seeking a dog for Hollywood but we didn’t know why,” Allen said. “It was top secret, they were looking for a particular look and we weren’t sure for what.”

CUTENESS ALERT: Check out this first look at the live-action Lady and the Tramp on the cover of our latest issue of “Disney twenty-three” 🍝 Check out our Story to find out more about all the #DisneyPlus previews in the issue.

Of course, the project turned out to be Lady and the Tramp, and while Monte was thinner than he appears in the film, everyone knew he was perfect for the part of the romantic, streetwise Tramp.

“He’s so handsome and had the scruff factor that Tramp has from the original movie,” Allen told the Las Cruces Sun. “Plus Monte has such a unique look as a mixed breed. He’s not going to look like any other dog that Lady would run into, especially as she’s a pure breed.”

“It’s so cool to see a shelter dog, especially a mixed breed, in the movie. The mutts are going to shine on the screen,” says Allen. “Monte’s not just a movie star, he’s going to help mutts all over the world just by being in the movie.”

We have a celebrity dog in our midst! Check out Monte, he was adopted last year from HALO and originally came from Las…

According to People, Monte was adopted by one of the film’s trainers, Mark Forbes. Allen says the shelter gets photos of him in his happy new home.

With Monte starring in this highly-anticipated movie, his rescuers hope that he will be an inspiration to shelter dogs everywhere.

“It’s so cool to see a shelter dog, especially a mixed breed, in the movie. The mutts are going to shine on the screen,” Allen said. “Monte’s not just a movie star, he’s going to help mutts all over the world just by being in the movie.”

You can watch Monte’s big debut today on Disney+. We’ll be watching, just to see how these real-life dogs pulled off that iconic spaghetti kiss:

What an exciting opportunity for this rescue dog! Thank you to the people who saved him and gave him this chance. We can’t wait to see him on screen!