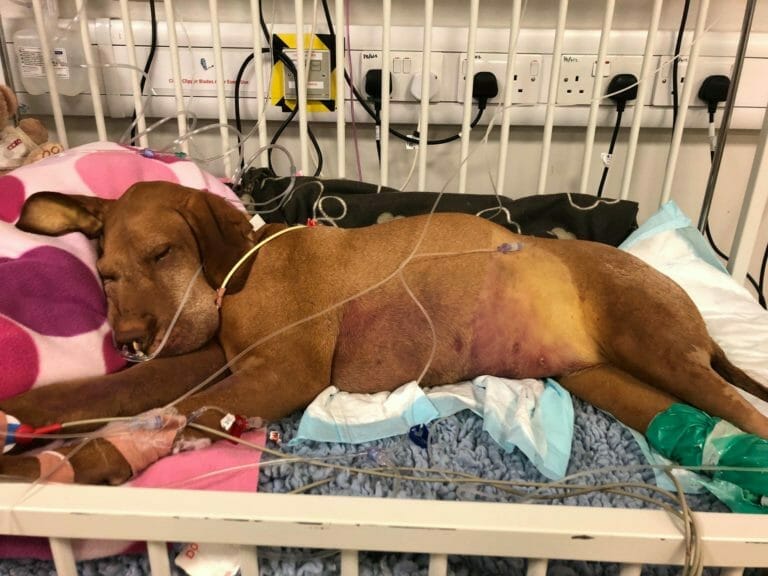 The only thing worse than losing your beloved pet is knowing that its death was preventable.

According to People’s magazine, this is the scenario experienced by dog owner Kate Chacksfield.

Despite being crushed by grief, she was forced to say goodbye to her dog Ruby – all the while living with the knowledge that her best friend needn’t have died.

Now, she’s using her story to try and warn other pet owners in the hope that the same thing never happens again.

Anyone who owns a dog will know how tempted our four-legged friends are by sweets, salt and fatty foods.

It’s common knowledge that chocolate is toxic to a dog, but what about when it comes to cakes and pastries?

Well, they can actually be fatal too – something that London-based Katy Chacksfield is now painfully aware of.

Like most dogs, Ruby was unable to resist the goodies that her owners baked.

The dog had previously eaten brownie cakes, but they didn’t make her sick. Although chocolate is usually toxic to dogs, Ruby escaped any sort of ill effects.

Despite the small amount of brownies she’d managed to eat, Ruby, of the Vizla breed, was in perfect health.

However, on this fateful day, Ruby consumed two whole brownies, and the Xylitol content made her sick within just 36 hours.

Xylitol is often used as a sweetener in chewing gum ands tablets, and has never been shown to be harmful to humans.

However, the substance is extremely toxic to dogs as they lack the cability to break it down. This, among other things, can cause a hypoglycaemic coma that can have fatal consequences, according to Blue Cross.

If Kate had known about the potential dangers of Xylitol, she would have rushed Ruby to the vet much earlier … and thereby may have been able to save the dog’s life.

Xylitol is often found in light products, as it isn’t calorie dense. Kate, who had previously struggled to lose pounds, had replaced plain sugar in the recipe when she made her brownies this time. The stand-in? Xylitol.

Had she known how toxic the substance was to dogs, she would never have had to say goodbye to her beloved pet, as she would have taken extreme caution.

Dogs that have ingested Xylitol can exhibit a number of symptoms.

The warning signs usually present themselves within an hour, but can take longer depending on the breed and amount consumed. As soon as Kate realized that her beloved pet was ill, she went with her Vizla to the vets. Unfortunately, it was already too late.

The damage had already been done, and Ruby’s condition deteriorated quickly thereafter.

For eight days Ruby suffered and struggled with the symptoms. Kate could only stand and watch on, left with a broken heart and a vet’s bill of around £10,000.

“I had no idea how serious eating natural sweeteners was for dogs, the photos of her on life support still make me cry,” Chacksfield told Caters News Agency.

Now Kate is aiming to raise awareness of the danger Xylitol presents for dogs. In sugar-free candy, the Xylitol content can be high. It might only take the equivalent of 2-4 pieces of chewing gum for your dog to be poisoned.

Symptoms often manifest themselves in vomiting, shaking and lethargy, whilst more serious cases can involve convulsions and loss of consciousness.

Had Kate known what she knows today, she wouldn’t have hesitated a second before rushing Ruby to the vets. Sadly, she never made the connection between the missing brownies and Ruby’s symptoms.

“I only made brownies with Xylitol in to reduce the amount of sugar I was eating,” the owner said.

Obviously, if you’re not aware of what’s making your pet sick it makes it harder for the vet to begin appropriate treatment.

It’s a known truth that dogs are famous for being voracious eaters who will ingest most things they can get their hands on.

“We just thought she may have eaten some by mistake in the park or something – it never crossed my mind to mention the brownies, ” she said.

Kate’s shown great strength of character to transform a personal tragedy into a potential lesson for other owners. She’s hoping to spread this subject far and wide, in the hope lives will be saved.

It’s a painful way to lose a pet. As kind and sweet as dogs are, they often can’t help themselves when it comes to sweet treats – they simply don’t know any better.

If you’re a pet owner, it’s wise to thoroughly educate yourself on everything that can be toxic to your animal. Be sure to leave a list with anyone who may be looking after your dog or cat.

“It takes just a quarter of a teaspoon of sweetener to harm a dog,” the owner added.

The potentially lethal ingredient is found in several sugar-free products, including chewing gum, candy and peanut butter. Always remember to read the label and make sure that a product contains nothing that can harm your dog before you let them eat it.

If you have even the slightest bit of doubt that your pet might have consumed something that’s making him/her ill, don’t hesitate. Take them directly to the vet to begin treatment. It’s always better to be safe than sorry.

We want to pass our deepest sympathies to Kate and Ruby – this is such a tragic accident that need never have happened.

The least we can do in Ruby’s memory is share this information amongst all animal lovers. Let’s make it so that everyone understands the risks … no dog should ever be affected by this again.

Hit the share button and help save a life.