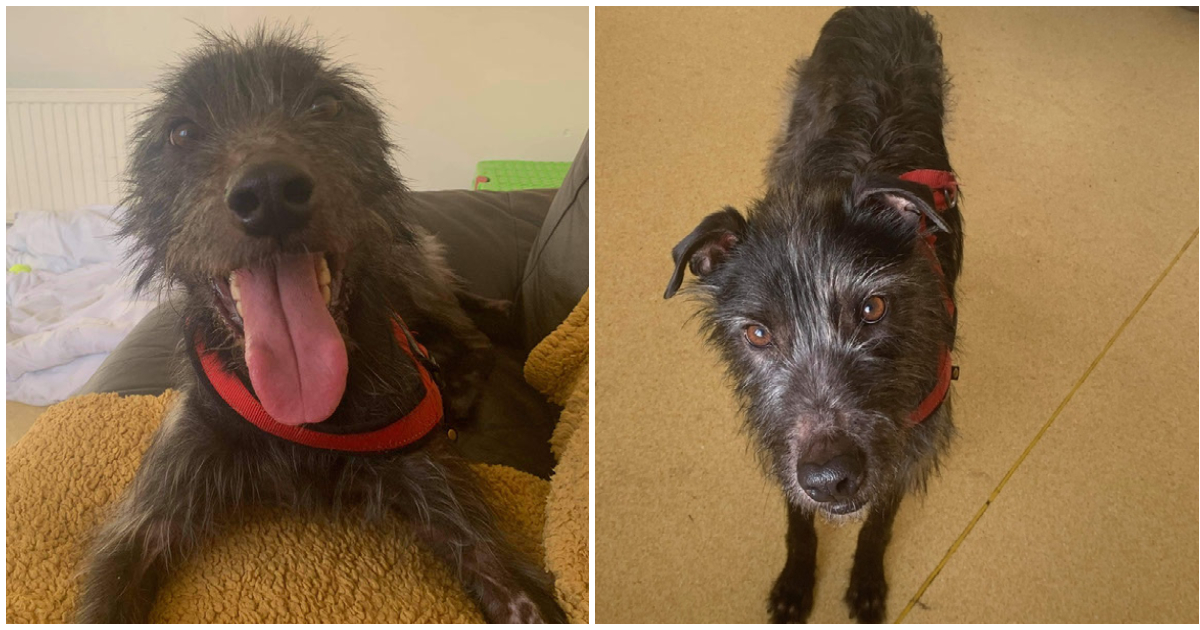 The conditions some dogs are forced to live in can be shocking. So many are stuck in situations that cause physical and mental anguish and can be found literally wasting away.

Their only hope is to be rescued, given the love they need and maybe even find a good new home. That’s the case for one poor dog, who was found in a life of squalor — but now is seeing hope for the first time.

According to the Liverpool Echo, RSPCA animal investigator Pamela Bird responded to a call about a three-year-old lurcher cross named Rodney. The dog had been found by an estate agent carrying out an eviction at a home in Huyton, England living in terrible conditions.

The RSPCA agent arrived on the scene and discovered an emaciated dog, so thin his bones were sticking out, living in a wet kennel.

Even worse, he had a severely damaged tail. He had been biting it, like due to stress and hunger.

“Poor Rodney was so stressed with being left on his own for such long periods of time without interaction that he chewed his own tail and had to have it amputated halfway up,” RSPCA welfare team leader Alana Bibby told the Echo.

Rodney had been in the damp cage for weeks, with his owner only stopping to feed him every few days. The owner agreed to surrender the dog to the RSPCA, so Rodney could get the help he needed.

He was taken to the hospital, and has been recovering with the RSPCA. But despite everything he’s been through, and despite losing half his tail, Rodney is still in good spirits.

“He now has half a tail but still enthusiastically wags it,” Alana said.

Rodney recovered quickly, and was soon unrecognizable from the poor starving dog rescued from the kennel.

The only thing to do now was find his forever home. But the RSPCA was concerned homing Rodney wouldn’t be easy, given his rough upbringing.

“He walks well and gets on well with other dogs – but because he has never lived in a home before he will need someone with patience to care for him,” Alana told the Echo.

“They will have to treat him like a puppy and start from scratch with training him – but he will do well because he is a very bright dog who is so eager to please.”

But now it seems like Rodney won’t have as much trouble as they thought. His heartbreaking story touched many people online… many of whom wanted to give him the happy home he deserves.

According to an update from the Liverpool Echo, “hundreds” of people have now reached out looking to adopt Rodney.

With so many interested adopters, it seems likely this good boy won’t have to wait much longer — and he can start living the happy life he’s always dreamed of.

“It seems he is keen to make up for lost time as we believe he was left in a kennel for long periods of time and has probably never lived in a home,” Alana said.

“He’s a lovely and affectionate dog who deserves the best of home.”

It’s sad that Rodney had to go through all he did, but it seems like there’s finally a light at the end of the tunnel now. Hopefully he gets the best possible home soon!