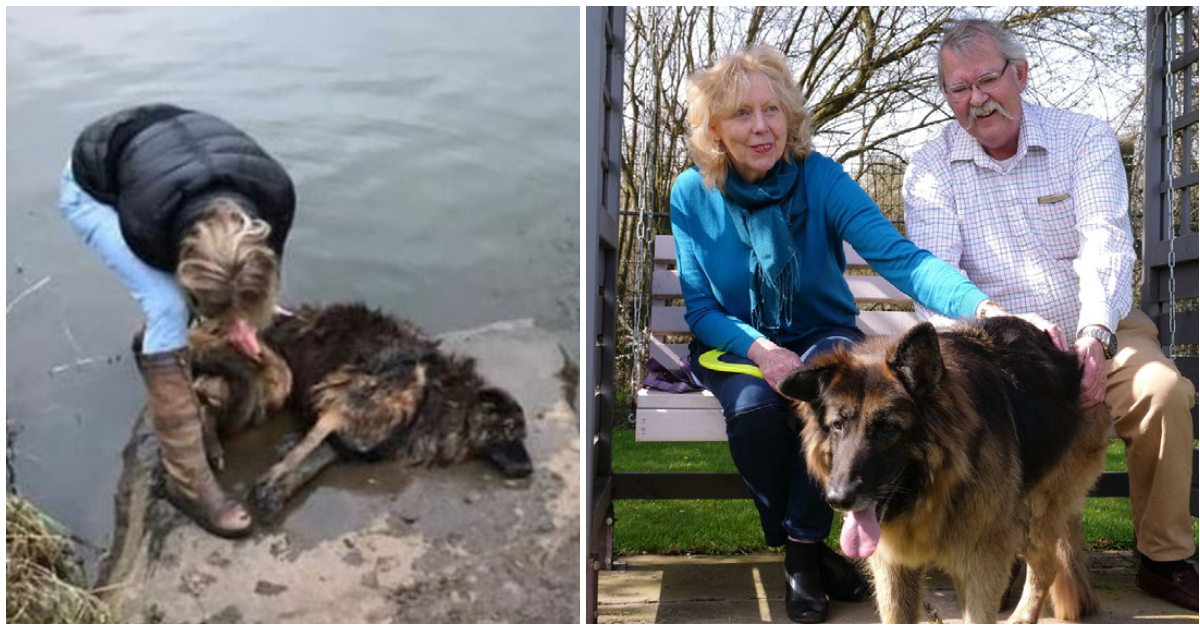 It’s shocking how cruel some people can be to their dogs. We’ve seen too many stories of people leaving their pets for dead, or worse, actively trying to kill them.

Like one shocking case from last year, in which a woman attempted to drown her dog by tying her to a rock. But now, in an inspiring update, the dog has a loving new home.

Last January, a woman named Jane Harper was out for a walk by the River Trent in England when she saw a dog struggling in the freezing water.

She went in to rescue the dog, and discovered she was attached by her leash to a large rock. It was clear that someone was trying to drown the poor dog.

“She literally fought to get her head above water and managed to rest it on a step,” Jane told the Daily Mail.

“How could anyone do this to her? I don’t know how long she had been in the water but I don’t think she could have survived much longer. It was just so cruel.”

Luckily, the dog — identified as a 10-year-old Belgian shepherd named Bella — survived, and was taken to a local vet for emergency treatment. She was later transferred to the RSPCA Radcliffe Animal Centre in Nottingham.

A vet said the dog would’ve soon died if she hadn’t been found. “She was severely hypoglycemic, hypothermic and tremmering to the point where she could not stand. If she had not been treated at this stage it is likely she would have died,” a vet told ITV.

Through Bella’s microchip, authorities were able to identify her owner as 31-year-old Carlene Latham, who admitted to attempting to drown her dog and pleaded guilty.

She received a 12-month community order, was ordered to pay a £80 fine and  £200 in costs. She was also disqualified from keeping a dog for the next three years.

Meanwhile, Bella, now 11, has spent the last year recovering and rehabilitating with the RSPCA. But now, she’s finally taking the next step and going to hew new forever home.

Maggie Mellish and Charlie Douglas, from South Derbyshire, saw Bella’s story and were deeply moved, and felt they could be the perfect family to care for this dog who had been through so much.

“We know she will need regular vet appointments and are willing to finance those,” Maggie said, according to ITV. The family have owned three shepherd-type dogs over the past 30 years.

“We know she is in her older years but we just want to offer her a loving home she so deserves after all she has been through.”

Maggie and Charlie adopted Bella from the RSPCA, and in honor of the big occasion, Bella also reunited with the woman who first saved her life.

“It is quite emotional seeing Bella as it brings back memories of that terrible day,” said Jane Harper reuniting with Bella. “We are thrilled to see how she has been transformed by staff here at the RSPCA.”

It’s a bittersweet moment for everyone at the RSPCA, who have cared for this beautiful dog for the past year, but they’re so happy that she has found the perfect home.

“We will all miss Bella very much but feel a sense of peace and accomplishment that she has now found such a wonderful home,” the RSPCA wrote on Facebook.

“Bella has been courageous throughout and she truly is a very special dog. She definitely deserves her place in the hearts of many across the world.”

We’re so glad Bella has a great home after everything she went through. Share this great news!